Work starts on $5.5B Scarborough Subway Extension after years of tense debate 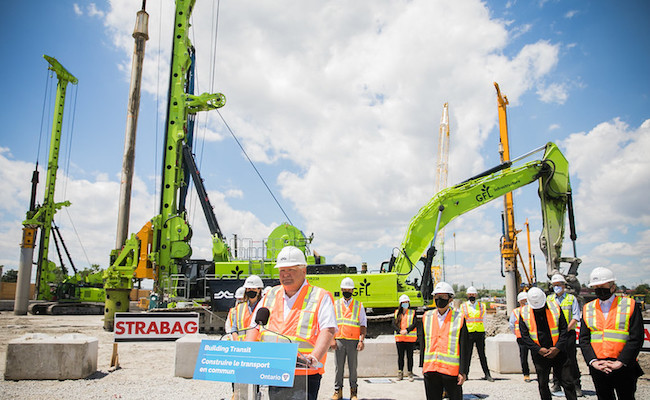 Ford and other officials marked the official start of construction on the project June 23. PHOTO: Province of Ontario

After more than a decade of study, raucous and repeated Toronto City Council clashes, and several provincial government interjections, construction has started on the Scarborough Subway Extension.

Following preparatory work this spring, the build team, headed by Strabag, has begun construction on the launch shaft that will set tunnel boring machines to work beneath Scarborough.

Premier Doug Ford, Mayor John Tory and other officials were on-hand for the official groundbreaking for the three-stop extension to the Toronto subway’s Line 2 June 23. Nearly 10 years ago, Ford was among the city councillors weighing Scarborough transit options ranging from the three-stop subway, single-stop subway and a replacement light rail line.

“This long overdue project will create thousands of jobs, significantly increase ridership capacity and cut down daily travel times for more than a hundred thousand Scarborough commuters,” Ford said in a release, noting it is one of four “priority” projects the Ontario government is pushing forward.

Provincial agencies Infrastructure Ontario and Metrolinx awarded the Strabag team a $757.1 million fixed-price contract for the 7.8 kilometres of tunnelling work this May. The TBMs are scheduled to be launched next year.

Unbundled from the tunnelling component of the project, further contracts for station work, rolling stock and other aspects of the $5.5 billion extension will be awarded later.

Overall, the subway extension is expected to create up to 3,000 jobs per year during construction. According to Metroilnx, crews are aiming to have the line ready to passenger service by 2029-2030.