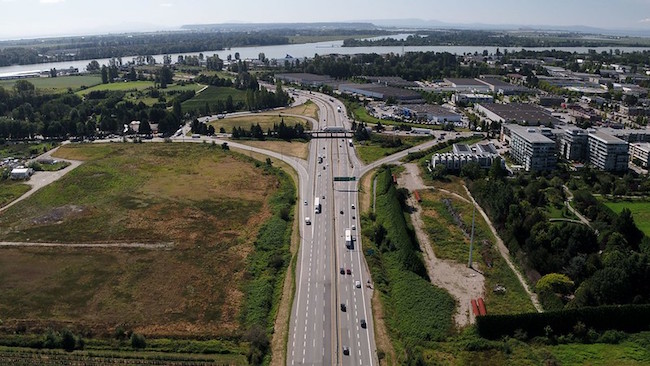 An aerial view of the Steveston Highway interchange. Hwy. 99 ducks into the Massey tunnel south of the interchange. PHOTO: Province of B.C.

A major roadwork project in Metro Vancouver has entered active procurement. Infrastructure BC, alongside the Transportation Investment Corp. and the province’s Ministry of Transportation and Infrastructure, issued a request for qualifications June 22 for the Steveston Interchange Project.

The work includes replacing what is currently a two-lane overpass crossing Highway 99 with a five-lane bridge that also includes space for pedestrians and cyclists. A precursor to upcoming work to replace the George Massey Tunnel — immediately south of the interchange — the project is expected to cost $87.5 million.

Related improvements that will add bus-on-shoulder lanes to Hwy. 99 will also be tendered this week, the province said.

Rob Fleming, B.C.’s minister of Transportation and Infrastructure said the project will help relieve pressure at the Steveston Highway “bottleneck.”

“With these improvements, and a new crossing to replace the old George Massey Tunnel, we’ll improve safety, reliability and connectivity on the Highway 99 corridor on both sides of the Fraser River,” Fleming said in a release.

The trajectory of the far larger project to replace the tunnel connecting Richmond and Delta remains unclear. The B.C. government said June 22 it has completed its review of the business case for the long-debated infrastructure job and that discussions are ongoing with Ottawa over a cost-sharing agreement.

With the release of the Steveston interchange RFQ, BC Infrastructure noted it plans to issue a request for proposals for the project this fall. The Crown agency expects to pick a winning bidder for the roadwork and begin construction in 2022. Work is scheduled to run through 2025.