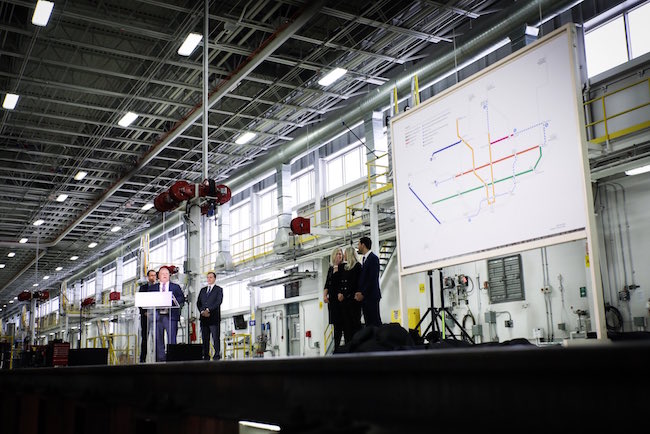 Scheer was joined by Markham mayor, Frank Scarpitti and Richmond Hill mayor, David Barrow when he announced his commitment to both the Yonge Extension and the Ontario Line.

“The Ontario Line and the Yonge Subway Extension are two great examples of projects that reduce commute times and relieve traffic congestion for hardworking commuters,” Scheer said in a release. “These are exactly the kind of infrastructure projects a new Conservative government will prioritize.”

The Ontario Line is projected to cost $10.9 billion. The province says it could be completed by 2027. The Ontario PC government first proposed the line earlier this year, replacing the so-called Relief Line the City of Toronto had spent years planning.

The Relief Line, which was supposed to begin at Osgoode Station and continue east along Queen Street before veering north and terminating at Pape Station, has been put on the back burner as a result of the proposed Ontario Line. The provincially-backed 15-kilometre addition would connect Exhibition GO Station with the Ontario Science Centre at Don Mills Road and Eglinton Avenue, increasing rider capacity by 30 per cent.

This multibillion-dollar project would be another boon for Toronto’s transit construction crews, who are currently building the 19-kilometre Eglinton Crosstown LRT. The light rail line is projected to cost $9.1 billion to build and maintain and has been under construction since 2016.

While the Ontario Line is good news to some, many are skeptical of its constructability — especially when it comes to building under one of the city’s busiest neighbourhoods.

“When you get to Bathurst and Front. you’ll have to go under North America’s busiest rail corridor,” Adam Vaughan, Liberal candidate for Spadina-Fort York, said on Twitter. “You’ll have to run the line under every condo in one of the densest neighbourhoods in the city and under the Gardiner Expressway. This is lake fill. Going under this requires going many metres below the water line.”

Vaughan, among other critics, has affirmed the project will never be built.

Scheer has not specified how much his government will allocate towards the project if elected.

The federal Liberals, meanwhile, have not committed any funding towards the Ontario Line. According to CBC, the current government will not award funding for the Ontario Line until they receive a business case from the Ontario government outlining the details of the project.