Iqaluit hotel ‘first of many’ time- and cost-saving projects for Stack Modular, Bird 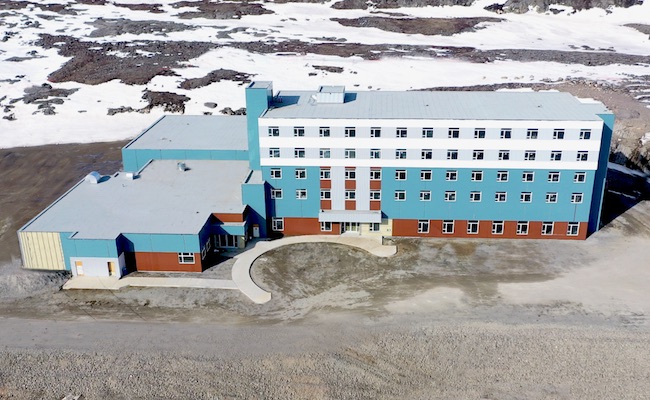 The exterior of the new Aqsarniit Hotel and Conference Centre in Iqaluit. The team says the design of the structure, clad with LED-illuminated glass and steel, pays homage to the northern lights. PHOTO: Stack Modular

At most hotels, it’s the guests who have done the travelling. But at the new Aqsarniit Hotel and Conference Centre, which opened its doors in Iqaluit in late 2020, the hotel itself — or the vast majority of it — is something of a globetrotter.

The 94-room hotel was built predominantly at Stack Modular’s manufacturing facility in Shanghai. The near-complete components then traversed the Pacific, eventually reaching Baffin Island and the Iqaluit worksite where they were assembled. Roughly 80 per cent of the hotel’s suites were completed off-site, Stack says, preventing the majority of the wrestling with the Nunavut capital’s sometimes challenging weather.

Along with taking on the assembly of the guest rooms — a process that took just nine days — local crews tackled the more conventional construction of the adjoining 5,000 sq. ft. conference centre and exterior building envelope. All told, work on the hotel took about two years.

“Our modular solution significantly reduced the cost of a site-built budget and reduced the total schedule, which supported an attractive ROI projection for our client,” Jim Dunn, Stack’s CEO, said in a release.

Built for the Inuit-owned Qikiqtaaluk Business Development Corp., the completion of the Aqsarniit Hotel marked the end of the first collaborative project between Stack and Bird Construction Inc. The Mississauga, Ont.-based contractor bought a 50 per cent stake in the modular builder back in 2017.

“This hotel is a great example of an innovative, socially, and environmentally responsible build, incorporating local labour, constructing with a low waste method, and delivering a highly energy efficient solution,” Teri McKibbon, Bird’s president and CEO, said in a release “The completion of this project is just the first of many that demonstrate our turnkey modular builds can rival the most advanced onsite projects without compromise.”

To cap off the project, the two companies announced April 9 that the hotel had earned a first place award from the Modular Building Institute for a permanent modular hotel over 10,000 sq. ft. Among other notables, the team designed the hotel with outboard insulation to optimize thermal performance, helping to create an energy-efficient building envelope. The design choice makes the 90,000 sq. ft (8,350 metres square) building roughly 10 per cent more energy efficient than a conventional building, the companies say — a valuable attribute in one of the country’s coldest climates.

With their first joint project under their belts, Stack and Bird say they are looking to employ their modular approach on a range of upcoming projects, from student and senior residences to affordable housing. Modular construction using pre-fabricated components has seen significant growth across Canada in recent years, with many contractors expanding their capabilities in the space.

Just last month, Bird won a contract to build modular expansions at corrections facilities in Thunder Bay and Kenora, Ont. It said it would deliver the projects through its partnership with Stack.

“Through our flexible overhead model, and ability to complete most of the work in a factory-like setting while concurrently completing site-built components, we can reduce exposure to market risks and enable better quality-control mechanisms,” Dunn said.