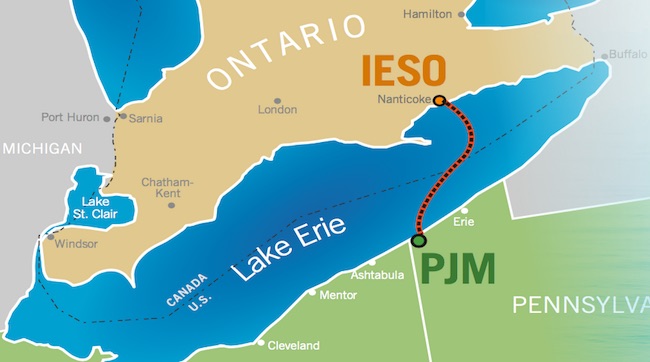 The approximately route of the underwater transmission line that would link the networks of the Ontario Independent Electricity System Operator (IESO) and PJM Interconnection. PHOTO: ITC Holdings/Handout

Under terms of the agreement in principle, the Canada Infrastructure Bank will invest up to $655 million or 40 per cent of the project cost.

ITC, a subsidiary of Fortis Inc., and private sector lenders will invest up to $1.05 billion.

The Lake Erie Connector is a proposed 117-kilometre underwater transmission line connecting Ontario with the PJM Interconnection on the U.S. side of the lake.

ITC acquired the project in August 2014 and has received all necessary regulatory and permitting approvals.

The CIB expects the deal to close later this year, pending final project transmission agreements, with construction to start soon after. Once work gets underway, the project is expected to create 383 construction jobs.