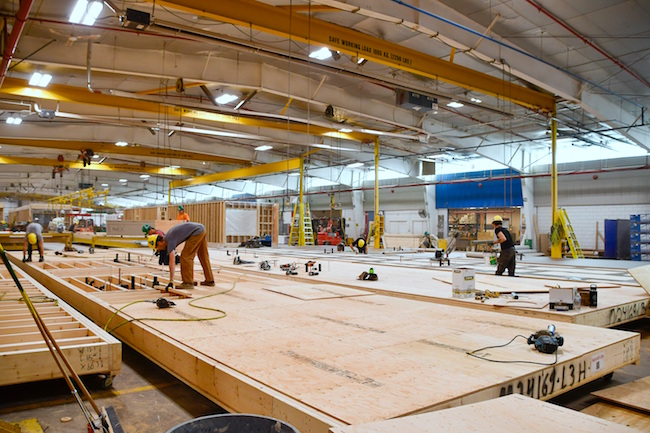 At the peak of the Alberta’s oil boom in the early 2010s, Horizon North Logistics Inc. couldn’t turn out work trailers and lodges quickly enough. Its manufacturing facilities were kept humming, putting together thousands of camp rooms destined for the Fort McMurray area or other remote project hubs.

But as crude prices plunged at the end of 2014 and the flow of workers heading north dried up, the company was forced to adapt. Taking stock of its capabilities, it shifted some of its focus from temporary workforce accommodations to permanent buildings.

“We changed out the nature of our quality, our cost structure, our software, architectural designs, the quality of the sales strategy we had, the balance sheets — and effectively converted what I’d characterize as a trailer manufacturing plant into a de facto auto plant,” says Rod Graham, Horizon North’s president and CEO.

Bringing experts from major carmakers aboard to optimize floor space and fine-tune quality, the company established the foundation for its modular construction business. Despite its track record with trailers and lodges, the transition wasn’t easy.

“Just because you can build a camp or an office trailer, doesn’t mean that you can actually build some space that’s got a commercial application,” Graham says.

That interior-only dynamic has changed dramatically as the company has pushed into the nascent markets for multi-unit modular builds. Today, Horizon North operates plants in Kamloops, B.C., Calgary and Grimsby, Ont., and is seeing increased demand for student, senior and affordable housing.

The Calgary-based company’s journey from work camps to modular isn’t exactly typical for the building industry, but it reflects the widespread momentum for off-site construction. Many traditional on-site contractors are also embracing the controlled environments and lucrative timeline savings offered by modular plants.

According to research conducted by On-Site last month, more than half of the largest builders in the country are either considering or already moving into off-site construction.

Just over 13 per cent of the more than 100 large Canadian contractors surveyed aim to move as much work off-site as possible in the coming years. One-fifth are shifting to modular, but only for certain aspects of projects, and another 20 per cent are considering it, but awaiting for analysis into the pros and cons. About 40 per cent, on the other hand, see modular as unrealistic for their scope of work. 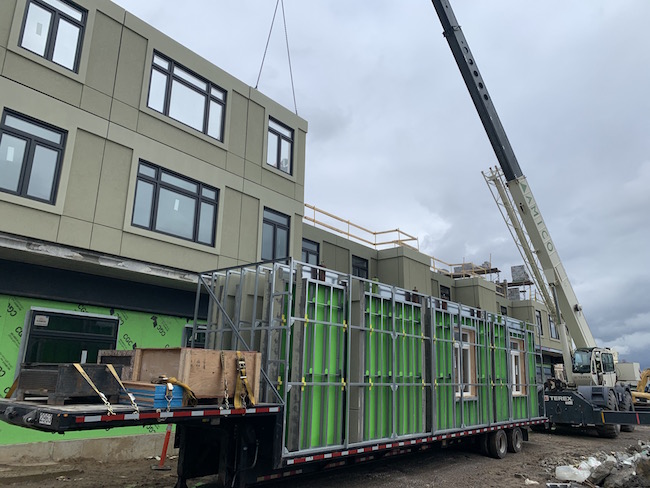 Amico Infrastructures Inc. is one of the traditional contractors expanding into the modular space. Through its A-Linx Building Technologies subsidiary, the company opened a manufacturing facility adjacent to its headquarters outside Windsor, Ont. four years ago. It’s since put up a handful of multi-unit residential projects, primarily seniors’ homes, across southwestern Ontario.

“The future is bright, obviously, with this construction because not only does it save time, it saves money overall when it comes to speed of construction.” says Dave Hunter, the senior manager of business development with A-Linx.

Like Horizon North, the company has looked to the auto industry as the basis for its manufacturing. Before landing at A-Linx, Matt Pellitteri, the company’s plant manager, took on a range of roles at the Windsor Chrysler plant, which builds the Pacifica minivan. With a background in lean manufacturing, Pellitteri applies this low-waste, high-optimization approach to building the company’s load-bearing wall systems.

The light-gauge steel panels are manufactured similarly to how you’d build an engine at a sub-assembly plant, he says.

“All these parts are introduced into a framing table,” Pellitteri says. “Inversely, if you were in the field and you were doing it with wood, you would have a guy with a saw, he’d be cutting it piece by piece and he’d be building it up while all our pieces are sub-assembled and introduced into a panel.”

One of the main draws of the A-Linx system is its ability to provide the entire superstructure.

“We can go in there and we can go from footings to roof and not many other outfits are providing that right now,” Pellitteri says. “That’s what people are gravitating toward. One trade, one quote, you’re getting your flooring system, your load-bearing interior and exterior walls, shafts and we coordinate the structure steel as well.”

With its manufacturing base in Oldcastle, Ont., the company is targeting the Ontario market, and looking to jump the river into Michigan and other nearby states. As in other industries, ground transportation for modular construction can become cost inhibitive as you ship farther afield.

With this in mind, Bird Construction Inc. is taking a different approach. In 2017 it acquired a 50 per cent stake in Stack Modular Structures Ltd., which manufactures its turnkey structural steel building modules in China and then ships them across the Pacific.

Andy Berube, vice-president of sales and marketing at Stack Modular, said its plant in Shanghai lets it leverage the global supply chain while keeping transportation costs consistent for cities across the west coast of North America — from San Diego to Anchorage.

Like other modular companies, Berube says the market has been growing rapidly as architects, developers and contractors become more receptive to off-site construction.

“I would say, over the last two years, maybe a little bit more, the interest has been escalating ten-fold,” he says, pointing to affordable housing projects in Vancouver and other areas on the Pacific coast as particularly promising.

Given Bird Construction’s stake in the company, Stack Modular can take care of on-site installation in-house, but will also partner with other contractors on stacking the modules and finalizing the projects by connecting the mechanical, electrical and plumbing systems. 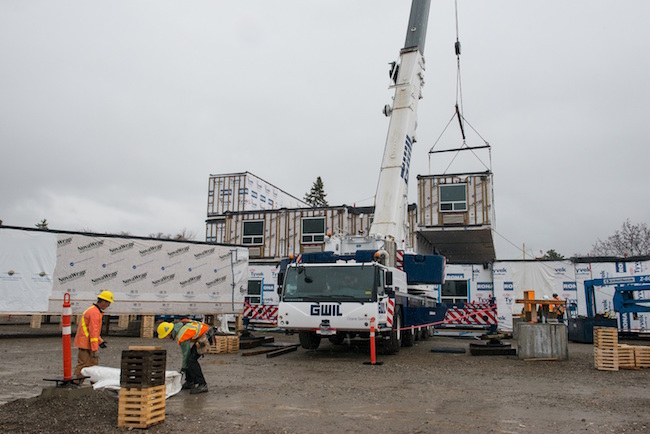 Horizon North and other modular builders can take on a wide range of projects from parking kiosks to multi-storey residential buildings. PHOTO: Horizon North

According to Joe Kiss, Horizon North’s president of Modular Solutions, the company’s niche is primarily multi-storey projects, with a focus on hotels, student, senior and affordable housing. But its products run the gamut.

“We do everything from a small parking kiosk where you would pay for your parking as you exited the parkade, to a lot of specialty applications like convenience stores, for instance, Petro Canadas and A&Ws,” he says.

PCL Construction, for instance, has begun manufacturing wall panels, washroom pods and several other products at off-site facilities. The components are shipped to job sites to complement and speed up the conventional construction process.

In the case of a washroom pod, concrete crews on-site leave a depression for the module as they pour the slab, while pre-fab teams at the modular plant assemble the washroom. Schedules are aligned so the finished pod arrives at the job site in time to be integrated. The method allows contractors to slim down on the number of workers needed on-site and build in a controlled environment.

“As we’ve had more cases come together, more projects built with this model, across North America, across the globe, people are really jumping on that,” says Troy Galvin, manager of PCL’s Agile plant in the Toronto suburbs.

While the shift to modular and prefabrication has been underway for several years, the COVID-19 crisis looks likely to accelerate the trend.

Prior to the pandemic, Galvin was anticipating blistering growth in off-site construction of around 300 per cent over the next three years. Now, he says the emphasis on speed and the need to limit the size of on-site crews will push the modular market to as much as five-times its current size. 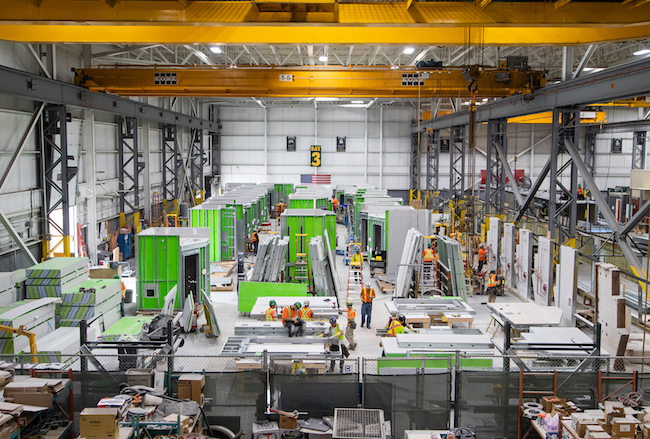 The shop floor at a PCL modular facility. The company produces a range of building components and complete structures at its off-site operations. PHOTO: PCL

“A lot of this is about speed to market and through the pandemic, he says. “It’s really highlighted [the mentality that], ‘Hey we need infrastructure fast, we need it now, what do you have existing in your fleet or how quickly can you build us something?’”

At the same time, modular plants with fixed washrooms and no weather are more conducive to some of the health regulations builders have adopted to stop the spread of the virus than many job sites, Galvin says.

Similarly, Kiss says many of the problems the COVID crisis has created fall “into the wheelhouse” of off-site construction.

“Modular is definitely a pretty good tool in the toolbox in terms of responding to the crisis both in the near-term, medium-term and long-term,” he says.

But it’s not the only catalyst, he adds.

“There’s other trends beyond COVID that are doing that,” he says. “Just the very nature of having to build buildings more efficiently and more cost effectively, and quicker and with more cost predictability and cost certainty. Those are driving factors as well.”

This article originally appeared in the June 2020 issue of On-Site. To read through the entire issue, click here.