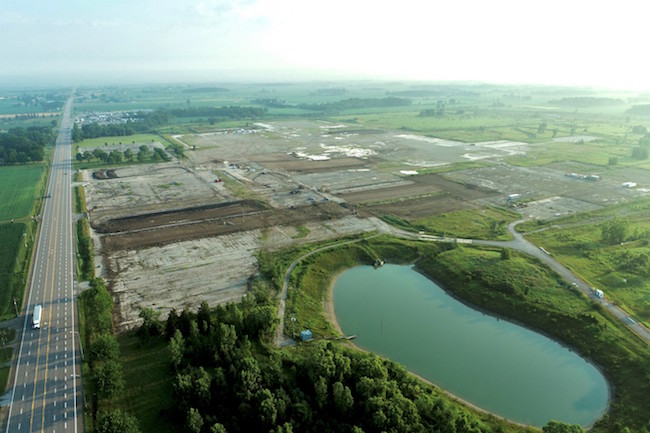 The 622-acre site has sat vacant for a decade. Grading and soil remediation is now underway. PHOTO: Broccolini

The site of a former Ford Motor Co. manufacturing plant, where thousands of Crown Vics and Lincoln Town Cars once rolled off the line, has been snapped up by developer and construction firm Broccolini.

The Quebec-based company said July 8 it has purchased the 622 acres of land in Southwold, Ont. — just outside London — and is drawing up plans to redevelop it. Financial terms were not disclosed.

Built in the late ’60s, the Ford Saint Thomas Assembly Plant closed its doors in 2011. A solar installation was proposed for the site in the interim, but the clean energy project never came to fruition.

“This will bring significant and sustained employment opportunities back to the Township of Southwold and Elgin County,” Beach said in a release.

Broccolini’s leading role in several Amazon.com Inc. fulfillment centre projects in both Ontario and Quebec have fuelled recent speculation the U.S. online retail giant is eying the site for its latest hub.

“Specific uses” for the land have yet to be confirmed, Broccolini said July 8. Nevertheless, the company has begun early work on-site. Grading and soil decontamination activities are ongoing “to ensure the land is prepared for immediate redevelopment.”