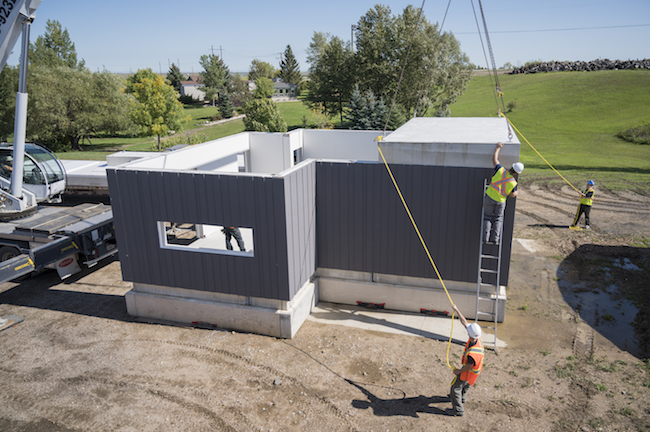 The company plans to flat pack its building components to be shipped to job sites and assembled. PHOTO: Nexii

Nexii Building Solutions Inc. announced plans to invest in the new commercial-scale plant late last month and has begun renovating an existing facility in Squamish, B.C. to fit its purposes.

“We’re shooting for initial start-up in low volumes in June or July of this year and are looking to have full production toward the end of the year,” he said in an interview.

The company did not disclose the exact cost of the investment, but Sidwell said the project will run into the tens of millions of dollars. The new facility will greatly increase Nexii’s scale after a successful pilot of its building system and production process at a 20,000 sq. ft. plant in Moose Jaw, Sask. 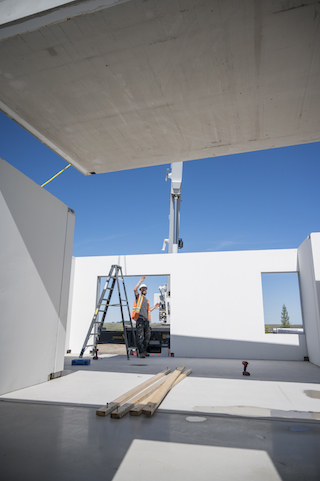 The company’s founders have built a half dozen buildings, from single family homes to a senior’s residence, using Nexiite, so far. PHOTO: Nexii

At the centre of the new building system is a proprietary material the company calls Nexiite. For now, the formula for the lightweight composite is a tightly guarded secret.

“What’s available for viewing for the public is pretty minimal at the moment until we get a number of patents filed on it, which we’re expecting will be in the next 60 or 90 days,” Sidwell said.

Sidwell was willing to share that Nexiite is about half sand. The other 50 per cent of its makeup is a blend of “readily-available” materials. To form its building panels, the company uses an approximately half-inch layer of Nexiite on each side of a conventional insulating core.

“The Nexiite is both the interior and exterior finishing and is structural,” Sidwell said. “So, it’s a completely different methodology of construction.”

So far, the company’s founders have put up a half dozen buildings — from single family homes to a senior’s residence — in Moose Jaw using the method. Sidwell, a serial entrepreneur who came out of retirement to lead the company, joined the founding brothers — Ben and Michael Dombowsky — about 15 months ago. More recently, Gregor Robertson, a former Vancouver mayor, signed on as executive vice-president of strategy and partnerships.

The team sees few limitations to what types of buildings its system can be used on.

“It will really run the gamut,” Sidwell said. “We can do high-rise cladding — so the exterior envelope of high-rise buildings, where there would still be a traditional steel and concrete core — we can do commercial and industrial buildings, as well as multi-family and single-family as well. There’s really no limitation to what the Nexii building system can do both from an architectural perspective and the type of buildings.”

On projects for which the company is currently offering “complete solutions,” Nexii materials comprise around 60 per cent of the building, Sidwell noted. In the near future, it plans to begin incorporating other modular components such as kitchen or washroom pods, which could boost that figure to as high as 85 per cent.

“We kind of consider ourselves as a pre-fabrication site or system where we flat pack on a semi and then deliver to the job site and crane into place our very large platform panels in a fraction of the time it would take [for conventional construction],” he said. “We typically reduce on-site construction anywhere from 65 to 90 per cent.”

The company is jumping into the pre-fab building market at a busy time. Off-site construction is expected to continue to gain traction across Canada as builders see the cost and timeline benefits of moving away from stick building. PCL Constructors Inc., EllisDon Corp., and Bird Construction Inc. are just a few of the prominent Canadian contractors investing in modular construction facilities to do more work off the job site.

Forgoing conventional materials such as wood and steel, Nexii also sees itself as a cleantech alternative to traditional construction methods. The building system uses no Portland cement — an often criticized high emitter of greenhouse gas emission — and the company says buildings put up using its materials require less energy to heat and cool than conventional structures.

With the unique new offering, the company has a healthy pipeline of projects to keep the plant floor at the new facility north of Vancouver buzzing, Sidwell said. The Squamish site will create 150 new manufacturing jobs.

Meanwhile, construction companies and project developers interested in the new technology are getting up to speed. Nexii said it’s licensing a number of contractors and assemblers to work with its building system. Once crews have been retrained, they’re cleared to work with Nexii materials. The company would not disclose what contractors it’s currently working with.

As far as costs are concerned, Sidwell said Nexii is “very comparable” to traditional materials, even before factoring in savings such as faster construction and lower operating costs.

With initial production at the plant scheduled to start this summer, Nexii plans to have its first B.C. building under construction later this year.