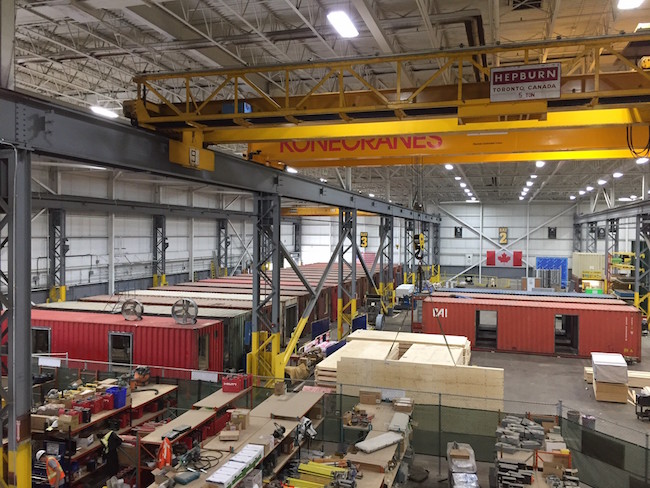 The shop floor at the Agile plant. The facility produces a wide range of products, from repurposed sea cans to prefabricated wall panels and washroom pods. PHOTO: PCL

With high-capacity gantry cranes overhead, 65,000 sq. ft. of well-lit floor space and products at various stages of completion strung out along a tidy assembly line, PCL Constructors Inc.’s Agile operation in the Toronto suburbs looks more like it’s run by a manufacturer than by one of the country’s largest construction contractors.

A crew of about 100 workers, including 35 from an array of subtrades, work the floor, producing everything from compact eyewash stations to decoupled washroom pods and 70-foot pedestrian bridges. Typical work site nuisances like dust, active heavy equipment and the sometimes-punishing Canadian weather are conspicuously absent.

As labour shortages and accelerated construction timelines force builders to modernize their strategies, the off-site facility is one part of the industry’s evolution.

“We take more of a manufacturing approach to building when we come off-site,” Troy Galvin, manager of PCL Agile, said in an interview. He pointed to standardized designs and repeatable functions that help workers perfect their skills.

“Over time, you do it more and more, you just get better at it. So, we deliver a higher quality product,” he added.

Integrating principles that have been ingrained in the manufacturing industry for decades has been slow process for construction, but the shift is underway. According to Galvin, booming demand has allowed the Agile plant to more than double its output over the past few years. Currently, the facility is at, or over capacity, turning out components that are integrated into both small jobs and those that run into the billions of dollars.

The plant’s output can be broken down into two main streams. Full volumetric builds are essentially complete structures assembled at the plant and then transported to their final location. Washroom pods or wall panels, on the other hand, are just a fraction of an overall construction project. These decoupled elements are assembled at PCL’s off-site facility and then incorporated on job sites as conventional construction progresses.

The process is a significant departure from typical construction, and for years faced a stigma among more conservative builders. According to Tom Hardiman, the CEO of the U.S.-based Modular Building Institute, modern challenges are beginning to turn this sort of thinking on its head. At a session focused on off-site construction at the Buildings Show in Toronto at the end of November, he detailed some of the segment’s biggest drivers.

“Every urban area has extremely high housing costs, either high labour costs or no labour availability, and then rising material costs,” he said. “All of these things are kind of coming together to form this perfect storm of: ‘Oh my gosh we can’t keep building the way we’ve been building, it’s just not working.’” 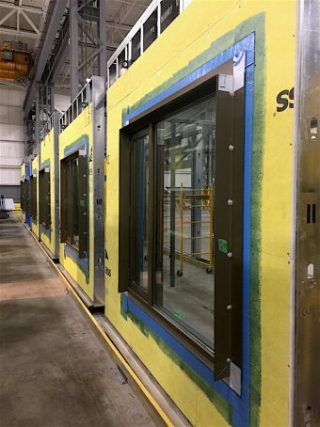 Turning to modular doesn’t necessarily bring down overall project costs, though it can in some cases. Still, taking even some work off-site saves builders considerably on time by reducing congestion on-site and, more importantly, allows crews both on- and off-location to build separate parts of the project at the same time.

“We’re talking about parallel activities, so we see a compressed schedule or a shortened build schedule and a lot of times early revenue recognition for owners, which is a huge value add for them,” Galvin said.

For crews on the job site, working with pre-fab components is still relatively new, but workers are becoming more comfortable with the process, according Kyle Sandiford, a superintendent at PCL who works on modular builds.

“We have a solid crew of workers that have worked on our various modular installs and they find it very exciting,” he said. “They can use their typical skill-sets, but they can apply it to something that’s new.”

The logistics of moving large modules or entire pre-assembled buildings into place also requires plenty of heavy equipment – an easy sell for most teams.

“The guys, I don’t know if it’s to the nature or what, but everybody tends to like working with heavy equipment,” Sandiford added. “They kind of enjoy the craneage part of it. It’s pretty exciting.”

For full volumetric modular builds, where as much as 90 per cent of the work can be taken off-site, projects typically come together very quickly. Job site crews focus mainly prep and join modules to foundations at what’s known as the mateline. Mechanical and electric connections are then made, typically through access panels, and finishers fill any gaps in flooring or drywall.

In component builds, far more of the work is done on-site, meaning work schedules need to be synchronized so modules arrive at the job when they’re needed.

In a large project — a hospital for instance — crews pouring concrete leave a depression in the slab as the module is fabricated off-site. The pod is then shipped to site to be integrated.

“We lift it up onto the floor that it’s final location will be with the crane,” Sandiford said. “We roll it into place, into the depression so that the floor finishes will match up, and then we grout it into place and any tie-ins can happen into the pod.”

“The drywallers will build up to the pod and then they’ll continue building around the pod to incorporate it into the finished aspect of the building,” he added.

Unlike conventional stick builds that can only progress sequentially, modular construction allows for parallel activities. In this case, as crews pour concrete on-site, off-site workers fabricate the mods that will arrive at the job site once the groundwork is in place. 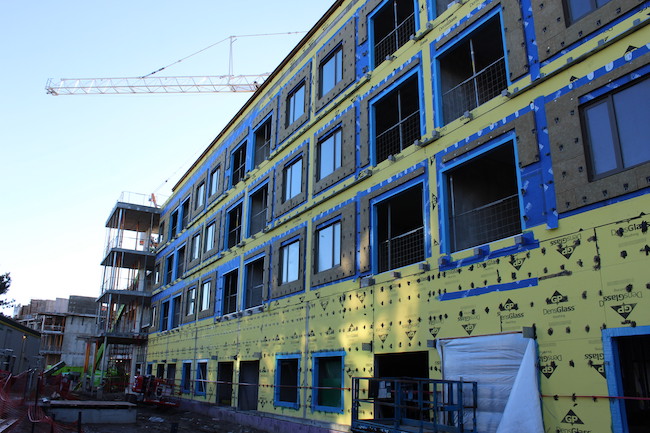 For large projects like hospitals, only about five to 10 per cent of the work is currently shifted off-site, Galvin said. This could easily increase as modular becomes more ingrained in project design, he noted, though exactly how much builders will do on- or off-site will remain project-dependent.

No matter where this balance is eventually struck, one thing is clear: off-site construction has made huge strides over the previous few years. It’s gone from a niche practice to a real consideration for a whole range of projects — from major commercial and institutional work to homes and mutli-unit residential.

Meanwhile, PCL isn’t the only Canadian contractor expanding in the space.

Bird Construction Inc., for instance, acquired a 50 per cent stake in the Stack Modular Group of Companies last fall. The Vancouver-based firm manufactures steel-framed modules at a subsidiary in Shanghai. At the time, the company’s president and CEO, Ian Boyd, said the company sees significant opportunity is the prefabrication market in the coming years.

This spring, another of the country’s top contractors, EllisDon, joined forces with Calgary-based Horizon North Logistics Inc. on modular work by signing a master teaming agreement. Horizon North is better known for its temporary work camps, but has begun adapting its knowhow to permanent modular buildings in the commercial and residential markets.

As the major players refine their off-site processes and begin incorporating modular on more projects across the country, the unconventional strategy is likely to relieve some of the cost and labour pressures currently squeezing builders.

Hardiman expects to keep seeing strong growth in the North American modular space in the coming years as construction firms in Canada and the U.S. catch up with similar movements in Europe and Asia.

“I’m not suggesting that modular construction is the silver bullet or the answer, what I’m saying is we should be part of that toolkit,” he said.