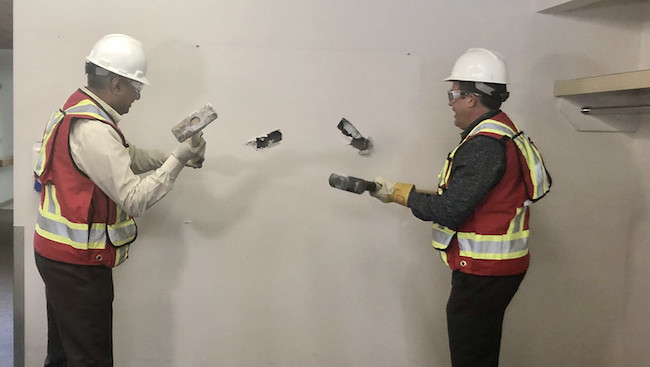 Minister of Infrastructure Prasad Panda and Patrick Dumelie, CEO of Covenant Health, took ceremonial swings to kick on the demolition phase of the expansion project. PHOTO: Government of Alberta/Flickr

A significant expansion project expected to take about three years is underway at Misericordia Hospital at the west end of Edmonton.

Sledge hammers in hand, government and hospital officials kicked off the demolition phase of the job late last week.

The project will add a new, approximately 50,000 sq. ft. (5,000 square-metre) emergency department at the west side of the hospital, effectively tripling the department’s current size and allowing for six ambulance bays, as well as waiting, treatment and diagnostic areas.

“Hundreds of skilled tradespeople and professionals in Alberta will be key to building a top-quality emergency department,” Prasad Panda, the province’s minister of Infrastructure, said in a release. “Following the demolition phase, we’ll bring in the big equipment and construction activities will start this summer running through to late 2022.”

PCL Constructors Inc. is spearheading the project as the general contractor. Demolition and remediation work on the hospital, which opened in 1969, is expected to take about four months. The Misericordia Hospital’s current chapel, its west annex and a family medicine practice were relocated to make way for the new facility.

Costs for the wider expansion will run to about $85 million. Along with the new emergency department that will serve about 60,000 patients each year, the work includes emergency power upgrades to accomodate the facility’s additional footprint.

The overall health care project is expected to created about 445 jobs during the construction phase.