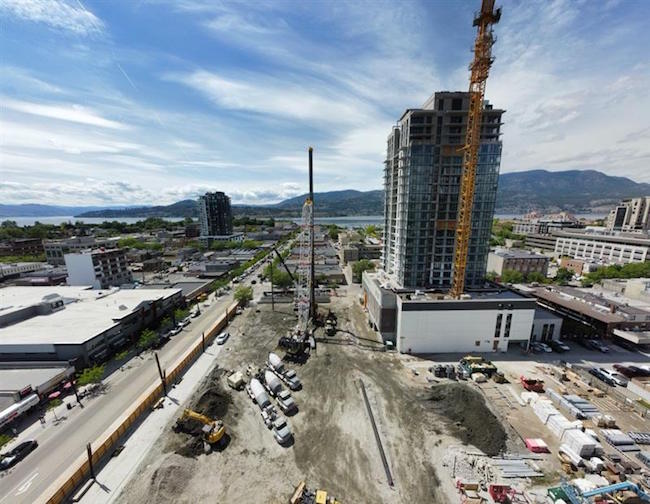 The continuous flight auger process is being used for two new towers that are part of the Bernard Block development in downtown Kelowna. PHOTO: SB Canada

In downtown Kelowna, a few blocks Okanagan Lake, construction crews are drilling deep beneath surface, building piles for a pair of new towers set to start rising shortly in one of Canada’s fastest-growing cities.

Employing a crane-mounted lead system, with a hollow stem auger capable of drilling and injecting concrete to depths of 52 metres (170 feet), this is not your typical drill rig. Custom parts were built and shipped both from across Canada and the U.K., making the complex piece of machinery the first of its kind in the Okanagan. The rig and the process it uses, known as continuous flight augering (CFA), reflects both the valley’s rapid urbanization and the focus the project’s builder is placing on minimizing noise and vibration in a busy part of Kelowna.

“Urban infill in Kelowna is, I would say, relatively new and so when you’re dealing with these tighter sites with existing buildings surrounding them, anything that we can do as a local builder to try and minimize the disturbances to surrounding businesses and homeowners is great,” he said.

Based in Kelowna and founded 2004, Mission Group is a vertically integrated development firm that leads construction on own its projects, including the three-tower Bernard Block development. Work is already nearing completion on the first stage of the mixed-use project, with a residential condo tower known as Brooklyn scheduled to be finished by the end of this year.

Work on the two other buildings is currently getting underway. For the Block, a 16-storey office building, and Bertam, a 34-storey residential tower, Mission Group has enlisted geotechnical specialist Soletanche Bachy Canada (SB Canada) to head the novel piling effort.

“Typically, you’re restricted to depths in the region of 25 to 35 metres with traditional equipment,” said Barry Evans, vice-president of Project Delivery, West, for SB Canada, adding that piecing together a system that would drill to 52 metres took some ingenuity. Specially-made parts from Bachy Soletanche in the U.K. and its sister company Berminghammer were also needed.

The depth the piling system can reach and its use of a crane as opposed to a conventional drill rig, is a first in Canada for the CFA application. The process itself is not new, however. Like many other construction techniques, the CFA method — also known as auger cast — is a European import, where it’s been in use for decades. 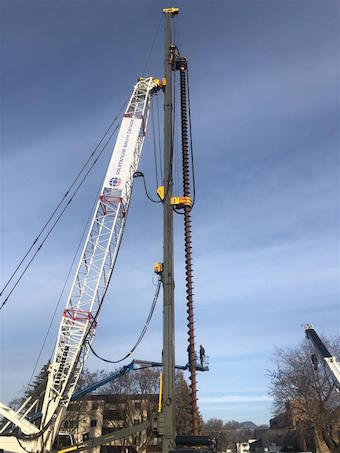 “We progress that auger by turning it into the ground to a proscribed design depth,” Evans said. “Once we reach that design depth, we lift the auger slightly and the discharge valves open on the bottom of the auger and then we start to pump the concrete in through the hollow stem of the auger. So, we actually build the pile from its toe upward under a head of pressure.”

“The auger holds spoil and then the head of concrete pushes up past the tip of the auger, so we always have positive pressure so that the pile wall is supported,” he adds.

Crews slowly withdraw the auger while pumping concrete, eventually leaving just a fluid column of concrete in the ground.

“Once the auger is fully retrieved and out of the hole, we move the machine onto the next pile position, we clean the top of the pile and we plunge the reinforcement into that fresh column of concrete,” Evans said, noting the company typically uses CFA-specific concrete with a slump north of 250 and a four-hour set delay in case there’s a mixer delayed on the road or any issue with equipment that would delay getting the rebar cage into the concrete.

Soil conditions and the goal of limiting noise in downtown are a couple of the key aspects of the Bernard Block project that turned the team onto CFA, Turri said.

“The water table in Kelowna, particularly in the areas closer to the lake like the downtown, require a fair amount of soil enhancement, soil preparation, whether that be piling or other methods to support some of these taller towers that are now become commonplace in Kelowna,” he said.

While driven steel piles are often quite loud, requiring vibratory hammers to drive pile to depth, CFA limits the noise.

“Whenever a pile driving rig shows up there are complaints, “Evans said, “and wherever you can drive a pile, you can do a CFA pile. The soil conditions are very, very similar.” With owners focussing more on community and environmental impact, Evans said he is seeing growing momentum for the CFA process throughout Western Canada, particularly in the Prairies, and now into B.C.

The eventful year in the commodity market also has owners looking to CFA for greater cost certainty.

“We’re not at risk of a 16-week lead time,” Evans said. “We’re not at risk of steel prices increasing every day. We have plenty of ready-mix concrete suppliers here in B.C. and reinforcement for the steel cages seems to be readily available, so people are starting to see the benefits.” 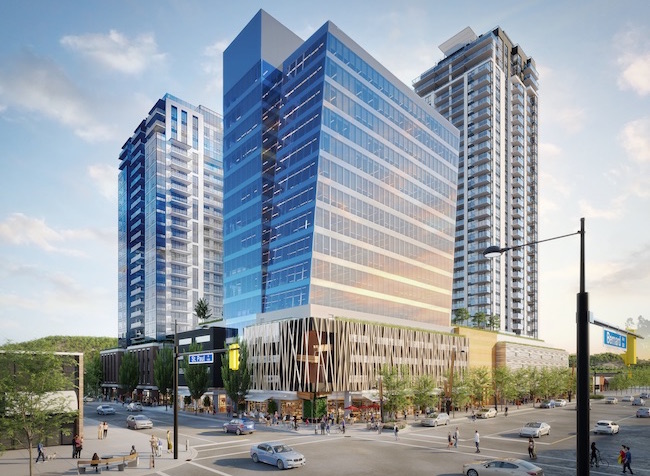 For its part, Mission Group sees the new type of piling as a great solution to the challenges it faces putting up larger and larger buildings in the Okanagan.

“It’s the type of system that as we’re moving ourselves into doing more concrete high-rise construction, they’re putting a lot more load on what are not great soils for construction of towers in the market that we work in,” Turri said.

Still, while CFA works well for Kelowna, it’s not for all locales, Evans noted. Regions where crews may encounter boulders or hard formations, for instance, are often not viable, and compact job sites can lead to challenges.

“If you’re on a tighter site, it can get very congested very quick because you need a concrete pump, excavator, there’s a hole bunch of other moving parts. The reinforcement is delivered to site and you have to store that somewhere,” he said.

Having just wrapped up the roughly eight-week piling process June 6, Mission Group has begun moving into construction of the parkade podium at the Block. To get to this point, Turri credits the geotechnical and structural teams for the long hours spent working on design and eventually, overseeing execution.

Evans, likewise, said the collaborative mindset Mission Group and the engineering team working on the project brought to the table made the novel approach possible.

Construction on the pair of new towers is scheduled to run through 2024.