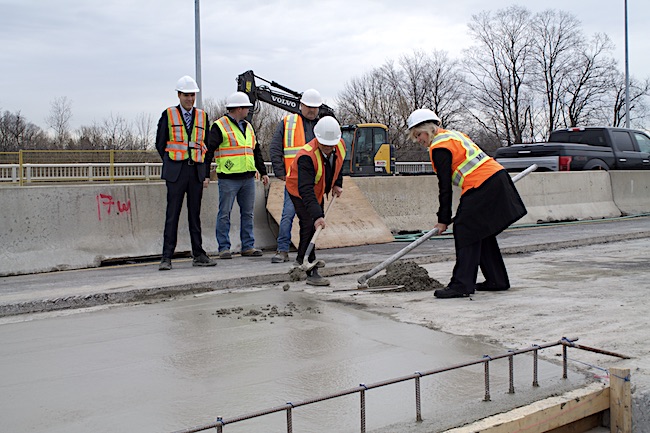 Mayor Bonnie Crombie finishing concrete at a job site in Mississauga. The $10 million project is one of many underway in the city

MISSISSAUGA, Ont.—More than 30 new and continuing road construction jobs are on the books this year in Ontario’s third largest city as Mississauga construction crews and commuters brace themselves for years of work on the Hurontario Light Rail Transit project.

Mayor Bonnie Crombie was on-site at a job on Mavis Road April 16 to officially kick off the city’s construction season.

“We are working to build Mississauga into a world class city and make our roads the best in the Greater Toronto Area (GTA),” Crombie said. “In order to move people and goods more efficiently and safely throughout our city, we need to continue to invest in improving our transportation network.”

The $10 million project includes upgrades to a bridge over Fletcher’s Creek and repaving work on Mavis Road north of Highway 401. Brampton, Ont.-based Four Seasons Site Development Ltd. is the general contractor for the project, while Marbridge Construction of Mississauga has been subcontracted to complete the bridge work. With completion expected this fall, the road work will increase capacity on Mavis Road before construction is expected to kick into high gear on the new LRT along nearby Hurontario Street.

Extra federal cash will also help Mississauga and other cities across the country fund further infrastructure projects this year. In its budget last month, Ottawa committed to doubling municipal funds from the federal gas tax for the year. Crombie said last month the windfall would net Mississauga about $80 million.

Meanwhile, an adjustment from the province has scaled back the scope of the Hurontario LRT project. Transit agency Metrolinx revised the route of the planned piece of transit infrastructure last month, cutting off a three-stop loop in downtown Mississauga. The crown-owned agency cited budget pressures for the decision. With the province footing the entire bill for the LRT, Crombie said at the time that the city will look at alternative financing options to get the loop built in the future.

Early construction, such as the relocation of utilities, is already underway on the LRT. The main work is expected to begin this year once Metrolinx and Infrastructure Ontario pick a winning bidder for the P3 project. The two government entities pared the list down to three construction consortia to design, build, finance, operate and maintain the project in August 2017, but have yet to decide on a winner.