Ontario is widening the four-kilometre stretch of Highway 401 from Hurontario Street to the Credit River in Mississauga from six to 12 lanes. One of more than 230 highway construction projects starting this year, the 401 expansion will improve traffic flow and support 800 construction jobs. 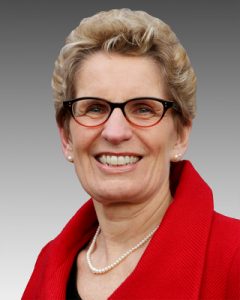 Premier Kathleen Wynne was in Mississauga April 15 with Transportation Minister Steven Del Duca to announce the start of construction on the $81-million project. This stretch of the 401, which is targeted for completion by fall 2019, will have 10 general purpose lanes and two High Occupancy Vehicle lanes.

“Adding six lanes on this stretch of Highway 401 will help improve traffic flow for residents and businesses. This project, and many other construction projects this summer, is further proof of our government’s commitment to provide accessible, modern transit infrastructure that will reduce commute times, create jobs and improve the quality of life for Ontarians,” Del Duca.

Ontario is investing more than $2.1 billion in road and bridge construction projects this year, creating or sustaining more than 21,000 jobs.

Widening Highway 401 is part of the largest infrastructure investment in Ontario’s history — about $160 billion over 12 years. This investment is supporting 110,000 jobs every year across the province, with projects such as roads, bridges, transit systems, schools and hospitals. In 2015, Ontario announced support for more than 325 projects that will keep people and goods moving, connect communities and improve quality of life.

“To build Ontario up, transportation infrastructure is critical. Families and businesses rely on highways like the 401 every day. By expanding and improving our highway network — including the 401 widening in Mississauga — we are helping to grow our economy and create jobs and new opportunities all across our province,” said Wynne