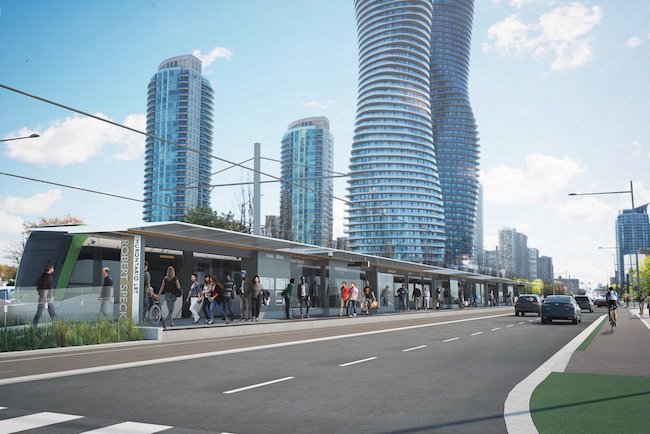 TORONTO—Ontario transit agency Metrolinx has revised the route of the soon-to-be-built Hurontario Light Rail Transit project, most notably chopping off a downtown loop included in the original plans.

The provincial crown agency pointed to “potential” budget pressures and “a more convenient route” as the motivation for the change. It said the province has already signed off on the scope changes to the $1.4 billion LRT.

“The changes have been designed to reduce project costs while still achieving the project goal of providing a fast, reliable and seamless customer experience between the new Hurontario LRT line, the GO Transit network, and the local transit systems,” Metrolinx said in a statement.

The redrawn LRT map simplifies the original plan by eliminating the Mississauga city centre loop that included three stops and circled the Square One Shopping Centre. The main 18-kilometre route running along Hurontario between the Port Credit GO station and the Brampton Gateway Terminal will remain intact.

Metrolinx also said it will include provisions in the contract that would accommodate the Mississauga loop and a possible extension farther into Brampton.

Along with the significant rerouting, the province will put a pedestrian bridge originally planned for the LRT’s Cooksville stop on hold, as well as make changes to the street-scaping along the entire right-of-way.

The project is currently at the request for proposals stage. Metrolinx plans to award the contract and begin construction this year.