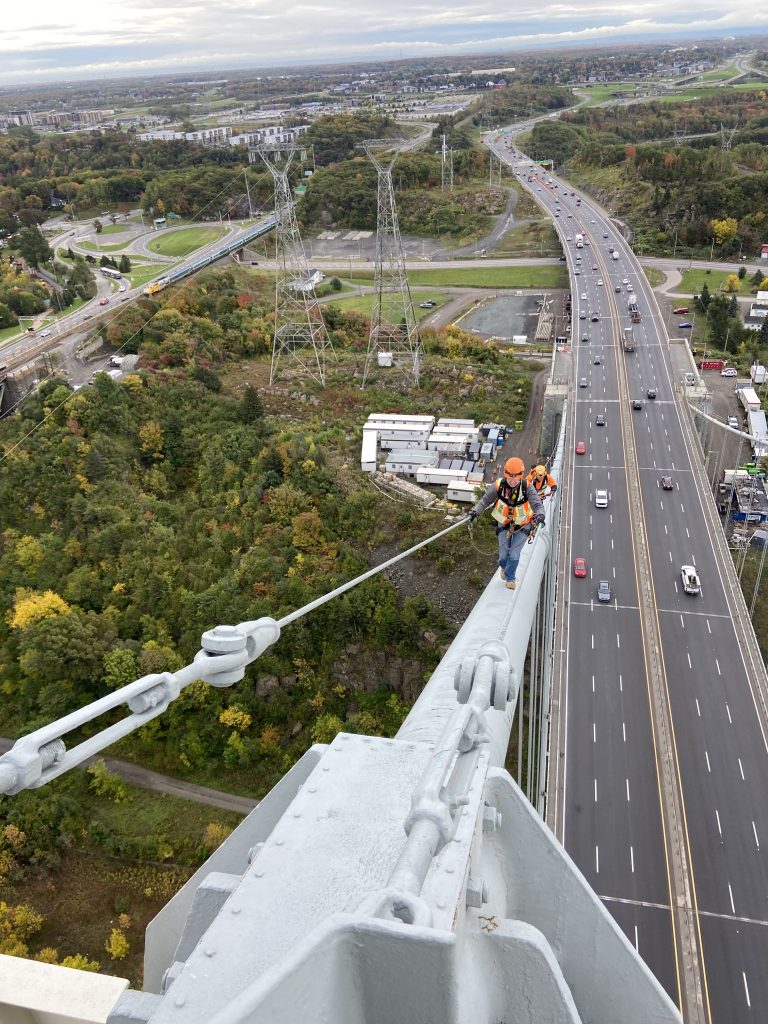 Sorting through hundreds of jobsite photographs, the almost-vertigo-inducing perspective of this shot couldn’t help but rise to the top as our team of judges went through multiple rounds of ranking and culling the stacks of images to finally come up with the overall winner of On-Site’s 2021 Canadian Construction Photo Contest.

This year’s winning photo was submitted by COWI North America Ltd. The Quebec Ministry of Transportation engaged the company to develop a conceptual design for a cable dehumidification system for the main cables of the Pierre-Laporte Bridge in Quebec City as part of a longterm management plan for the structure. The shot, which captures the moment in a way that puts the viewer atop the bridge, is from the company’s work at the site in October.

Opened in 1970, the Pierre-Laporte Bridge is the longest main span suspension bridge in Canada. The bridge is located in an aggressive environment where corrosion caused by the use of de-icing salts has to be managed.

All we can say is that it must take a lot of guts to trek up the main cable of a suspension bridge to conduct an inspection, especially while traffic is flowing far below.

Thankfully, Eileen McEwen was there with a camera to capture the moment.

In recognition of COWI North America taking top honours in this year’s contest, On-Site has made a donation in the company’s name to Dress for Success Halifax, a non-profit organization that prepares women for employment through coaching, guidance and providing work-appropriate attire.

As with previous years, this was not an easy contest to judge. In addition to the winner and finalists presented in these pages, there were at least a dozen additional images that could have been included as finalists as well. On behalf of the team here at On-Site, we’d like to thank you for sharing these moments on your jobsites. We truly enjoy seeing your finest work.

And don’t forget to snap photos as 2022 unfolds on your jobsites. The next Canadian Construction Photo Contest will launch in December, and you can’t enter a photo that was not captured, so keep those cameras, drones and smartphones rolling! Happy, and safe, shooting.

With hundreds of photos to choose from, from all parts of the country, this year’s crop of images was very difficult to narrow down to a list of finalists and a single winner. As you can see from the shots in these pages, there’s great work happening on jobsites right across Canada.

Thankfully, cameras were rolling to capture these impressive images. 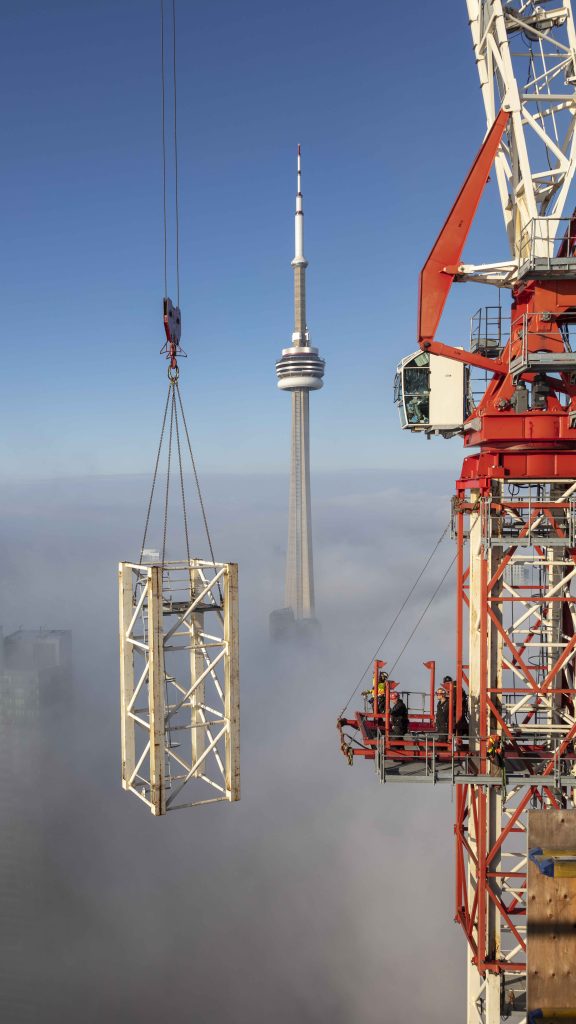 A crane being built at the 81 Bay St. CIBC towers with the iconic CN Tower in the background. The project involves the construction of a 49-storey office tower containing three levels of underground parking, a two-level GO Bus Terminal, and a terrace/walkway over the rail tracks. 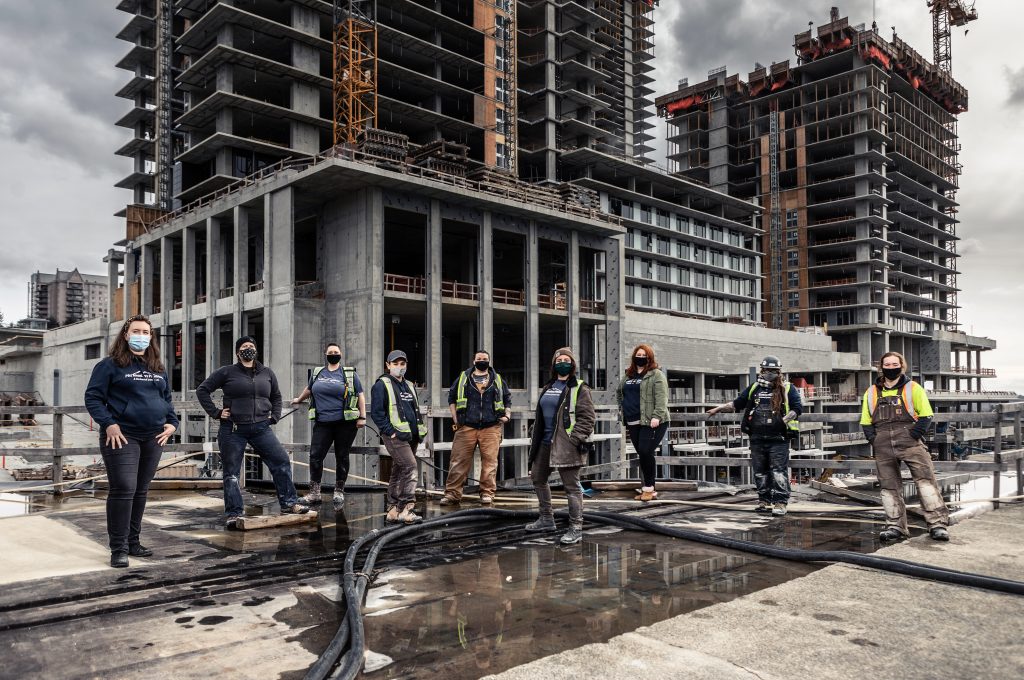 Pitt Meadows had more than 70 plumbers at work on the four residential towers in this project. This photo was taken in March 2021 for International Women’s Day. It highlights the company’s highest concentration of female employees who have ever been working on one project at the same time. The nine women in the photograph filled various roles on the project ranging from site coordinator to apprentice plumber, and Red Seal plumber. One of the women in the photograph, Kym Green, was recently promoted to foreperson. 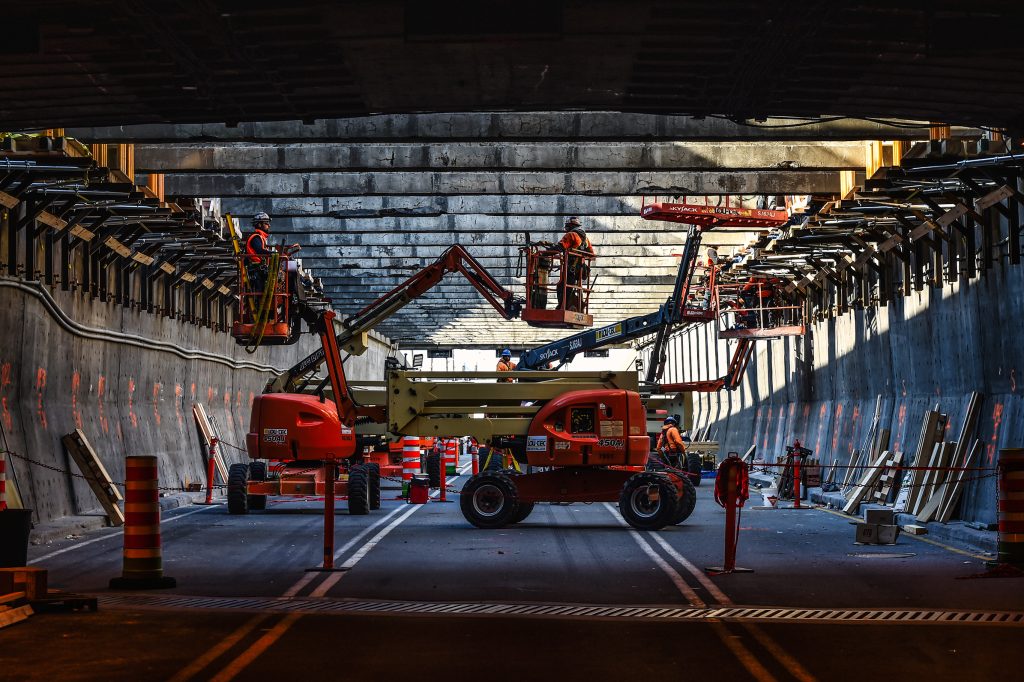 In October, workers carry out the preparatory work for the delicate installation of 28 paralume beams for the rehabilitation project on the two-kilometre-long Louis-Hippolyte-Lafontaine Tunnel. The tunnel is the most used crossing between the South Shore and Montreal for the transportation of goods. 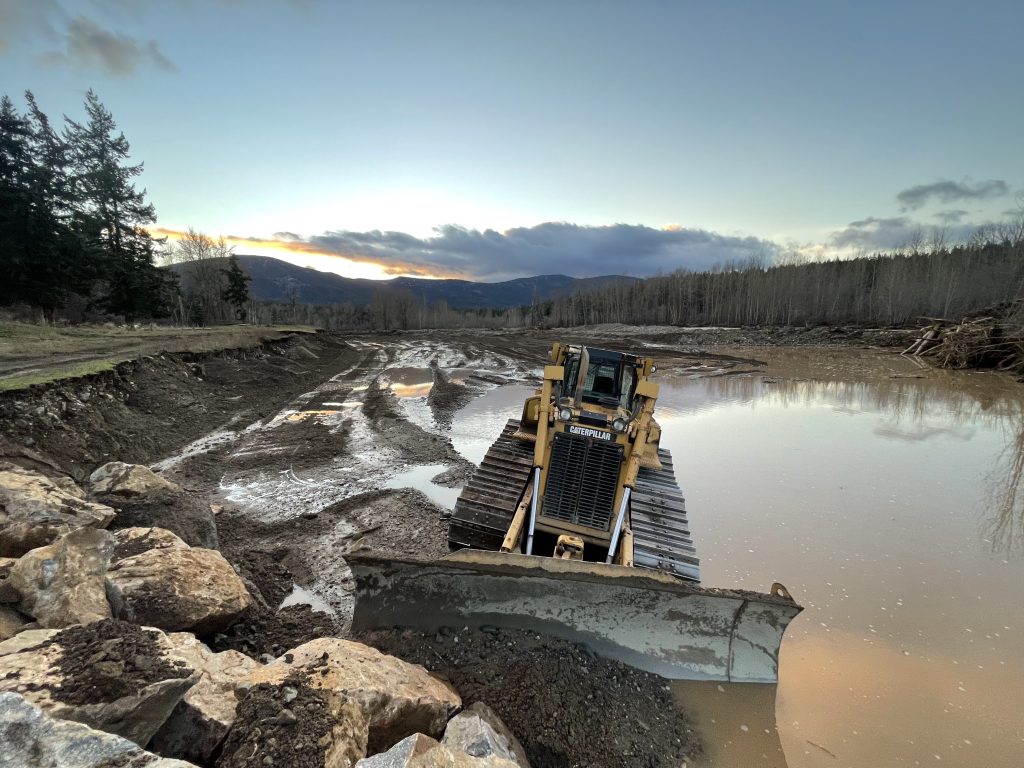 Helping reconnect communities during the B.C. flooding in November, the Merrit Division of Emcon Services had several pieces of equipment mobilized to help rebuild access to a bridge on Patchett Road. 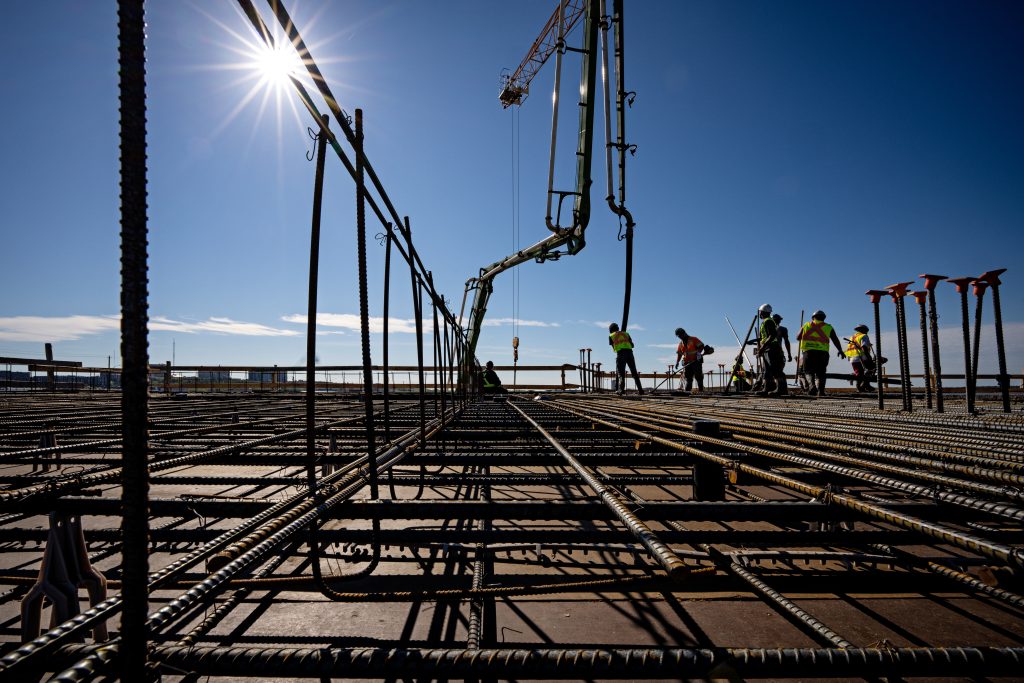 A sunny, summer day building the Bayers Lake Community Outpatient Centre. This photo, taken this past July, shows some of the construction activity on a new outpatient facility on a 15-acre site in the Bayers Lake Business Park in Halifax. Once complete, the centre is expected to provide 28,000 clinic visits and 30,000 x-ray and blood collection visits per year. 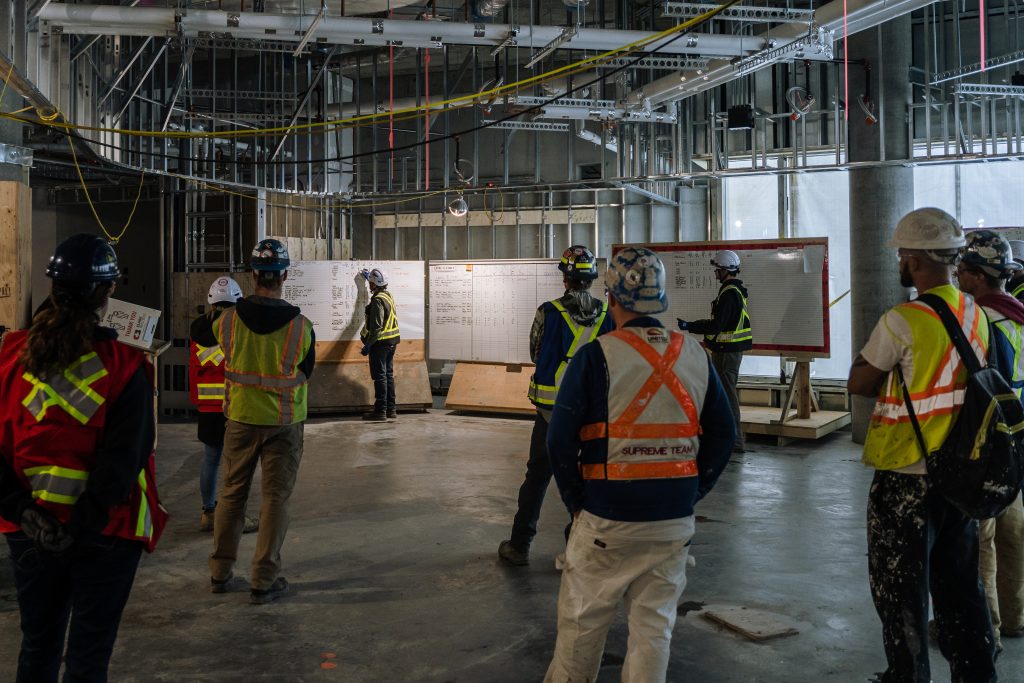 A meeting of the times. In August, Chris Ruiter caught a socially distanced early morning meeting with the trades ahead of a day of work on the Norwood Redevelopment Project in Edmonton. The $364 million, 40,000 m2 redevelopment project will help with the growing need for continuing care capacity in the region. 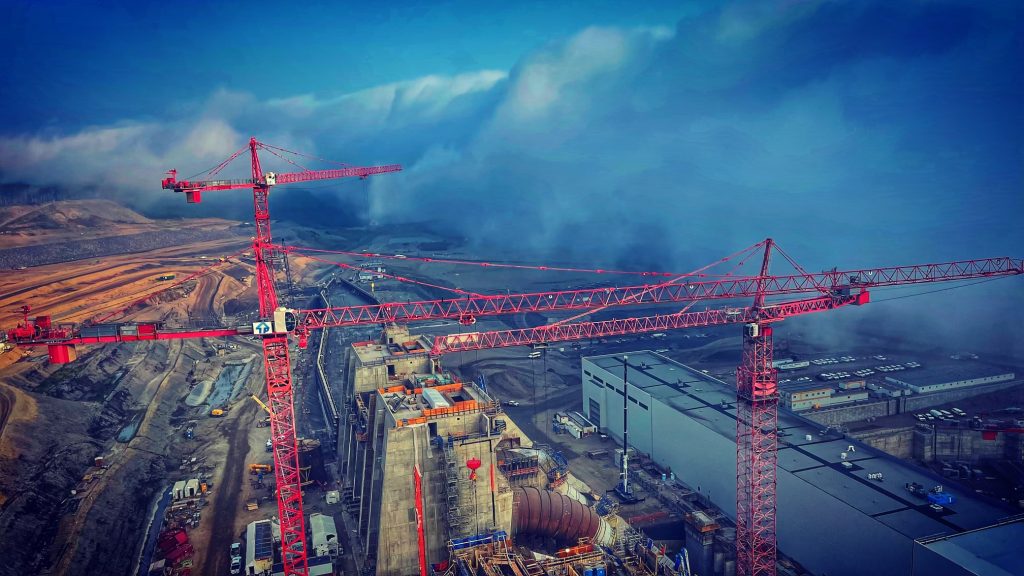 On a cool morning in August, Tower Crane 7 operator Jonathan Bloomer caught the fog bank in the Peace River Valley as the sun rose behind him. Morning fog is a common occurrence at the Site C Dam site as the cool, moist air coming off the river is trapped underneath a stable, warmer air mass in a temperature inversion. 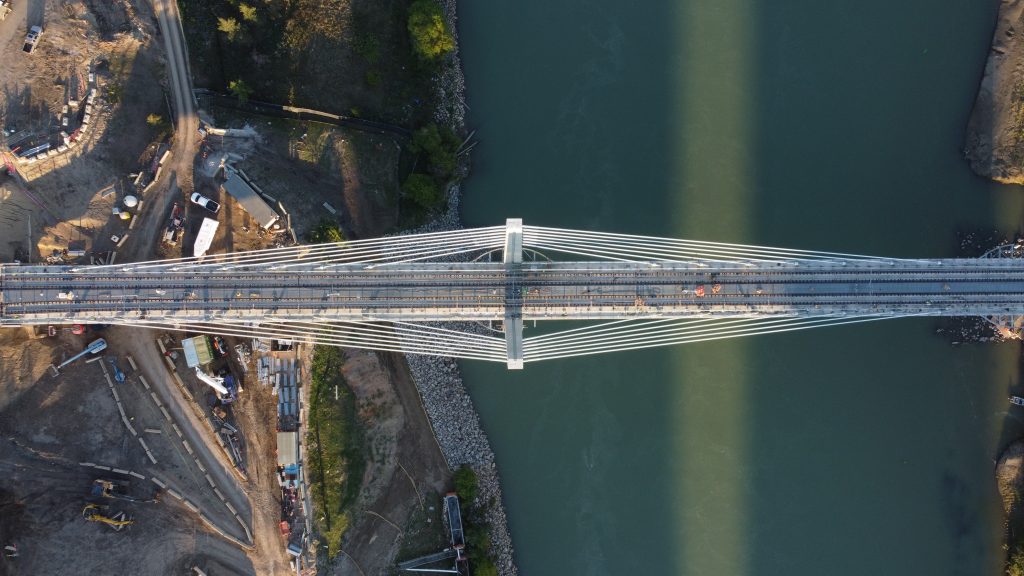 A bird’s eye view of the Edmonton LRT. Construction of Stage 1 of the Valley Line Light Rail Transit (LRT) will connect Mill Woods to downtown Edmonton with about 13.1 km of light rail transit. This stage includes 11 stops, an elevated station incorporating a transit centre, and a transfer point to existing LRT routes. 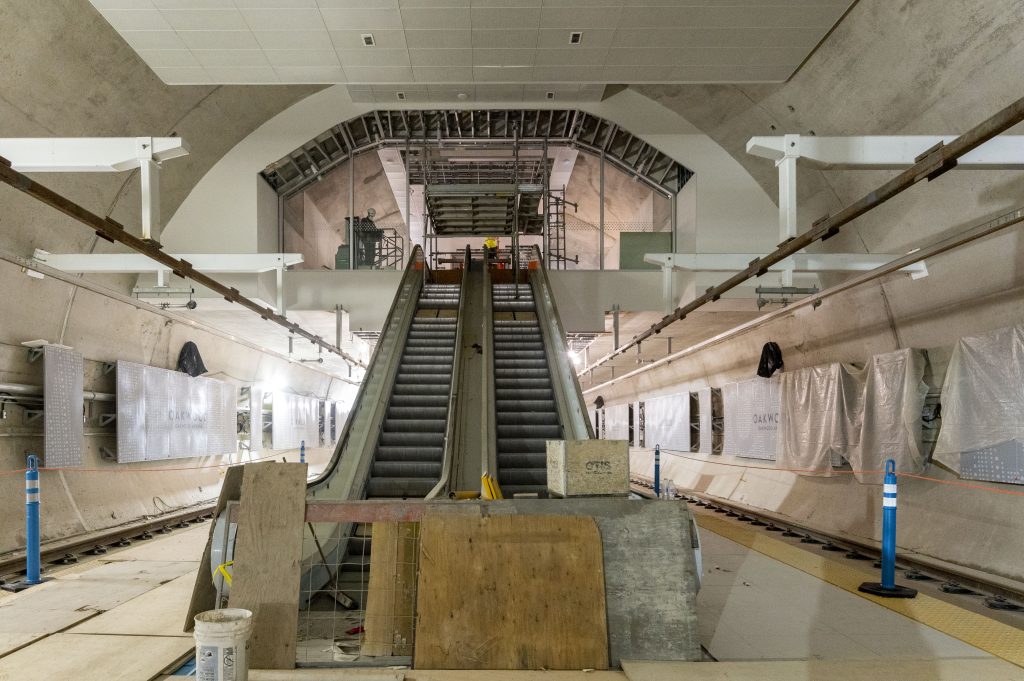 Oakwood Station, part of the Metrolinx Eglinton Crosstown Light Rail Transit (LRT) project, undergoes some finishing work. The station has a unique cylindrical shape that’s a remnant of the mining excavation method used to dig out the cavern sideways under Eglinton Avenue. 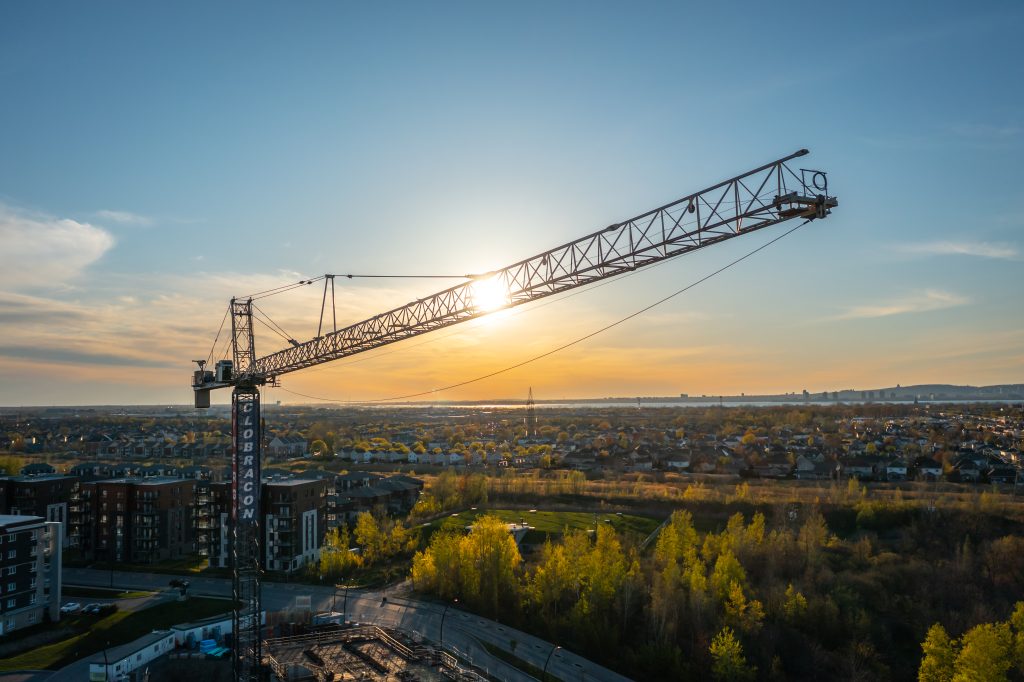 A tower crane at sunset. A drone was used to capture Clobracon’s crane on a nine-storey multi-residential build in La Prairie, Que, just outside of Montreal. The St. Lawrence River and Mount Royal can be seen in the background. 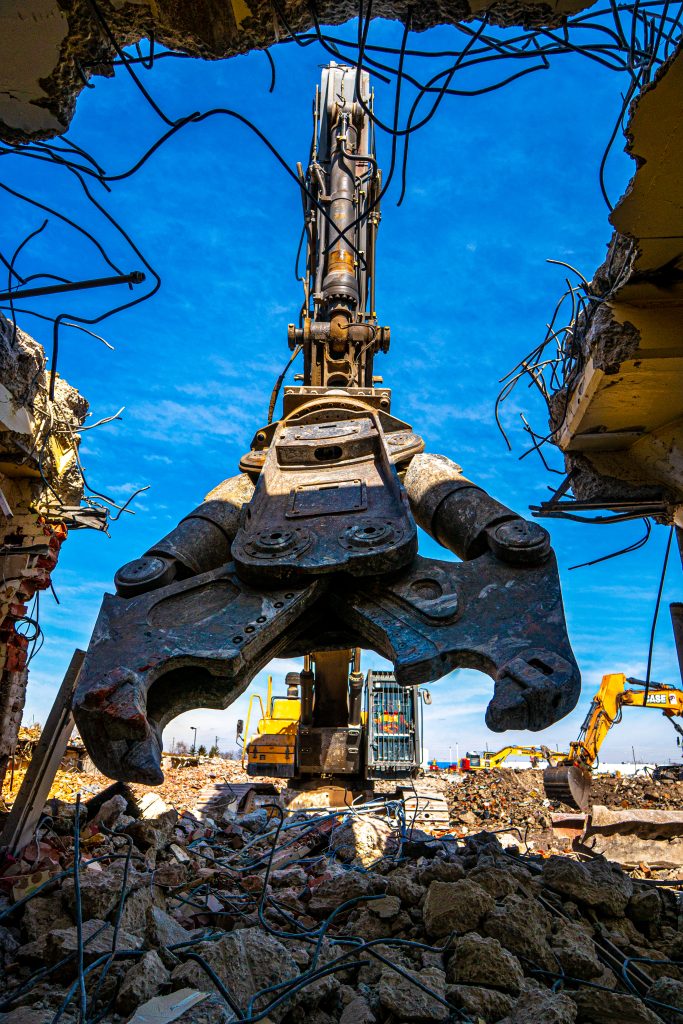 A processor attachment breaks up large pieces of concrete at the demolition of the Campbells Soup Plant in Etobicoke, Ont. A rapid demolition project, PDI took down 12 buildings and a 200-foot-tall chimney within a 10-week period.