In the spotlight: The finalists in On-Site’s 2019 Canadian Construction Photo Contest

The On-Site team had a deep field of great images to look through this year and a long list of remarkable projects to assess — from complex rehabilitation work to unique high-rise jobs. Narrowing down the contributions to a half dozen shots was no simple task, but the six finalists here show off the diversity of what Canadian construction has to offer.

And there’s a lot more where that came from. Make sure you also take a look at this year’s winner and our honourable mentions.

The photos are in high resolution, so simply click to enlarge them

Taken in the early hours of the morning at Pierre Elliott Trudeau International Airport, Montreal-based photographer, Bruno Petrozza snapped this ethereal shot on behalf of EBC Inc. It depicts a complex concrete pour with workers, pump trucks and cranes hard at work while planes lay in wait on the tarmac. The concrete pour was one step in the construction of four-storey parking structure project at the airport that will add approximately 3,000 spots. EBC said more than 80,000 cubic metres of concrete were poured for the new structure, often in difficult winter conditions. 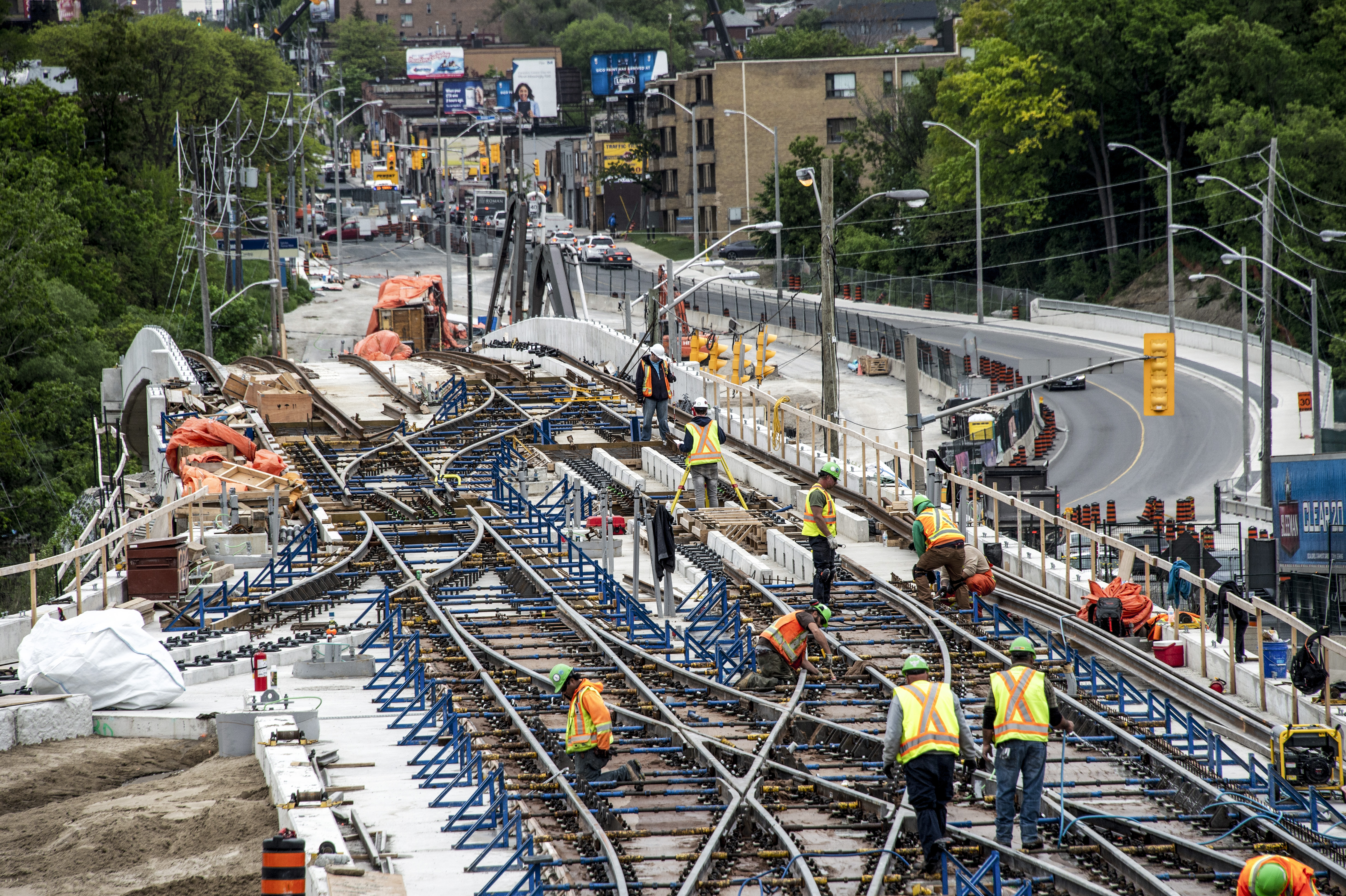 A crew of Crosslinx Transit Solutions workers, on behalf of Metrolinx, lay track for the new Eglinton Crosstown Light Rail Transit project along Eglinton Avenue in downtown Toronto. Slated for completion in 2022, the project is a provincial government investment to expand city’s transit network. Once complete, the new light rail line will have 25 stations and run 19 kilometres. Construction on an elevated guideway that runs over Black Creek Drive in the city’s west end is seen here. 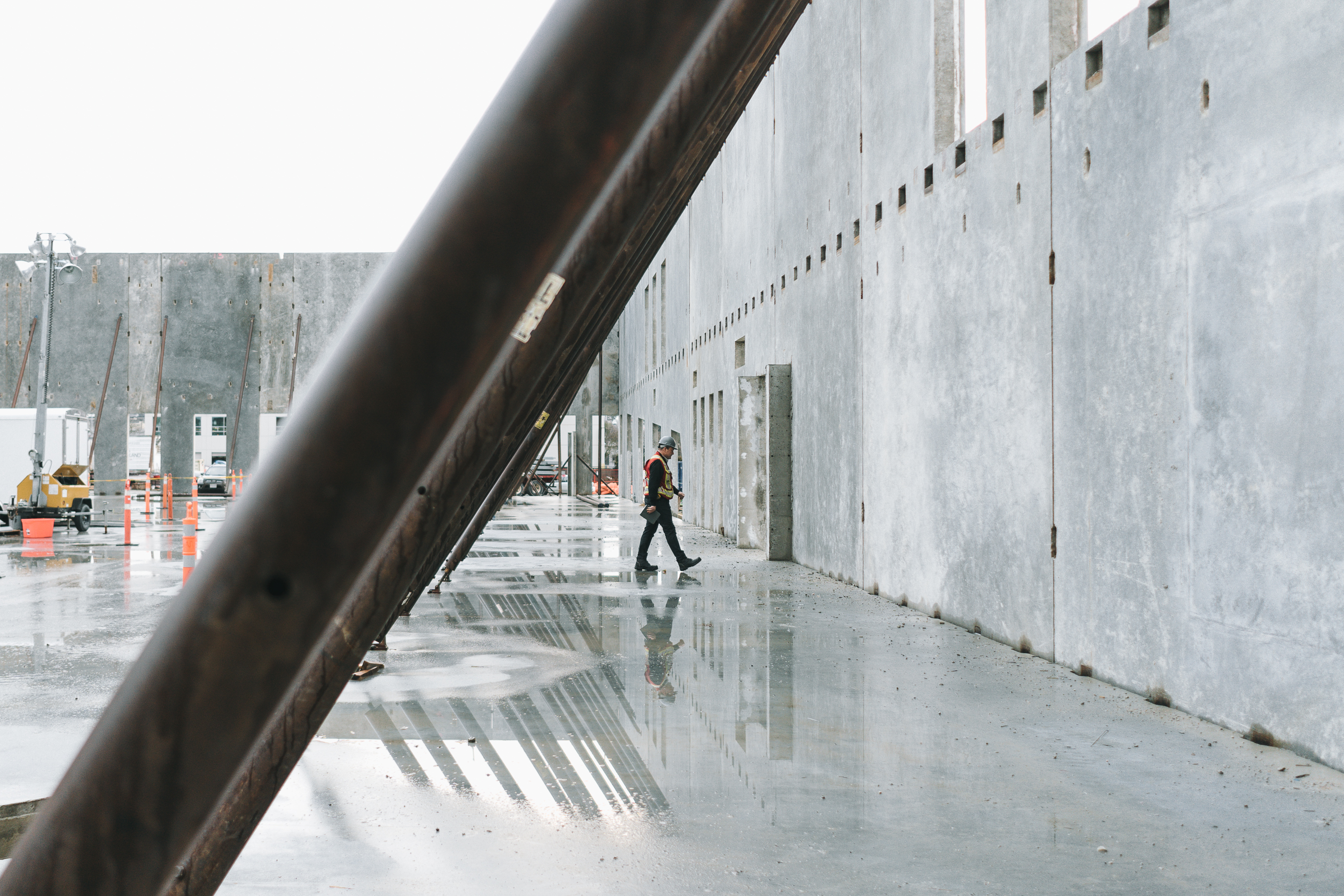 A superintendent walking a job site in Vancouver. Taken on behalf of SiteMax, the image depicts a tilt-up concrete project with support beams holding up newly-raised concrete walls. SiteMax project management software was used on the project to log data points such as safety certificates, daily reports and photos. 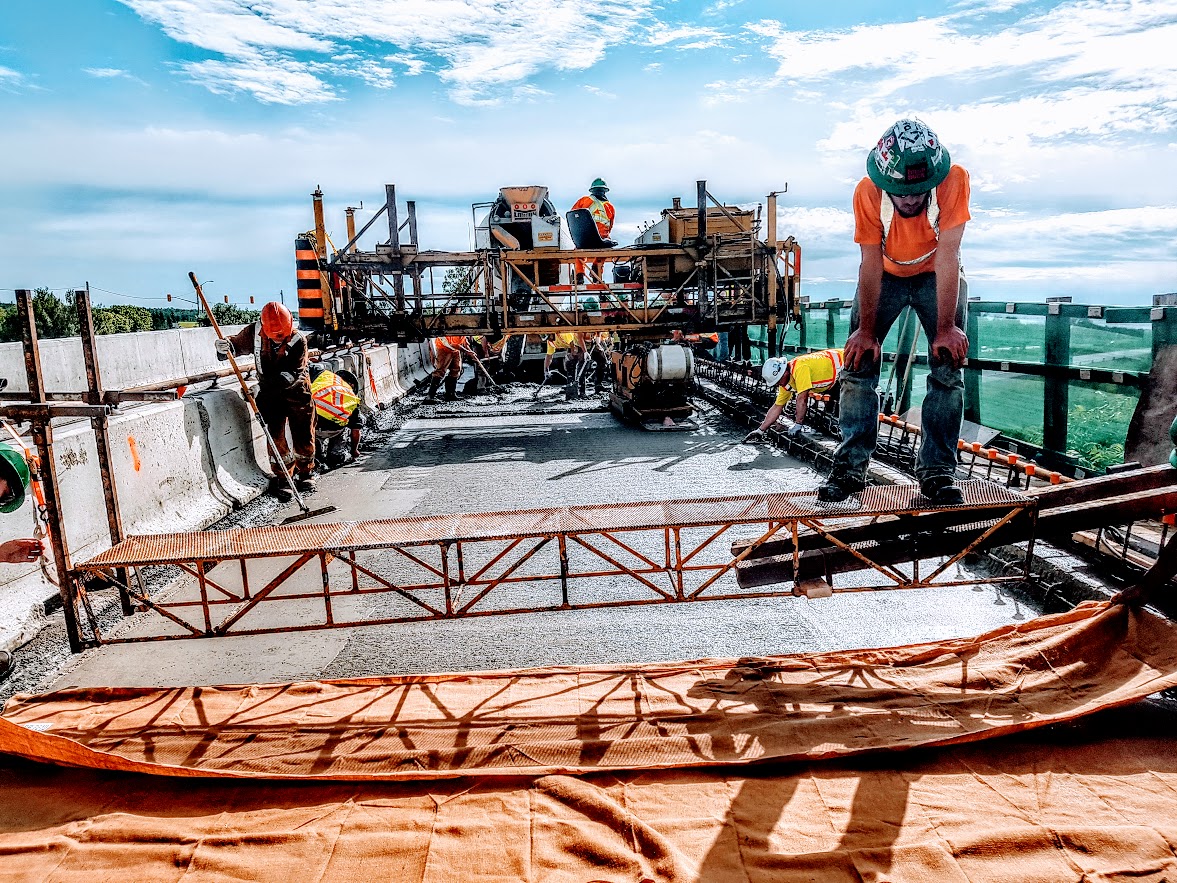 Workers taking part in a bridge rehabilitation project at Devine Road and Highway 417 in Ottawa. Louis W. Bray Construction, in collaboration with Ireland Bros Ltd., took on the bridge rehab work. The job included a complete deck rehab requiring a redo of the deck top, rebar, concrete and asphalt. Depicted here are crews from Louis W Bray and Ireland Bros working on the deck overlay. 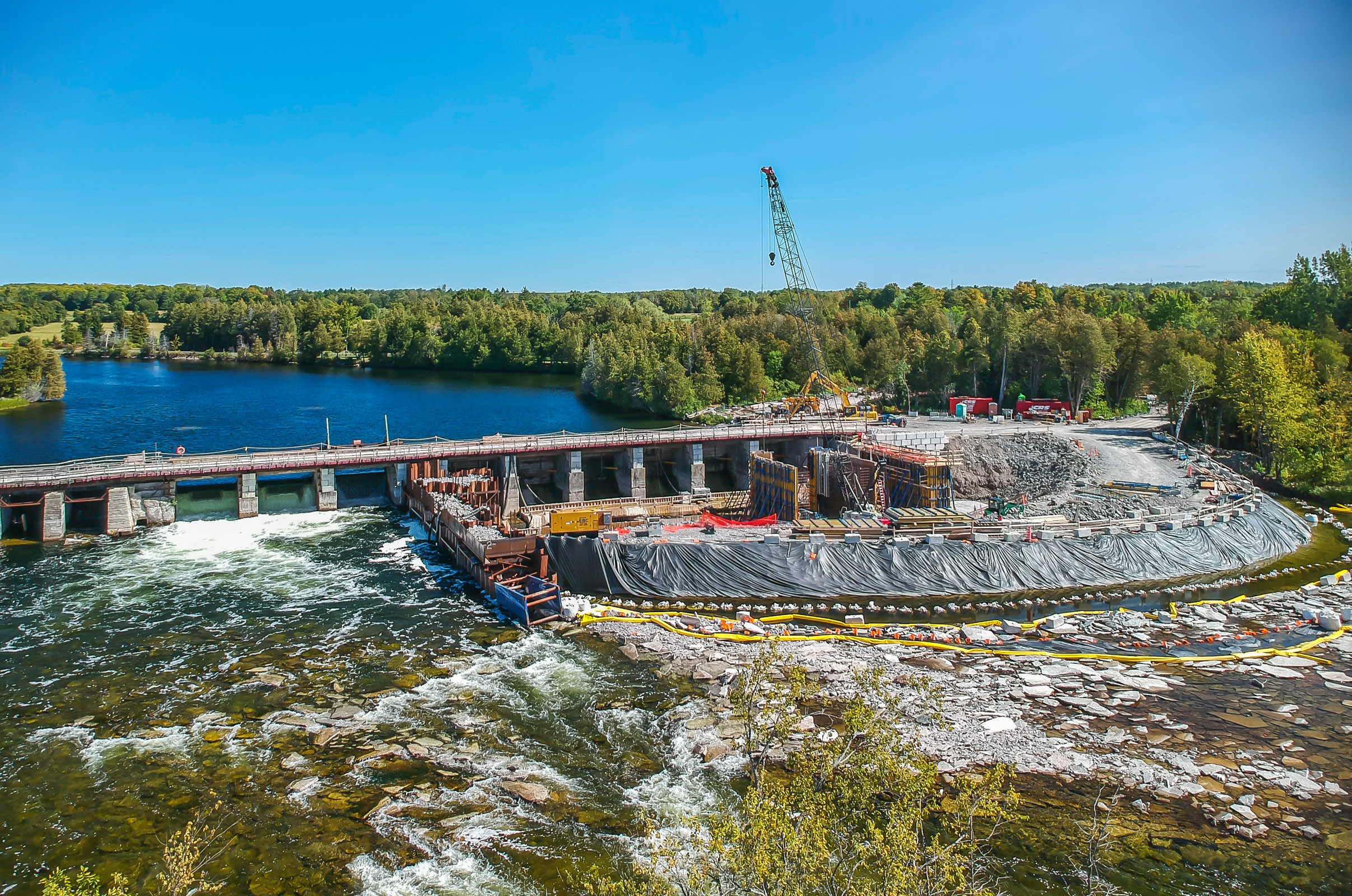 About 12 kilometers north of Peterborough, Ont. on the Trent-Severn Waterway, EBC Inc. is working to rehabilitate the Douro Dam. A number of locks on the canal have reached the end of their life, prompting Parks Canada to initiate repairs. EBC is responsible for replacing the entire existing dam structure, including the deck, piers, abutments, stop logs, spillways, upstream and downstream wing walls, and east and west approach slabs. Progress on the project early last fall is seen here. 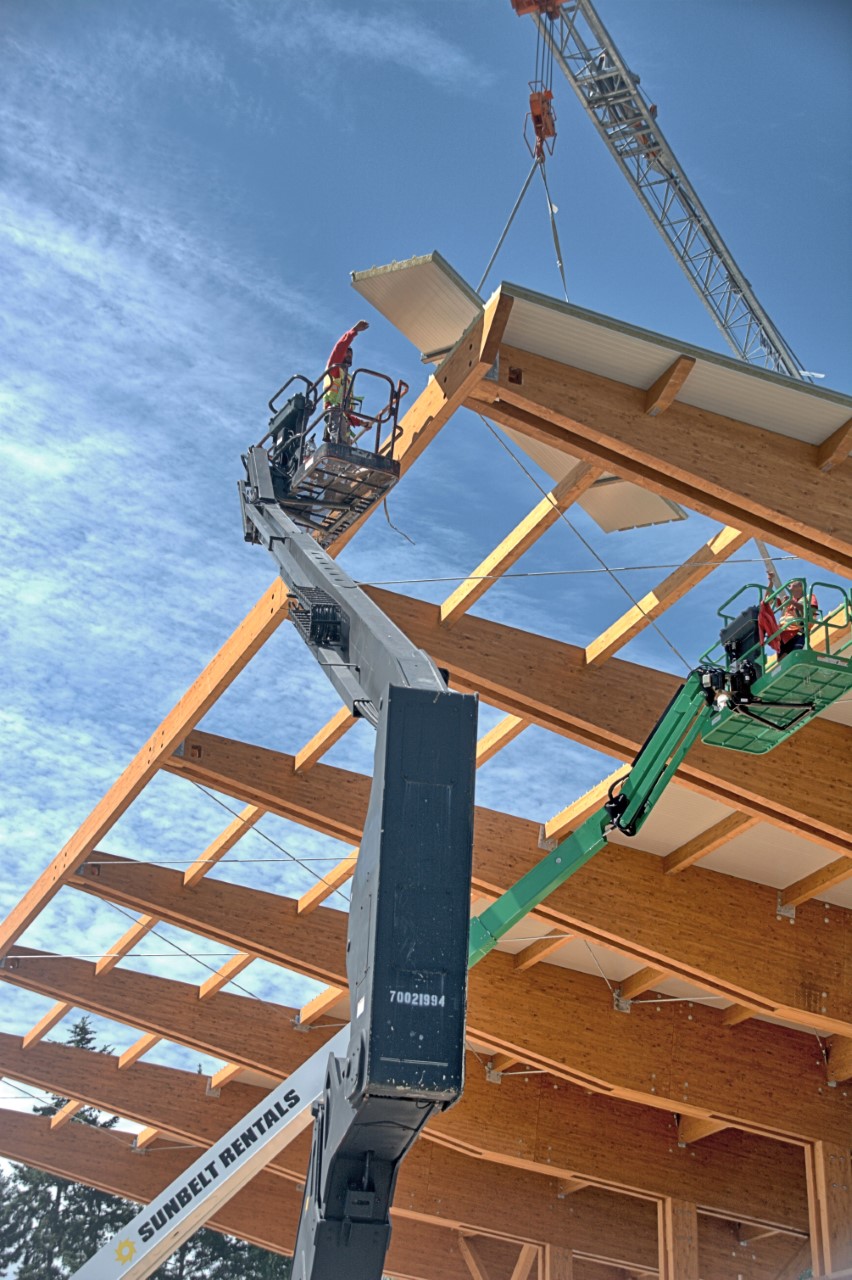 Westhills Stadium in Greater Victoria, B.C. has recently undergone $8.8 million in upgrades. Three new roofed grandstands were prefabricated by Bear Stadiums and its supplier, Rubner Holzbau, a timber construction expert. Components, including the massive glued and laminated spruce beams seen here, were shipped to British Columbia, where they were assembled over the last four months of 2019. The new Westhills Stadium is home to the Pacific FC soccer club.

Finally, make sure to dig into the past with our 2018 winner, the five finalists and our honourable mentions.