In the wake of the flood 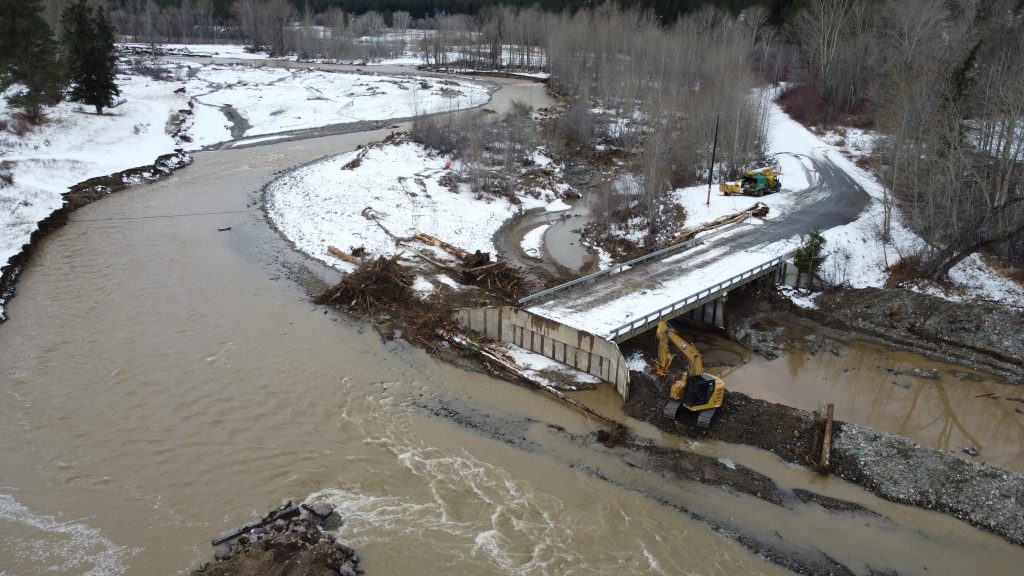 COVID-19 may have been Canada’s longest running news story in 2021, but severe weather at the end of the year left more than a few marks that will be felt for some time to come.

Even as British Columbia recovers from November’s record-setting rainfalls and embarks on what stands to be one of the most costly transportation infrastructure rebuilds ever seen in Canada, meteorologists warn that several climate change models suggest more of the same in the years ahead.

While the West Coast is known for its temperate, damp climate, four consecutive days of intense downpours exacerbated an already strong rainy season that had left the region drenched. The Fraser Valley was hit particularly hard, impacting routes west to Vancouver and east toward Alberta. In some cases, access was completely cut off. 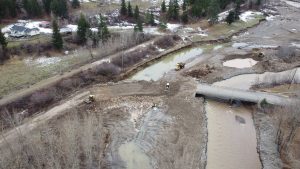 Highways connecting the Lower Mainland with the rest of the province were also severely disrupted, as were major rail corri- dors, energy pipelines and hydro services.

With the Fraser Valley home to much of the province’s agricultural production, and coastal ports unable to ship inland, already strained essential services and supply chains faced further havoc. Multiple closures, including to the Trans-Canada and Coquihalla Highways, forced the Canada Border Services Agency to modify pandemic restrictions so Washington State could serve as a go-between to connect Vancouver with the rest of Canada.

Against this backdrop, RKM Crane Services found itself close to the epicentre.

Located in Langley, B.C., it was on high enough ground that things seemed normal enough, even while the floodwaters were rising with astonishing speed in adjacent communities.

“We saw little or no flooding whatsoever, but a few minutes away, in Chilliwack, they were slowly shutting down highways,” RKM general manager Matthew Blackwell told On-Site. “It wasn’t just damage to the side of the road, it literally wiped out entire roads and bridges. The water actually went around the abutments of some large bridges, taking out the road on either side and leaving the bridges standing in the middle of nowhere.”

RKM has nearly 30 all-terrain cranes and boom trucks well suited to hoisting bridge girders and all manner of heavy components and debris.

The only problem was that Langley was largely an island unto itself, so the company’s equipment had to stay put until a degree of access was restored.

“We were handcuffed and landlocked because you obviously needed to get to a bridge in order to repair it,” Blackwell explained.

Ian Pilkington, chief engineer with B.C.’s Ministry of Transportation and Infrastructure, said equipment suppliers and contractors from neighbouring locales literally repaired their way into the heart of the Coquihalla and Fraser Canyon. 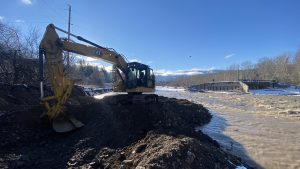 At least one contractor working on the TransMountain pipeline already had heavy machines in some of the hardest hit areas, so they were able to switch gears to help restore highways and bridges.

When the floodwaters receded and very basic access was restored, RKM Crane Services was able to partake in a province-led effort to return some semblance of normal to its transportation network.

“Road building isn’t really where our market is, but helping to put in temporary bridges, girders, abutments and new decks is a big part of what we do,” Blackwell said.

FUTURE PLANNING A MUST

With last summer’s fires having decimated entire tracts of forest, which normally act as a buffer from melting mountain snowpacks, forecasters warn flooding could recur again this spring.

While the work underway to fully restore access is, in itself, substantial, Blackwell recognizes the severity of the fall rains and acknowledges the longer-term challenges that lie ahead given the probability of further intense weather. 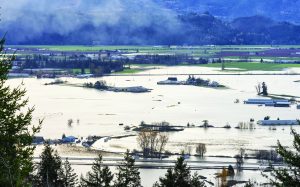 “When you look at a stretch of highway that’s been completely erased, with just a bridge sitting in the middle of a river, it really illuminates the severity of what we’ve gone through and how vulnerable we are,” Blackwell said, adding that it’s obvious to him that existing flood control measures need upgrading to meet needs that aren’t so far into the future.

“We need a really long look at the infrastructure: what bridges are going to be able to withstand as far as water; what needs to be done to improve the durability of highways; and the impact forest fires have on the landscape.” Blackwell isn’t alone in anticipating what lies ahead. In December, the School of Engineering at the University of British Columbia convened a panel to discuss the flooding’s impacts on critical infrastructure and the need to effectively manage future challenges.

“The climate events that took place… and the resulting catastrophic failure of civil infrastructure and the loss of lives, homes and livelihoods, raise a series of questions that need to be answered,” said James Olson, professor of mechanical engineering and dean of applied science at UBC, in his introductory remarks. “It raises questions about climate change and the need to adapt our infrastructure for an uncertain future.”

“The patterns we identify help us develop predictive models that can be used for site specific risk assessment and mitigation design,” McDougall explained. “The information can then be used in the design of mitigation, which can take forms ranging from avoidance to structural protection.” Mitigation efforts aren’t new to the region. Structures were installed along the Sea to Sky Corridor in B.C. after debris flows caused extensive damage in the 1980s. However, McDougall was quick to note limitations.

“These types of structures are used around the world, but they tend to be expensive, so it’s not practical to build them everywhere.” He did say, however, that risk assessments based on strong data can help inform decision making, and new and forthcoming cost-benefit analysis and decision-making tools also stand to help.

One notable failure in November was in the dike system used to protect low-lying areas from flooding. Jonathan Fannin, a professor of geotechnical engineering at UBC, described some of the processes that can cause failure in dikes, such as what led to the catastrophic flooding at the Sumas Prairie landform in the Fraser Lowlands.

“There’s a combination of rehabilitation, reconstruction and a lot of assessment ongoing as we speak,” Fannin said, adding that France, Germany and the United Kingdom have also recently experienced dike failures. He explained that flooding may occur due to overflowing of a dike, or from flow through a local breach where a dike is eroded.

“Some of the confidence in decision making moving forward is going to be informed by work that is done in other jurisdictions so that we’re not taking and defending decisions solely based on our experience in British Columbia,” Fannin said. “The erosion processes that can lead to a breach are complex and involve long-term deterioration that programs of maintenance and inspection will be seeking to catch.” The B.C. transportation and infrastructure ministry’s Ian Pilkington told On-Site he expects rebuilding will take a few years.

He said his ministry has been gearing up for some time to adapt its climate change standards. The ministry is also participating with Engineers Canada and Natural Resources Canada in an international Public Infrastructure Engineering Vulnerability Committee (PIEVC) that produces risk assessments and analyses, and working through forums such as the Pacific Climate Impacts Consortium at the University of Victoria to develop anticipatory data.

“We’ve learned we can no longer rely on historical data,” Pilkington said. “We have to look at ‘future’ data our designers can use to help account for climate change.” 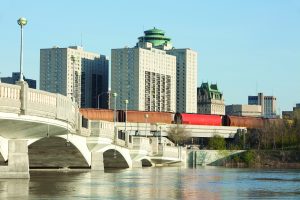 While the flooding in British Columbia captured international attention, Atlantic Canada also experienced infrastructure damage from heavy rains this past fall. And the Red River is a perennial challenge in Manitoba. Manitoba Infrastructure owns and maintains community ring dikes within much of the Red River Valley to protect against at least 100-year water levels, and pumping systems enable additional land drainage.

Manitoba has also undertaken a $16 million project to pave an alternate route to a section of Provincial Trunk Highway 75 that has been significantly prone to closures, along with the raising of a particularly vulnerable stretch to match flooding levels sustained in 2009.

“Highway 75 is a major north–south corridor that supports significant international trade,” then-Infrastructure Minister Ron Schuler said when announcing the project in 2020. “Investing in our highways supports economic growth and will have a positive impact on Manitoba’s economy for years to come.”