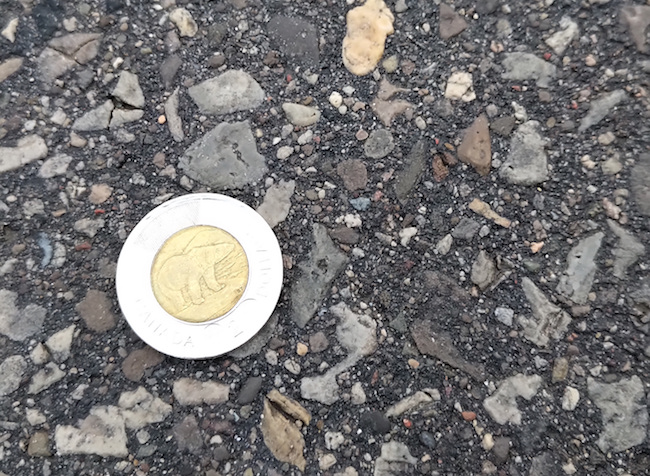 A RAP road surface on Wellington Road 41, with a toonie to show scale. PHOTO: Mark Eby/County of Brant

Motorists who experience a sense of deja-vu while driving along North America’s expansive roadways might not necessarily be daydreaming behind the wheel. Over the last few years, road builders across Canada and the U.S. have increasingly embraced RAP, or reclaimed asphalt pavement, which is scraped up, processed and recycled into a fresh new mix. Asphalt has been recycled in many jurisdictions for decades and the process has been gaining traction due to recognized environmental benefits.

For as long as roads have been built, raw materials have come almost exclusively from gravel pits and quarries. Now, with climate change on the radar as a potentially life-altering disruptor, a society-wide rethink has been underway on multiple fronts.

Municipalities tight on land fill space are desperate to reduce volumes of waste aggregate. Jurisdictions are equally eager to reduce the greenhouse gas emissions that come with trucking virgin materials hundreds of kilometres to construction sites. And the realization that natural resources are nite and extraction damages entire ecosystems are adding momentum.

Two years ago, the Toronto and Area Road Builders Association surveyed 25 Ontario municipalities about their use of recycled asphalt and concrete and found mixed results.

Reasons for relying on virgin materials varied. Some municipalities preferred to work with familiar ingredients. Others worried about impurities such as wood or even metal debris potentially contaminating recycled streams.

However, a rising understanding that reusing aggregate brings economic benefits as well as environmental ones has helped the recycling cause. Mark Eby, director of Infrastructure Services with the County of Brant in southwestern Ontario, says
it’s cheaper to use even a small portion of recycled aggregate in an overall new mix than to use full virgin stock. On the contracting side, reduced disposal cuts tippage fees.

“There’s a cost to load [recycled pavement material], get it back to the plant, and process it, but that cost is less than what it is to mine and purchase new aggregate,” Eby explains.

In 2010, as construction manager for Wellington County, Eby drafted that municipality’s procurement specification for using RAP in new hot mix asphalt, guided by Ontario Provincial Standards Specifications (OPSS), which allowed for up to 10 per cent recycled material in surface layers and 20 per cent in the underlying layers.

The specification was adjusted in 2012 to allow for up to 20 percent in surface layers and 40 percent (follow- ing OPSS) in base asphalts. Eby says two contractors have successfully paved projects with greater than 30 percent in the base.

When Eby moved to Brant in 2018, the county was already using RAP, but in lower percentages than in Wellington. So he’s working to boost Brant’s allowable recycled content.

Jim Musselman, a senior engineer with the National Center for Asphalt Technology at Auburn University in Alabama, says RAP has been used regularly since the late 1970s south of the border, and its use and sophistication are increasing.

In some cases additives are used as rejuvenators to enhance durability. While some are petroleum-based, they’re increasingly derived from natural sources such as tall oils, which are a by-product of the paper industry.

“There are several other bio-based rejuvenators,” Musselman says. “You can make them from vegetable oil, corn or soybeans. There are very sustainable processes to make these rejuvenators.”

The acceptance of RAP also varies among state transportation departments in the U.S. Some don’t permit any recycled content on road surfaces due to concerns about reduced pavement friction.

“Generally as you go deeper in the pavement structure agencies typically allow higher RAP content,” Musselman says, describing consideration to achieve proportions deemed suitable for various layers of the road surface and base as well as ideal mixtures for different volume levels of traffic.

According to a survey conducted by the National Asphalt Pavement Association, road projects in the U.S. averaged 21.1 per cent RAP content in 2018 — the latest year for which data is available — translating into 82.2 million imperial tons used in new pavements. That’s up from 15.6 per cent in 2009, which has saved more than $2.3 billion annually in raw materials and diverts more than 62 million cubic yards of waste from land fills.

While the numbers indicate strong benefits and increased market acceptance of RAP, both Eby and Musselman point to Japan, a global leader with an average 47 per cent RAP content. “It’s an island nation and they have a limited amount of natural resources, so they try to reuse materials as much as they can,” Musselman says. 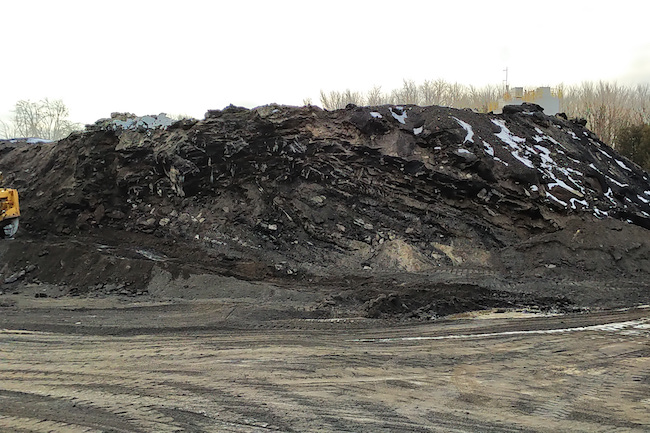 A recent presentation Musselman and Eby delivered at the annual convention of the Ontario Road Builders Associa- tion (ORBA) in early February in Toronto illustrates the challenge of continuing the momentum.

When Eby surveyed the room, asking attendees to raise their hands if they were municipal employees, just a single hand went up.

“The room was all contractors,” he says. “But the good contractors already know they can make a good pavement that’s going to last with RAP in it. It’s the people they’re paving for — the owners — that have to be willing to allow it to occur.”

There was discussion afterwards about the need to get the word out about RAP. But, had more municipal representatives attended, they would have learned about measures jurisdictions of all sizes are taking to enhance the quality and durability of reclaimed pavements.

Poor management of stockpiles is commonly cited as one reason agencies are reluctant to increase allowable RAP content in asphalt mixtures, Musselman acknowledged in his presentation. He recommended best practices such as inventory management, careful stockpiling and regular sampling and testing.

“It’s important to prevent contamination of the stockpiles right from the beginning,” Musselman advised. “And that involves clearly instructing all truck drivers hauling materials to the yard where to dump different types of materials.”

Screening is also a must, with recommendations decidedly technical. “If the maximum aggregate size of the as-received millings is small enough to use in the desired mix designs, there is no need to further process them,” Musselman said. “However, if the maximum particle size is too large for the desired mixes, then a contractor can either fractionate or screen the RAP into coarse and fine stockpiles, or they can crush the millings so that they will pass the desired screen size.”

For his part, Eby told ORBA delegates municipalities and contractors need to work together to build trust and ensure quality materials. Project owners can do quality assurance testing to determine they’re receiving what they’ve specified, while contractor quality control testing can enable prompt adjustments if needed.

The bottom line is nding the right balance and mixture for each segment of a particular project, Musselman said. “It’s a little bit like baking a cake. You’ve got to take care that you use the right ingredients, the right amounts and the right mixing processes to make sure you get the product you want.”