In the crosshairs: From carbon sinks to energy-efficient materials, MTO targets climate change 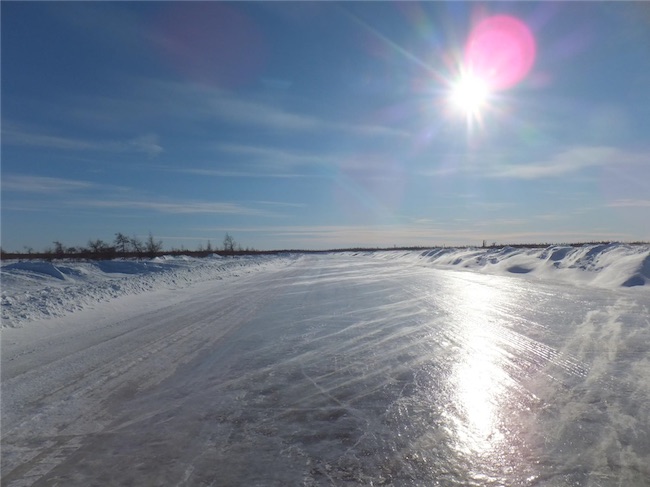 An ice road in Northern Ontario. Winter roads continue to play an important role for remote regions of the province. PHOTO: MTO

With a highway network stretching 17,000 kilometres, 2,850 bridges, 29 airports, 11 ferry services and numerous other assets to manage, the Ontario Ministry of Transportation is on the front lines when it comes to mitigating the effects of climate change.

At the annual convention of the Ontario Road Builders Association (ORBA) in Toronto this February, Mike Pearsall, manager of MTO’s design and contract standards office, outlined impacts on the provincial transportation network and highlighted measures the ministry hopes will keep things running smoothly.

It was clear from the session description, Climate Change: Adapting Infrastructure in Ontario’s North and Beyond, that changes in climate norms are especially evident in Ontario’s far north, with thawing permafrost eroding the stability of roads, buildings and other infrastructure.

However, average temperatures are expected to rise two to three degrees by 2050, and even more in northern Ontario, with floods, ice storms and other extreme weather increasing in frequency and intensity province-wide.

“We have to respond,” Pearsall says, warning about potential new warm-weather diseases, changes in growing seasons and multiple transportation-related consequences.

If northern airports are rendered inaccessible due to prolonged freezing rain or forest fires, fuel and food deliveries and even emergency medical transport could be hampered, Pearsall says.

Pearsall outlined a number of measures MTO is planning and in some cases has implemented as part of Ontario’s climate change mitigation and adaptation strategy.

These include online tools to help predict the intensity and frequency of extreme weather events. MTO’s Road Weather Information System is designed to provide real-time atmospheric and pavement condition data for winter maintenance decisions.
MTO is also converting its network of remote airports to solar and wind power and switching to energy-efficient LED lighting.

Still, significant challenges lie ahead. Electric vehicles require considerably more charging infrastructure, particularly in the sparse north. Pearsall also wonders, “How long is it going to be before we see electric construction equipment on our sites?”

The measures are in keeping with the Ontario government’s 2018 climate change plans, aimed at reducing emissions to 30 per cent below 2005 levels by 2030. They also stick to global accords.

“Through discussions with our counterparts at other transportation agencies across Canada, Ontario is seen as a strong leader in including climate change aspects in our highway activities, everything from procurement through to construction and operation and maintenance,” Pearsall says.