A ‘small giant’ in the Fraser Valley 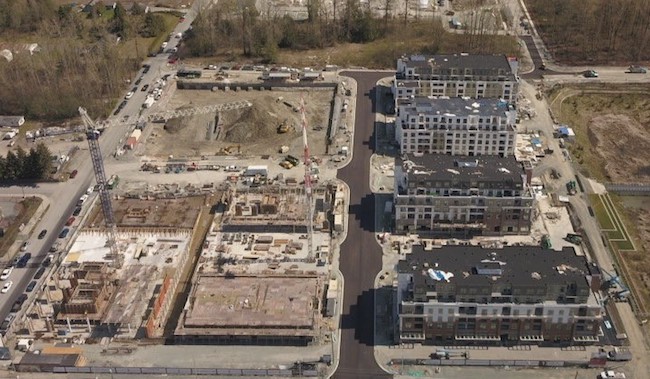 An aerial view of construction on the Latimer Heights projects in Langley, B.C. PHOTO: Caliber Projects

Its name currently stamped on construction hoarding on two of the busiest corners in Langley, B.C., Caliber Projects Ltd. has grown over the past dozen years from a two-employee builder of single-family homes, to a “small giant” overseeing a series of increasingly complex projects in the Fraser Valley.

The fast-growing builder earned revenues of roughly $77.7 million in 2020, with work on two high-profile projects — Latimer Heights and the Willoughby Town Centre — accounting for no small portion of its bookings. With a staff of just 45, the company also spring-boarded to the peak of On-Site’s annual Top Five Under 50 for the year.

Ian Baird, Caliber’s director of construction, credits the company’s momentum, and its ability to take on such a large amount of work with such a small team, to its focus on relationships and the company’s strong sense of community. With no intention of being the biggest shop in town, Caliber has built up its team through careful mentoring.

“That’s our raison d’être,” Baird says. “Building people is literally why we get up in the morning.”

Allowing employees in their 20s or 30s to shoulder more and more responsibility, both on job sites and in the office, is a boon for retention and also lets the company take on more projects without adding to its headcount. Morning huddles on-site with superintendents walking teams through the daily schedule, project managers touching on budgets, and value sharing to keep all workers dialled in and appreciative of one another, add to the team’s cohesion.

“Our team is so tight that there’s nothing they won’t do to achieve success,” Baird says. 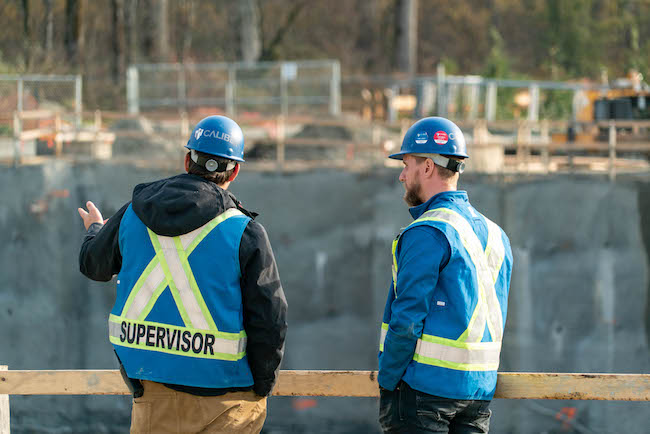 Jerry Pol​, business development manager at Caliber, says the focus on people has been a core part of the company since day one. The familial atmosphere, fostered by Caliber’s founder and CEO Justin Bontkes, helps keep values aligned and the team working toward common goals, Pol says.

“We’re all high performers. We don’t believe in laziness. We’re always crushing it,” he adds, a nod to the company’s mantra — own it, crush it, love it. Though it’s not a written principle of the business, Pol says faith also underpins the company’s code of ethics.

Between the drive to do more with less, and initiatives such as “full-throttle” Fridays, Caliber is known for its fast pace and quality. Crew members own their mistakes and aren’t satisfied with second-rate work, Pol says.

They’re also rewarded for it. Caliber implemented an employee profit sharing program last fall. Modelled from The Great Game of Business, it gives all staff visibility into how the company operates and earns money, as well as the ability to take an ownership mindset. The profit sharing initiative is a way to incentivize running slim as well.

As with all general contractors, relationships with clients and subtrades are another focus for Caliber.

Baird says cold-calling and knocking on doors aren’t necessary as the company has established its track record. Most of the company’s recent business has come from referrals or bolt-on contracts from existing clients, he says — a clear endorsement of Caliber’s ability to deliver. The company’s initial contract for two parcels of Vesta Properties’ Latimer Heights project, for instance, came from a referral, despite Caliber not having tackled a “monstrous” multi-phased project like it before.

A rendering of the completed Latimer Heights project, for which Caliber is working on several concurrent stages. PHOTO: Caliber Projects

When it comes to subcontractors, Caliber views its trade partners as its “life-line.”

The internal sense of community also extends to Caliber’s subtrades, Pol adds, but the company’s high set of standards applies as well.

“We are some of the softest construction guys you’ll ever meet,” Pol says. “But we also hold people to a higher standard than they may be used to. We care, and we also demand excellence.”

Caliber anticipates strong growth to continue in the years ahead. It’s currently working through several concurrent stages of the 74-acre Latimer Heights project, for which it’s building condos, mixed-use commercial and concrete office towers. It started excavation for the first portion of the job in 2019 and expects work to wrap up on the mixed-use series of projects by spring 2024.

A host of other opportunities await. The company has a committed pipeline worth approximately $350 million it expects to work through over the next three years. Meanwhile, it plans to stay relatively small. Pol acknowledges that while its headcount may creep a bit over 50, Caliber intends to bind itself to its “small giant” goal, and building in its own Fraser Valley backyard.