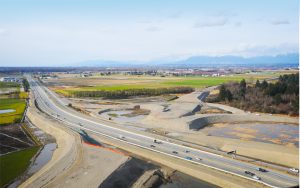 The South Fraser Perimeter Road project is a public-private partnership between the Fraser Transportation Group consortium and the Province of British Columbia. The road, also known as the mainland portion of Highway 17, is a 40km four-lane expressway linking Highway 17 in Delta, along the south side of the Fraser River, to Highway 15 in Surrey and to the Golden Ears Bridge.

“The acquisition of projects such as the South Fraser Perimeter Road is consistent with our strategy of investing in high-quality, long duration infrastructure assets with strong, experienced partners and creditworthy counterparties,” said Matt O’Brien, president of CC&L Infrastructure. “We would like to thank Régime de rentes du Mouvement Desjardins, and our equity and operating partner, ACS. We look forward to working with these partners and the Province of BC in the successful operation and maintenance of this project for years to come.”

“Régime de rentes du Mouvement Desjardins is proud to acquire the South Fraser Perimeter Road project. This asset has characteristics that are aligned with the investment objectives of our infrastructure portfolio which in turn, will contribute to provide long-term stable cash flows to our plan participants for many years to come. We are also pleased to expand our long-term relationship established over the years with CC&L Infrastructure and to participate in this investment with an experienced infrastructure partner such as ACS,” added Frederic Angers, Head of Infrastructure at Desjardins.”

The South Fraser Perimeter Road project was completed in December 2013 after a 4-year construction period at a capital cost of $658 million. The project has a 20-year concession agreement in place with the Province of BC of which approximately 18 years remain.