First piles installed in Fraser River, but $1.4B Pattullo Bridge delayed into 2024 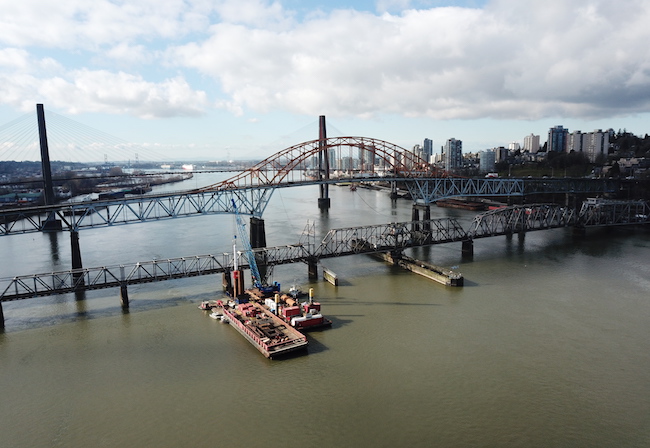 Preliminary work in the Fraser River. Crews will shift their focus to bridge foundations on land over the next several months. PHOTO: Acciona

Early foundation works on the new Pattullo Bridge have started in-river and on both banks of the Fraser in New Westminster and Surrey, B.C.

Roughly 14 months after the major Vancouver area bridge contract was awarded, however, the province’s Ministry of Transportation and Infrastructure says challenges tied to COVID-19 and unanticipated project complexities will push the completion date for the replacement span back into 2024, from late 2023. The province pointed to drawn out investigative work and a slow permitting processes for the delay. It did not disclose a specific date in 2024, though it noted the project’s $1.377 billion budget remains intact.

“The project team is reviewing options to mitigate the delay and have the bridge open as early as possible,” the province said in a release April 1.

The new Pattullo Bridge will replace a more than 80-year-old structure of the same name. It will have a cable-stayed design, with a main span of 330 meters over the Fraser River. While it will be built with four lanes, the design will allow for it to be expanded to six lanes at a later date.

To date, the Fraser Crossing Partners — the Acciona and Aecon Group Inc. consortium responsible for the Pattullo project — said it has carried out geotechnical studies, a test pile and awarded major project contracts. Demolition, archaeological investigations as well as structural and hydraulic design are currently underway, the team added.

Preliminary in-river work on the bridge’s sole tower began this February. To stay in line with Fisheries and Oceans Canada regulations, and to protect fish, that work has been paused for the spring and is expected to resume later this summer. Meanwhile, bridge foundations on both banks of the river are scheduled to start shortly.

Over the next four years, the project is expected to create approximately 7,000 jobs, both on-site and indirectly. Like other recent infrastructure projects in B.C., the bridge is being delivered using the province’s Community Benefits Agreement framework, which prioritizes hiring local workers and those from under-represented groups.