Statistics Canada reports elevated need of workers in the construction sector; job vacancies sit 16 per cent higher than in July of 2021. 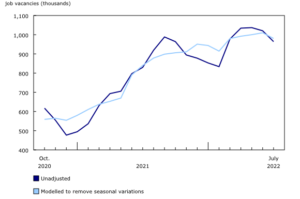 Across Canada, employers were actively recruiting for just shy of one million vacant positions in July, according to the most recent figures compiled by Statistics Canada. That includes more than 81,000 in the construction sector, which has been consistently dealing with an elevated need of workers, says the agency. While the overall job-vacancy numbers were down 5.5 per cent compared to June, vacancies remained elevated in July and were 16.2 per cent higher than during the same month in 2021.

The decrease in job vacancies from June to July was accompanied by an increase in unemployment, however the labour market remained tighter in July compared with a year earlier. In July 2022, there were 1.1 unemployed persons per job vacancy in Canada, up from 1.0 in June but down from 1.9 in July 2021.

The number of employees receiving pay or benefits from their employer, as measured by the Survey of Employment, Payrolls and Hours, edged up by 12,900 overall in July, which included 4,600 positions in the construction sector. Also rising were hirings in the architectural, engineering and related services segments, which gained 1,300 positions.

Statistics Canada also indicated that average weekly earnings were up 2.9 per cent in July, on a year-over-year basis, continuing their growth since June 2021.