Labour demand spikes higher as employers seek to fill more than 80,000 vacant positions in the sector. 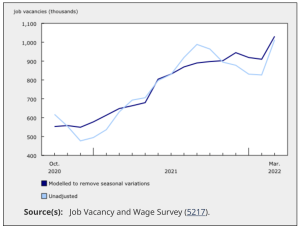 Employers in the construction sector were seeking to fill 81,900 vacancies as job openings in that segment rose to an unprecedented high in March, reports Statistics Canada in its latest Survey of Employment, Payrolls and Hours. The 27 per cent increase in the month followed five consecutive monthly declines. With the jump in openings, the job vacancy rate reached a record high of 7.3 per cent, up 1.3 percentage points from February.

The job vacancy rate, which measures the number of vacant positions as a proportion of all positions, vacant and filled, was 5.9 per cent in March 2022, matching the record high observed in September 2021.

Overall in the Canadian economy, the number of employees receiving pay or benefits from their employer increased by 118,100 in March. This coincided with the continued easing of public health measures, as remaining capacity limits affecting business operations had generally been lifted by the first two weeks of March, although some combination of masking, proof of COVID-19 vaccination, or COVID-19 testing remained a requirement in some settings in certain jurisdictions.

Labour demand tends to vary over the course of the year due to seasonal patterns, with increased economic activity typically driving higher demand for labour in the spring and summer and lower demand in the winter.