Construction sector gained more than 7,500 workers in June as employers in all segments of the economy continue to juggle job vacancies. 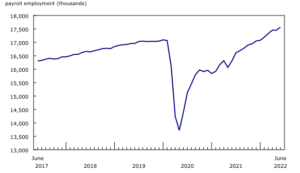 Payroll employment bounces back in June after declining in May.
(Sources: Statistics Canada, Survey of Employment, Payrolls and Hours (2612), table 14-10-0220-01.)

Canadian employers were looking to fill more than a million open positions in June, as the number of employees receiving pay or benefits from their employer rose by 114,600, reports Statistics Canada. Job vacancies across the country rose slightly more than three per cent, bumping up by 32,200 positions to 1,037,900. Total labour demand reached a record high of nearly 17.7 million for the month, ticking 1.4 per cent higher than May, and up 9.4 per cent on a year-over-year basis.

The job vacancy rate, which measures the number of vacant positions as a proportion of all positions, was 5.9 per cent in June, matching the record-high rate reached in September 2021 and up from 4.9 per cent in June of last year.

Nationally, the unemployment-to-job-vacancy ratio reached a record low of 1.0 in June, meaning that there was one unemployed person for each vacant job. This ratio was 1.9 in June 2021.

In the construction sector, payroll employment rose by 7,800 positions, a gain of just under one per cent in June. That partially offset the May losses. Gains were spread across six out of the 10 industries within the sector, with specialty trade contractors, non-residential building construction, and foundation, structure and building exterior contractors accounting for over half of the increase in June. By province, Ontario showed the largest gains, followed by British Columbia, Alberta and Manitoba.