Recruiting skilled employees expected to be an obstacle for nearly two-fifths of Canadian businesses. 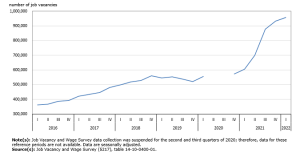 Vacancies were spread across many occupations with carpenters and construction trades helpers and labourers combining to represent more than 15,000 more openings in Q1 of this year than Q1 2020.

The job vacancy rate — which measures the number of vacant positions as a proportion of total labour demand (filled and vacant positions) — was 5.6 per cent in the first quarter.

One year later, in the fourth quarter of 2021, the number of unemployed decreased by 513,900. As employers faced the challenges associated with mounting job vacancies, the pool of unemployed workers who could have filled vacant positions continued to dwindle, with further decreases in unemployment from October 2021 to March 2022. According to the Labour Force Survey (LFS), the unemployment rate dropped to a record low of 5.3 per cent in March 2022, then again to a new record low of 5.1 per cent in May 2022. As a result, the ratio of unemployment to job vacancies fell to 1.3 in the first quarter of 2022, less than half the level in the first quarter of 2021.

Faced with increasing vacancies and competition for a limited supply of workers, some employers are able to respond by raising the wages offered for vacant positions. Across all sectors, figures cited by Statistics Canada suggest that offered wages were up 2.5 per cent on a year-over-year basis in the first quarter. In comparison, the Consumer Price Index (CPI) increased by 5.8 per cent over the same period, and average hourly wages of all employees rose three per cent.

The construction sector was one of several market segments with notably high increases in offered wages from the first quarter of 2021 to the first quarter of 2022, rising 6.6 per cent to $27.50. On a year-over-year basis, the increase in average offered hourly wage matched or exceeded the CPI increase in 23 of the 40 broad national occupational classification groups.