Employment in the sector dips for first time in almost a year. 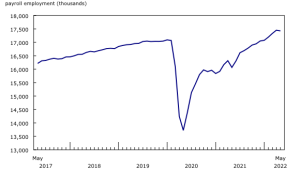 Statistics Canada is reporting that employment in the construction sector decreased by 17,500 in May. The 1.5 per cent drop marked the first monthly decline for the sector since July 2021.

Losses were spread across nearly all industries within the sector, with foundation, structure, and building exterior contractors recording the largest decrease, 6,900. Ontario accounted for more than two-thirds of the decrease, which the agency says was likely due, in part, to strikes that resulted in numerous delays in construction projects across the province.

Overall, across all industries, the number of employees receiving pay or benefits from their employer, as measured by the Survey of Employment, Payrolls and Hours (SEPH), decreased by 26,100 in May, or a fall of just 0.1 per cent. It was the first decline in employment reported in a year.

A bright spot could be found in the architectural, engineering and related services category, which gained 17,800 positions, recording one of the largest year-over-year increases of all segments.

On the earnings front, in May the average weekly earnings were up 2.5 per cent on a year-over-year basis, which was a lower rate of growth than what was reported in April (3.2 per cent) and March (4.2 per cent).

Across all sectors, employers in Canada were actively seeking to fill just over one million (1,005,700) vacant positions at the beginning of May, little changed from the record high of the previous month, and up more than 40 per cent from May of 2021 (not seasonally adjusted). New data developed by Statistics Canada to remove seasonal variations indicate that job vacancies increased steadily until December 2021 before stabilizing somewhat in recent months.

The job vacancy rate, which measures the number of vacant positions as a proportion of all positions (vacant and filled), remained at 5.8 per cent for a second consecutive month in May.

Job vacancies in construction reached 84,600 in May.