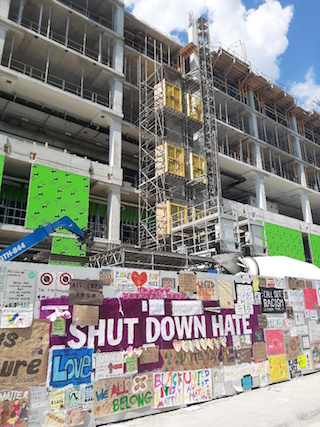 The latest incident happened June 27 in Toronto’s Regent Park neighbourhood, where The Daniels Corp. says it has launched its own investigation into what it calls an anti-Black incident.

“We are disgusted and horrified at this heinous act, which we are treating as a hate crime,” Mitchell Cohen, president of the company, said in a press release.

“This deplorable act against the Black community is unacceptable and we reaffirm that there is zero tolerance for racism, prejudice and hate on our construction sites and within our organization.”

Construction firm EllisDon said a noose was also found at one of its construction sites June 25.

“This is a disgraceful act by someone weak and cowardly,” said CEO Geoff Smith in a press release.

“We will do everything possible to identify, prosecute and evict anyone involved from our industry.”

EllisDon also reported finding two nooses at its worksite at a Toronto hospital on June 10. The company says it has contacted police and is conducting its own internal investigation.

Suze Morrison, the NDP’s member of provincial parliament in Toronto-Centre, said Saturday she also contacted police to follow up after seeing images of the nooses circulating on social media.

“This is a vile symbol of anti-Black racism that has absolutely no place in our loving and inclusive community,” said Morrison.

“Anti-Black racism is real, is present in our community and systemic in our institutions, and we need to take incidents of racism incredibly seriously in order to make sure Black Torontonians are safe.”

Meanwhile, the Toronto Transit Commission says it contacted police after it took a subway train out of service on Friday because someone vandalized it with the N-word misspelled.

The TTC says there were no cameras on the train, but an eyewitness has been connected with police who are investigating the incident.

—A solidarity stand-in was held in Regent Park July 1 to denounce the acts at the job sites around the city.

—A range of public officials and those involved the with the hospital project attended a virtual public forum June 30 aimed at fighting hate on Toronto’s east end.

—Over the final weekend in June, community members plastered the construction hoarding at the Michael Garron Hospital site with homemade signs and banners showing solidarity.