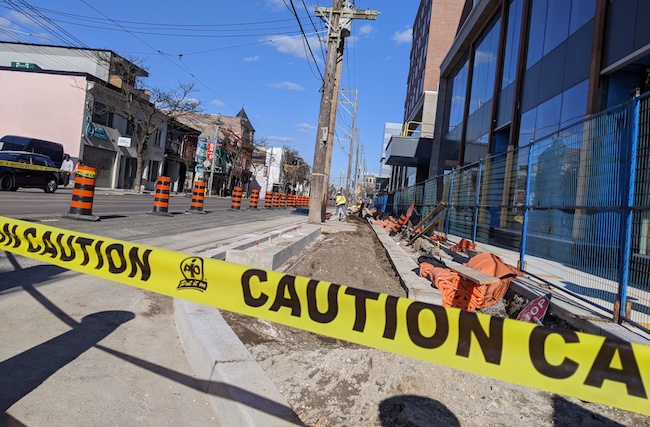 Construction on key hospital and transportation projects, as well as many ongoing residential jobs will to continue, while other job sites will be shut

After escaping an initial order a week and a half ago for all non-essential businesses to close, many more construction sites across Ontario have been given just over 24 hours to cease operations.

In a press conference April 3, Ontario Premier Doug Ford said only certain job sites, such as necessary hospital and transportation infrastructure projects, will remain open as the COVID-19 pandemic continues to spread across the province.

“Lives are on the line and we must take action now,” Ford said, pointing to “sobering” projections that up to 15,000 Ontarians could die of the virus.

Despite widespread shutdowns in all other segments of the economy, construction was exempted from the province’s closure order March 24 as an essential business.

The major shift Friday will see construction continue only on “critical” industrial, institutional and commercial projects, the province said. Among those that will remain open, the government pointed to industrial maintenance jobs such as those at refineries and petrochemical plants, as well as infrastructure projects such as new hospitals, roads and bridges. Construction related to plant retrofits tied to the manufacture of personal protective equipment or medical devices will also be exempt.

In terms of residential work, the province’s regulations are far less stringent. New residential starts will be halted, but residential projects “near completion” will be allowed to continue. Specifically, Ontario has left the following types of residential construction on the essential workplaces list. Projects where:

The Residential Construction Council of Ontario (RESCON), which represents many of the province’s residential builders, said the new orders from Queen’s Park are “balanced and appropriate.”

“We are pleased by the government’s decision to keep certain residential construction going,” Richard Lyall, RESCON’s president, said in a release. “As the premier has rightly noted, there are many people who are waiting for their homes to be finished in the next few weeks. We already have a significant housing crisis in Ontario and most of these homeowners who have sold their homes are at risk of being left on the street without these measures.”

On job sites that remain operational, RESCON said it will keep pushing contractors to closely follow the Ministry of Labour, Training and Skills Development’s health and safety standards. Ontario has laid out a lengthy set of guidelines for construction companies operating during the coronavirus pandemic. In its most recent update over the weekend, it released an update to its guidance document highlighting job site best practices.

During the April 3 press conference, Ford also noted the province has stepped up enforcement by adding 60 new safety inspectors. Over the past week, the province has carried out 583 site inspections and shut down five job sites, the premier said.

While RESCON and other construction groups, such as the Building Industry and Land Development Association (BILD), the Ontario Home Builders’ Association (OHBA) and the Provincial Building and Construction Trades Council of Ontario, came out in support of the partial shutdown, Ontario NDP leader Andrea Horwath criticized the decision for not going far enough.

“Construction should be truly essential projects only — a move made by other provinces weeks ago, and that needs to happen in Ontario now,” she said via Twitter, following the announcement.

All non-exempted construction sites will be forced to send workers home and shut down no later than 11:59 p.m April 4.

‘No time for half measures’: Ontario, Quebec order shutdown of non-essential businesses