Montreal’s new Champlain bridge to open July 1, but builders could be on the hook for millions for late finish

By David Kennedy, with files from The Canadian Press  June 17, 2019

After four years of construction, work on the new $4.2 billion Samuel De Champlain Bridge has entered its final weeks, but the question of penalties for the major delay remains 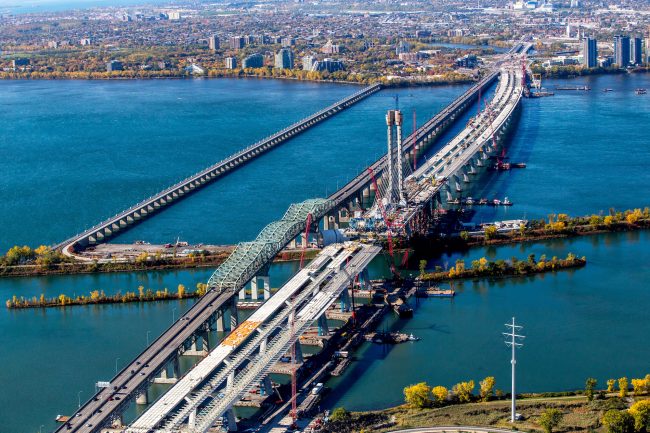 Infrastructure Canada confirmed June 17 that the northbound lanes of the 3.4-kilometre span will open to traffic June 24, while the southbound segment is cleared to start carrying vehicles out of Montreal July 1.

The updated timeline aligns with the government’s commitment at the end of last year to finish the job no later than June 30. The major infrastructure project is about six month behind its original schedule, however, meaning significant penalties for the builders can’t be ruled out.

“I am very happy to see that the people of the greater Montreal region will be able to drive on the magnificent Samuel De Champlain Bridge as of June 24,” François-Philippe Champagne, Canada’s minister of Infrastructure and Communities, said in a release. “Throughout the project, the Government of Canada has maintained its priorities: the health and safety of workers on site, the quality of the work to be delivered to Canadians and the durability of the work for the next 125 years.”

The final few weeks of work on the new bridge will consist of waterproofing and paving the bridge deck, according to the consortium in charge of the project, Signature on the Saint Lawrence (SSL). The build team is made up of SNC-Lavalin Inc., Dragados Canada, Flatiron Constructors Canada and EBC Inc.

After work is completed, rerouting traffic from the old Champlain Bridge to the new one will take place in two phases June 24 and July 1.

Meanwhile, Ottawa and SSL have still not resolved what penalty will be paid for the late completion of a project initially scheduled to be ready last December. Under the contract with the construction consortium, penalties were set at $100,000 a day for the first seven days, then $400,000 a day for subsequent days, with a ceiling of $150 million. Analysts have said the penalty could hit $75 million.

In an interview, Champagne said there will be a price paid for the delay. “I have always said that if there are delays, there will be consequences,” he told The Canadian Press. “The discussions are going to continue, because in a project of this size, there will always be demands.”

If the two parties are unable to resolve their differences, it will be up to a court to decide, he added.

Along with three lanes for traffic in each direction, the new cable-stayed bridge has a central corridor with a path for pedestrians and cyclists and a light rail area to accommodate the under-construction Réseau express métropolitain (REM). About 50 million vehicles, as well as 11 million people on public transit, are expected to use the bridge each year.

As crews finalize work on the new bridge, the federal government is already preparing to tear down the old steel truss cantilever bridge that’s carried traffic between Montreal and Brossard for more than 50 years. Jacques Cartier and Champlain Bridges Inc., the federal crown corporation responsible for overseeing the Quebec bridge, anticipates the deconstruction project will take three years and cost approximately $400 million.