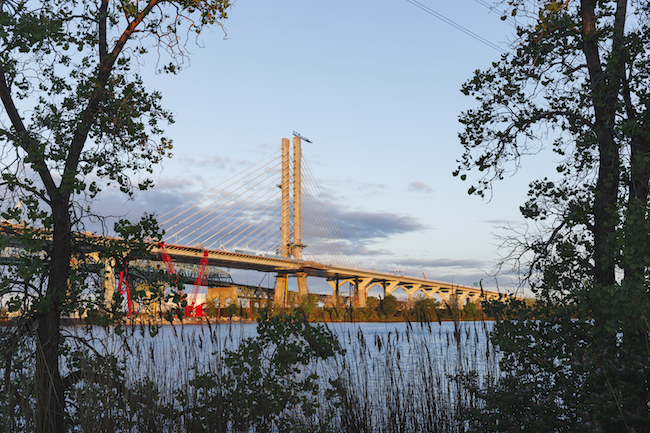 Montreal’s new Samuel De Champlain Bridge fully opened to traffic in both directions July 1, while its predecessor was officially retired after 57 years of service.

The new 3.4-kilometre span that crosses the Saint Lawrence River and connects the city with its suburbs on the south shore, has three lanes in each direction, a space to accommodate a future light-rail system, plus a path for cyclists and pedestrians set to open later this year.

The new bridge was originally to open last December but delays pushed back the opening and added another $235 million to the original $4.2 billion price tag.

The elegant, modern structure is a striking contrast to its crumbling counterpart, long one of Canada’s busiest spans.

On Monday, a parade of three cars from 1962 — the year of the bridge’s construction — took a last trip across the old span to mark its retirement.

Sandra Martel, the interim CEO of the group that manages the bridge, noted the efforts that were made in recent years to keep the disintegrating bridge running.

They included an emergency operation to install a 75-tonne superbeam to stabilize one of the bridge’s girders when a crack was discovered in 2013, as well as 24/7 monitoring and countless lane closures and repairs.

“With approximately 50 million trips per year and $20 billion in goods passing over it annually, no effort was spared to make sure one of the busiest bridges in Canada remained operational and safe,” she said in a press conference atop the old bridge.

Deconstruction work on the old Champlain bridge is set to begin next year. It will take about three years to dismantle at an estimated cost of $400 million.