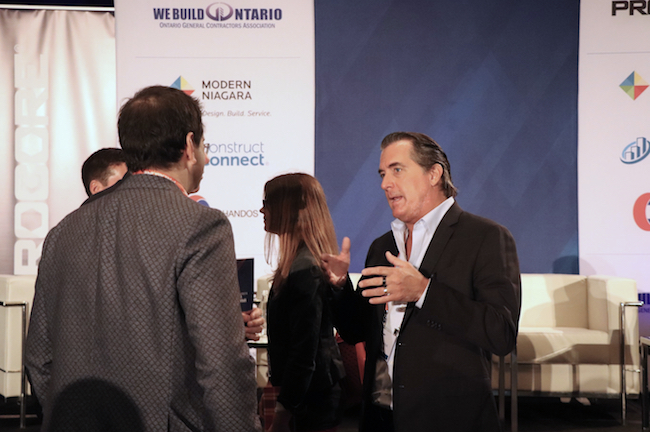 TORONTO—When Procore Technologies Inc. was founded close to two decades ago, early smartphones were just starting to break into the market, the first iPad was still eight years away and the construction industry was showing little desire to change. 17 years later, the business has evolved considerably. Today, it’s next to impossible to find a job site where smartphones aren’t ubiquitous, tablets aren’t taking on an ever-increasing role and embracing change isn’t mandatory.

As one of the most-used construction management software platforms in the industry, Procore is playing no small role in the shift to more collaborative, better-connected projects. The company’s founder and CEO, Tooey Courtemanche, got in on the construction technology space on the ground floor and continues to help contractors adapt to new ways of doing business.

Courtemanche was in Toronto earlier this month at an Ontario General Contractors Association event focused on spearheading change in construction leadership. The Procore chief joined Mike Winters, the executive vice-president of mechanical contractor Modern Niagara, and Chandos Construction President Tim Coldwell on a panel that delved into some of the major opportunities and challenges surrounding leadership.

On-Site caught up with Courtemanche after the discussion:

As you’ve seen things evolve over the past 20 years or so, where do you think we are in the stage of adoption of technology?

“Technology was not adoptable, because construction happens in the field, until at least 2010 when the iPad came out, and probably more like 2012 to 2014. So, I would say we’re in the earliest stage possible.

“The concept of actually capturing data in a structured format and [being] able to leverage it to make better decisions, we’re in day one. Construction is so complicated. There’s so many moving parts, there’s so much information flow and there’s so much propensity to work off the wrong piece of information, that as soon as we get that right… I think the industry is going to elevate drastically.

“But when I look at where we are, I really think it’s day one. And by the way, that’s not depressing to a guy who’s been doing this for 20 years, I’m finally seeing what I’d hoped was going to happen, start to happen. I couldn’t be more optimistic.”

Could you point to three or four of the biggest challenges you’re seeing in construction?

“One point that I love to be able to make is because I have this vantage point of seeing a global company and the global implementation of Procore, there is one challenge that is ten-fold above the second-level challenge, which is finding qualified people. And that’s no new news.

“What I find interesting is that has become a forcing function to drive the industry to figure out a way to attract and retain great talent, which is great because what it’s forcing the industry to do is to come up with ways to change the old guard’s mentality and actually make the environment of working in construction feel like a career… Where 15 years ago when I’d walk into a construction company, it was kind of a rough and tumble environment, the first thing that we talk about normally in most meetings with most executives these days are things like diversity and inclusion. That is a huge shift. Because they want a diverse workforce and a diverse workforce means you actually have a wider pool of people to draw from.

“[The next challenge is] acknowledging that this is probably the last industry to go through the transformation from analog to digital and there’s fear in that because that’s a big change. Most major industries have gone through this change. It can be painful because doing things the way you used to is no longer a competitive advantage. There’s a lot of confusion and fear around ‘how do we get onto the digitization train in a way that is going actually benefit our business and not tank our business.’ It’s not just the technology, it’s the mental aspect of adopting new ways of thinking and being more competitive.

“Finally, the third, which is very close behind, is that mindset change of: ‘The five of us are working together on this project, none of us work for the same company, and my win is going to be your loss.’ People have to recognize that when they’re coming together to work on a project, they are a team and that team collectively will win and fail together. As that mindset shifts, you’re going to see the industry change, I firmly believe that that challenge is being faced. [Integrated project delivery] is a great example. It is something that’s coming and you’re never going to be able to put the toothpaste back in the tube after that comes.”

Productivity has been a big issue for a long time in construction, especially when compared to other industries, do you think we’re coming to a point where we’ve turned a corner and things are starting to get more efficient?

“Yes. The reason I know that is severalfold.

“One is the global percentage of dollars that are spent on IT are very low compared to the average in the construction industry, but we’re seeing that creep up.

“Because there was very little ROI on an investment in technology… before 2010, let’s say, the only technology contractors really bought were ERP solutions and once you buy your accounting system, what else are you going to spend your [IT] dollars on?

“And so, I believe, one indicator is as we see the increased spend in IT in the construction sector creep up — not even close to the average, but creep up — we’re seeing that as a result of people making investments because the ROI in technology today is accretive to their business.

“I think we’re turning the corner, [but] I think we have a long way to go. You can’t do what you did yesterday today and expect things to change — you actually have to try new things.”

What do you see as technology’s role in terms of recruitment and retention?

“I hear it every day and I treat it as a compliment… A lot of our customers use Procore as a tool to attract talent. We have customers that will only hire Procore-certified college graduates, or people that have a Procore certification because they know that they’re qualified to run a system and they’ll be a contributing employee.

“The other way I see technology impacting the workforce is the trade workforces. A lot of the MEP contractors — the folks that used to be in the field and they were cutting HVAC ductwork and taping in the field — their job has become much more technical now. They’re taking the BIM model and they’re exporting the information out of the BIM model to build a big prefab HVAC unit off-site, down to a very high level of accuracy. Then the folks that install it in the field are essentially just screwing it to the ceiling in duct work that’s actually already been placed. The skilled workforce’s skill level has got to go up and that’s really encouraging because it’s becoming less of a brute force job and much more [workers] having to use [their] intellectual horsepower to do it.

“I think technology is changing every rung of the ladder. This may be a little controversial, but I’ll say the one group that is the next frontier is actually getting executives to understand how they can look at this pool of data that they’ve gathered and make great decisions for the business off of it.

“This pool of data hasn’t been here very long, so… now that the people in the field have adopted technology and they’re entering all this information, the executives now have to determine ‘how do I look at that data to run my business?’ And that’s really where the next opportunity lies.”