Opening of Champlain Bridge delayed up to six months

Despite "significant" progress on construction, the six-kilometre span will not open Dec. 21 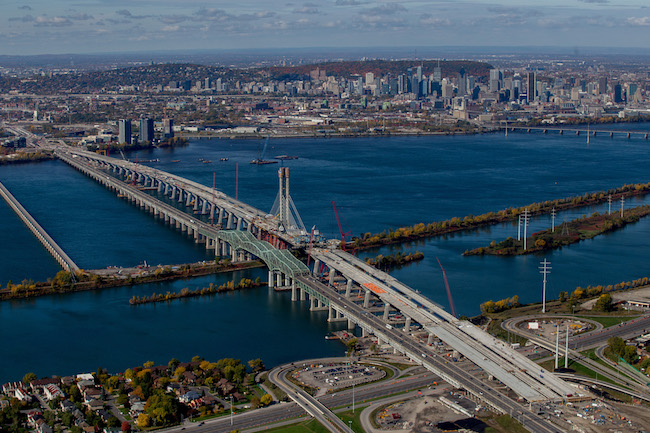 An aerial view of the new and old bridges included in Signature on the St. Lawrence’s latest project update. PHOTO: SSL

MONTREAL—It’s official. The new Champlain Bridge will not open this December.

Infrastructure Canada said Oct. 25 that construction on the new span over the St. Lawrence River will continue into next year, confirming a report from Canada’s auditor general in May that described the Dec. 21 deadline as “very challenging.” Canada’s new Minister of Infrastructure and Communities, Francois-Philippe Champagne, further fueled speculation in July when he said he was not sure the work could be sped up enough to meet the deadline.

The federal government agency said the delay is in spite of “the progress that has been made over the last few months.” It added that the six-kilometre bridge will open as soon as possible without compromising the safety of workers or the public.

“Today’s construction update makes clear that significant progress has been made on this critically important project and that final work necessary to open the bridge to traffic will take place in the new year,” Champagne said in a statement.

The bridge will replace an aging structure of the same name that has carried traffic to the opposite side the St. Lawrence east of Montreal for more than 50 years.

Signature on the St. Lawrence, the construction consortium responsible for building the bridge, has detailed “significant” progress on the project over the past several months, but said weather-dependent work such as waterproofing and paving is unlikely to start before spring.

Ottawa set June as the new deadline for the bridge, adding that it will release an official date in the new year.