The steel truss cantilever bridge has carried traffic over the St. Lawrence River for more than 50 years 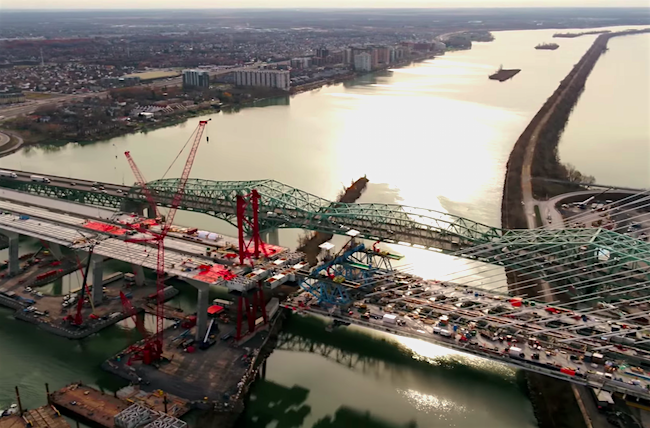 The old and new bridges side-by-side during a recent flyover. PHOTO: Nouveau Champlain/YouTube

MONTREAL—With 37 freshly-poured piers spread across the St. Lawrence River, the vast majority of new steel fastened into place and the deck of the new Samuel De Champlain Bridge nearing completion, the federal government is making plans to tear down the adjacent bridge that’s carried traffic from Brossard, Que. to Montreal for more than 50 years.

The new span was scheduled to open late last year, but delays have forced the aging Champlain Bridge to remain in use. The cable-stayed replacement is now expected to open no later than June 30, about six months behind schedule. Crews are working to finish the job sooner, however.

Once work wraps up, the focus will shift to deconstructing the steel truss cantilever bridge built between 1957 and 1962.

Jacques Cartier and Champlain Bridges Inc., the federal crown corporation responsible for overseeing the pair of Quebec spans, will take the lead on dismantling the structure. The job is expected to cost approximately $400 million.

A pre-planning study for the deconstruction work was commissioned by the crown-owned entity in 2017. It investigated numerous different options for tearing down and recovering certain materials from the bridge. JCCBI has not yet released what method it intends to pursue, but said it will release more information about its plans in the coming months.

Deconstruction work is scheduled to start shortly after the Samuel De Champlain Bridge is complete and run for about three years.