Dismantling of old Champlain Bridge to take 43 months, run through 2024 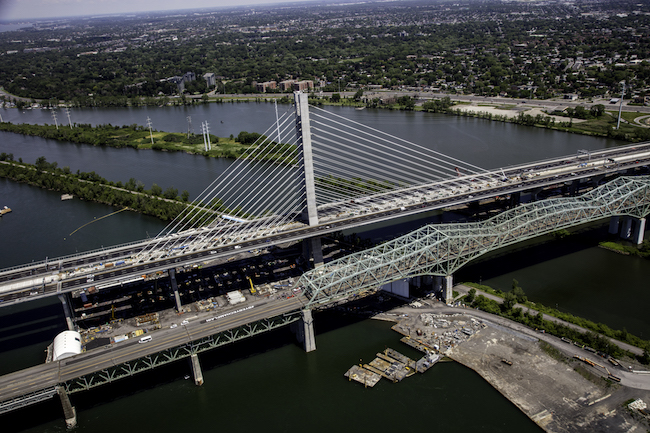 The old cantilever bridge next to the new cable-stayed span in Montreal. PHOTO: Infrastructure Canada

The piece-by-piece deconstruction of the old the Champlain Bridge, now underway in Montreal, will last nearly four years, with crews tackling the main steel section over the St. Lawrence Seaway starting next fall.

Jacques Cartier and Champlain Bridges Inc. (JCCBI), the federal agency that oversees the two Montreal bridges, detailed the timetable and for the project in a press conference earlier this month.

The briefing also revealed the construction team’s plan to take down the bridge using a range of barges, jetties, strand jacks, excavators and cranes. The Nouvel Horizon St-Laurent (NHSL) consortium, made up of Pomerleau Inc. and Delsan-A.I.M. Environmental Services Inc., signed the contract to take on the project this June and has already started work on early components.

“This ambitious deconstruction project poses enormous technical and environmental challenges,” Sandra Martel, the CEO of JCCBI, said in a release. “NHSL has begun working on Nuns’ Island, which is a successful first step.”

Martel added the processes chosen for dismantling the bridge are innovative and will minimize the impact on locals.

The methods themselves vary depending on the section of bridge. NHSL has broken the upcoming parts of the project down into several main components, including Nuns’ Island, the St. Lawrence River, the Seaway and Brossard. With deconstruction progressing roughly west to east, tear-down work on the Brossard segment will start last.

Demolition on Nuns’ Island, or Île des Sœurs, has already commenced and is expected to take nine months, with crews employing standard excavators and cranes working from temporary jetties.

On the water, where about 65 per cent of the project will take place, teams will need to get more creative.

For the sections resting on concrete piers over the St. Lawrence River, reinforcements will be removed and spans lowered onto a catamaran barge. The piers and footings will then be mechanically broken down both above and below the waterline.

To safely dismantle the steel section of bridge over the Seaway, the suspended span weighing around 2,200 tonnes will first be lowered onto a barge using strand jacks. It will be taken apart on the barge as crews prepare to dismantle the cantilever sections and anchor spans. For this, a jetty-mounted crane will remove the steel piece by piece.

In Brossard, the construction team will use the same procedure as on Nuns’ Island — a mix of excavators and cranes working from jetties.

In all, the deconstruction work is expected to cost $225.7 million. The wider project, which includes environmental protection measures, material reuse programs, shoreline redevelopment and research and development will total about $400 million.

The deconstruction is scheduled to reach completion by early 2024, with the redevelopment of the shoreline running into 2025.

Watch a video breakdown of the deconstruction process: