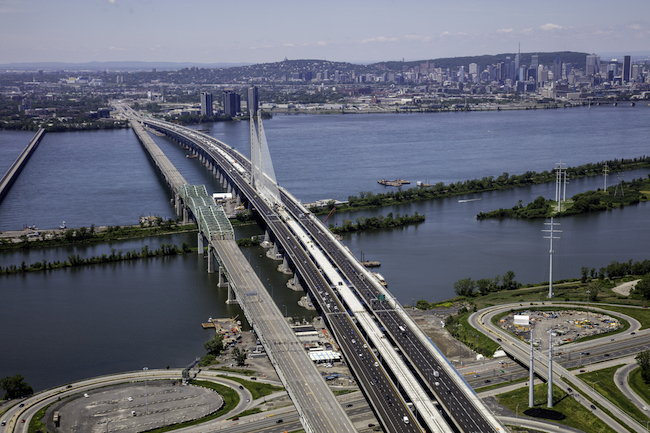 The federal crown corporation responsible for a pair of heavily-trafficked Montreal bridges has picked a winning bidder to tear down the deteriorating Champlain Bridge that carried traffic over the St. Lawrence River from 1962 to 2019.

The modern replacement for the busy Montreal span opened last summer, clearing the way for the deconstruction project expected to take about three years. Jacques Cartier and Champlain Bridges Inc. said March 5 it has picked the Nouvel Horizon St-Laurent consortium, made up of Pomerleau Inc. and Delsan-A.I.M. Environmental Services Inc., to take on the high-profile project.

“The Champlain Bridge deconstruction is the largest project in our organization’s history and is a unique project for Quebec,” JCCBI’s CEO, Sandra Martel, said in a release. “Our goal with this new agreement, is for the project to adhere to exemplary practices based on major sustainable development principles.”

The precise cost of the project won’t be released until next month when the contract is expected to be finalized, but the teardown work is estimated at $400 million.

With the project tilting toward deconstruction rather than demolition, locals hoping for an explosive felling of the old 3.4-kilometre steel and concrete span will likely be disappointed. The bridge will instead be taken apart piece by piece with a focus on reusing as many components as possible. JCCBI said the bridge contains about 250,000 tonnes of concrete and 25,000 tonnes of steel. About 12,000 tonnes of asphalt make up the road surface.

The aging bridge has been in rough shape for years, as design issues led certain structural components to deteriorate more quickly than initially expected. In 2013, for instance, it required significant emergency repairs. While there was some initial pressure to preserve the bridge for pedestrian or other uses, JCCBI has said that approach is impractical due to several million dollars in annual inspection costs and likely even higher repair bills.

More details about the deconstruction methods and timetable will be released this spring.

Champlain Bridge project to be finished by December