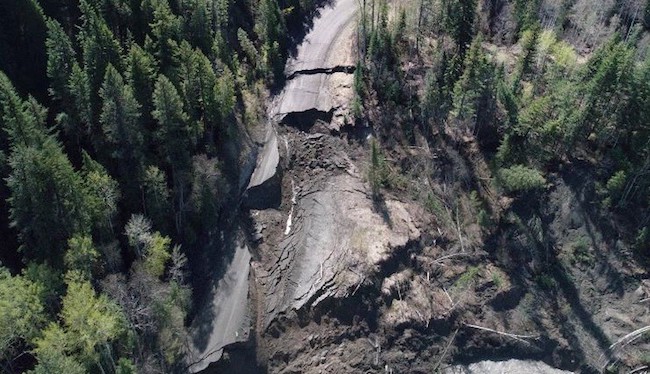 An aerial shot of one of the washed out potions of road in 2018. PHOTO: Government of B.C.

A project to rebuild a section of the West Fraser Road south of Quesnel, B.C. is set to begin next month.

The province’s Ministry of Transportation and Infrastructure has awarded Prince George-based Enviro-Ex Contracting Ltd. a $37.7 million contract to rebuild the road on the west side of the Fraser River that was washed out by flooding three years ago. Work includes building a new bridge over Narcosli Creek and constructing 5.6 kilometres of new two-lane road on a new alignment that bypasses the active slide area.

“Since flooding washed out West Fraser Road in spring 2018, we’ve been actively working on a long-term solution,” said Rob Fleming, B.C.’s minister of Transportation and Infrastructure, in a release. “Construction is anticipated to begin next month on a new alignment that will restore direct access to Quesnel and provide a reliable route for people who live and work in the area.”

As part of the separate agreement with the province, the ?Esdilagh First Nation has already begun site preparation ahead of the major road work next month. First nation community members are the main users of the road, which connects to homes, farms, ranches and logging areas. A detour has been in place since the washout, but adds significant time.

Construction on the realigned road is scheduled to take about 2 1/2 years, running from April 2021 until fall 2023.