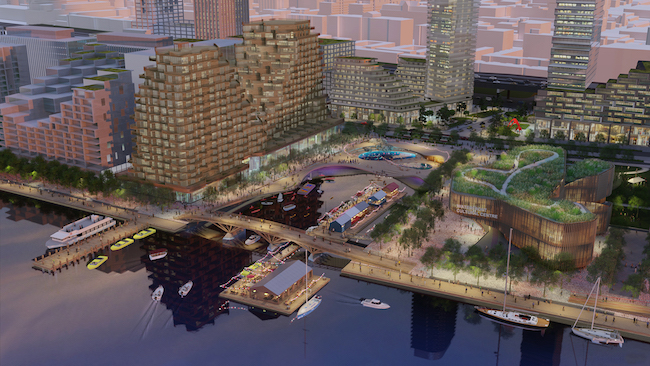 A rendering of one vision for the 12-acre site on the increasingly crowded waterfront. PHOTO: West 8 + DTAH/Waterfront Toronto

10 months after Google affiliate Sidewalk Labs walked away from early plans to develop a 12-acre plot of land known as Quayside, Waterfront Toronto has begun the search for a new partner.

The joint federal-provincial-municipal organization said March 10 it has issued a request for qualifications (RFQ) to identify a new development partner for the site on Toronto’s increasingly crowded eastern waterfront.

“The people of Toronto have told us that they want to see a bold vision realized on the waterfront that reflects the confident, welcoming, and imaginative civic spirit of our city,” Stephen Diamond, chair of Waterfront Toronto’s board, said in a release.

“We are looking for leaders in the development field that will share our ambition to create a place that fuses Quayside to the water, and provides more beauty, utility, and originality than previously imagined. We want Quayside to be timeless, adaptive, and to propel us into our rightful place among the great waterfronts of the world,” Diamond added.

To evaluate potential partners, Waterfront Toronto said it will be looking for companies or teams with proven experience, a thorough design portfolio and the financial resources to create a mixed-use community in Quayside.

Before stepping aside last year, Sidewalk Labs had been working on development plans for the site since 2017. Its smart city blueprints included a wide range of futuristic components, but it faced criticism from the outset, most vocally from privacy advocates. It cited the “unprecedented economic uncertainty” created by the pandemic for pulling out of the project.

The deadline for teams to enter the new RFQ process is May 12, at which point Waterfront Toronto plans to shortlist several proponents and issue of a request for proposals. The organization aims to pick a winning bidder by the end of 2021.