Ontario shies away from infrastructure stimulus, but stands pat on existing spending plans

Though no new funding has been set aside, Infrastructure minister Laurie Scott said the province has an aggressive pipeline of work 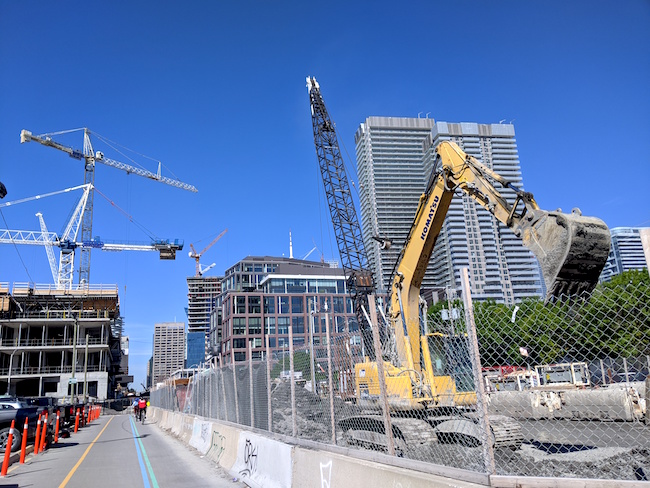 Road work on the Toronto waterfront. Infrastructure spending is often seen as critical during economic slowdowns

The Ontario government is resisting calls to pad its infrastructure spending plan to help jolt the economy as the recovery from COVID-19 starts gaining momentum.

In a virtual event June 18, Minister of Infrastructure, Laurie Scott, and president and CEO of Infrastructure Ontario (IO), Ehren Cory, spelled out the details of the province’s Spring 2020 P3 Market Update. The project breakdown includes several additions, but does not add funds to the province’s 10-year, $144 billion capital spending plan released last year.

“We can be assured with this big pipeline that we have announced and are reconfirming that we have a very big stimulus package happening right here in the province of Ontario that we are determined to continue with,” Scott said during the event, which was hosted by the Canadian Council for Public-Private Partnerships (CCPPP).

The start of procurement for several big-ticket transit projects in the GTA, including the Ontario Line, were the most significant components of the update, though the work had already been made public this March. Two major new highway projects were also included — work on Hwy. 3 in southwestern Ontario and construction on Hwy. 17 outside Ottawa.

An update to IO’s health care portfolio was postponed until the fall as the crown agency and the ministry review timelines in light of the pandemic.

In total, Ontario’s P3 pipeline includes 37 projects worth more than $60 billion. 13 are in procurement and two dozen are in the pre-transaction phase.

While Ontario’s confirmation of its previous infrastructure plans is positive news for the construction industry, it falls short of commitments in other provinces to boost spending following the pandemic.

Looking back a few short months to the pre-COVID market, Cory noted the biggest uncertainties were around capacity. “The number one question was, ‘How are you going to get all this work done? Do we have the capacity?'”

Though no new funding has been set aside, Cory said the pipeline of work Ontario already had on its books for 2020 is a booster shot in itself. “This pipeline is stimulus, it is part of recovery,” he said.

With an “aggressive” pipeline Scott downplayed the possibility of adding funds to the province’s infrastructure budget at several points during the event. She did note lines of communication with the federal government have been wide open through the COVID-19 crisis, however, and that discussions about additional funding are ongoing at a number of different levels. “We’ll see what comes out of it,” she said.