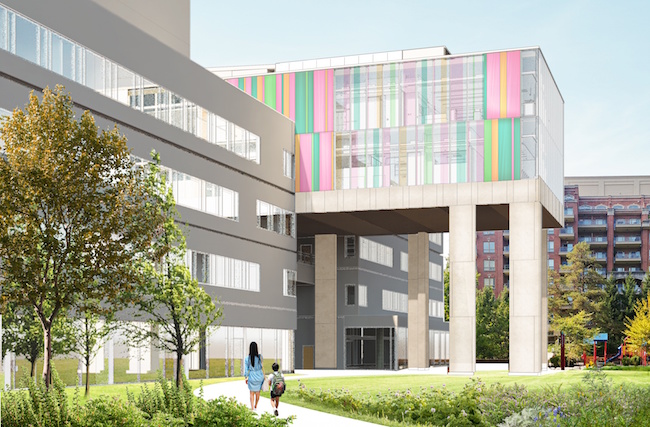 A rendering of the addition to the hospital in Toronto’s Leaside neighbourhoood. PHOTO: Holland Bloorview/Gow Hastings Architects

A two-storey addition to a children’s rehabilitation hospital in Toronto will start later this month.

The research arm of Holland Bloorview Kids Rehabilitation Hospital officially broke ground in Leaside May 10 on an expansion that will add 11,000 sq. ft. of new space to the facility. It is the final phase of a three-stage, $32 million project to scale up the Bloorview Research Institute (BRI), which focuses on childhood disability research.

“Thanks to our generous donors and supporters of the Grow Holland Bloorview Research campaign, this research expansion will unlock a world of new possibilities so we can impact more kids and families around the globe,” said Tom Chau, vice-president of research at Holland Bloorview and director of the BRI, in a release.

Buttcon Ltd. is heading the project as construction manager. It was designed by Gow Hastings Architects. The work will add an elevated wing overlooking the Burke Brook Ravine with space for new research equipment and personnel.

The second phase of the donor-funded expansion is ongoing, with crews retrofitting 17,000 sq. ft. of space on the hospital’s fourth floor.

Construction on the two-storey expansion, the last stage of work in the wider project, will start later this month. It is scheduled to be complete by summer 2022.