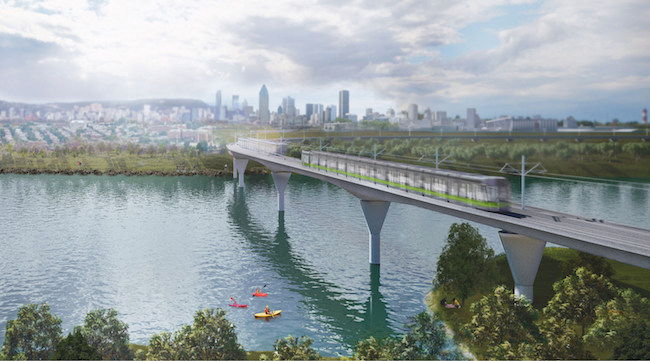 Part of the federal Liberal government’s infrastructure plan unveiled in 2016, the arms-length government institution is designed to coax private investors into the public works business.

The CIB said payments on the loan will start at one per cent and eventually escalate to three per cent over the 15-year term. Under the terms of the deal, CDPQ Infra Inc., a subsidiary of Caisse, will maintain its 70 per cent equity stake in the REM project. The government of Quebec owns the remaining 30 per cent interest.

Loan in hand, the $6.3 billion, 67 kilometre light rail project is now fully-funded. Plans for the system include 26 stations and electric, fully-automated trains.

With public transit being one of the bank’s priority areas, CIB president and CEO Pierre Lavallée said the rail project fits the new institution’s mandate.

“Our role is to invest alongside private sector and institutional investors, and other public-sector partners to facilitate the development of strategic projects like the REM,” he said in a statement.

Related: Canada Infrastructure Bank aims to take P3s ‘a step further’Construction on the project is already underway. SNC-Lavalin, Dragados Canada, Inc., Aecon Group Inc., Pomerleau Inc. and EBC Inc. were all part of the winning consortium and broke ground on the project in April.

Crews are expected to ramp up work this fall, while trains are scheduled to begin running in summer 2021.

Though critics have been skeptical about the role the CIB has to play in Canada’s infrastructure landscape, Lavallée says the bank will support projects that may otherwise not have been built.