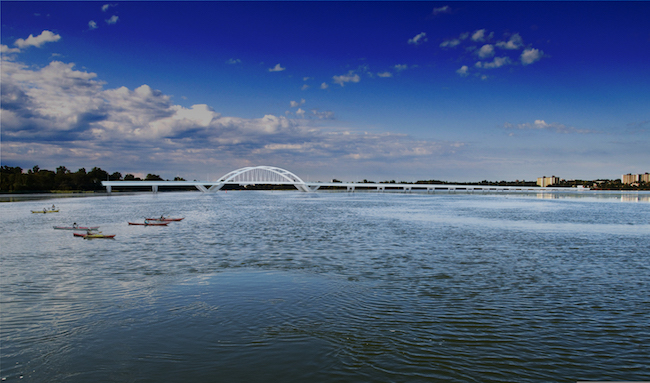 A rending of the 1.2-kilometre Third Crossing bridge. PHOTO: City of Kingston

KINGSTON, Ont.—Early construction on a major new bridge over the Cataraqui River at Kingston, Ont. is set to get underway this fall.

The City of Kingston announced the project team for the $180 million bridge Aug. 22. It tapped a consortium made up of Peter Kiewit Sons ULC, Hatch Ltd. and Systra International Bridge Technologies for the project, which will use an Integrated Project Delivery (IPD) model—often touted as a successor to the traditional design-build model.

“Today is another significant step in moving this project forward,” said Kingston Mayor Bryan Paterson. “This is the largest infrastructure project our city will undertake for years to come, employing hundreds of people over several years.”

Kiewit and its partners will be responsible for the design and construction of the new 1.2-kilometre bridge.

The span will become the third to cross the Cataraqui at Kingston. Supplementing the century-old Lasalle Causeway and the bridge that carries Highway 401 over the river north of downtown, planners say the Third Crossing will support continued growth, as well as better connect the eastern and western segments of the city.

Funded by equal contributions from the municipal, provincial and federal governments, the city said the bridge will be the first in North America to use the IPD construction model.

Site preparation work and design validation are scheduled to get underway this fall. Crews are expected to begin full-scale construction work next summer.