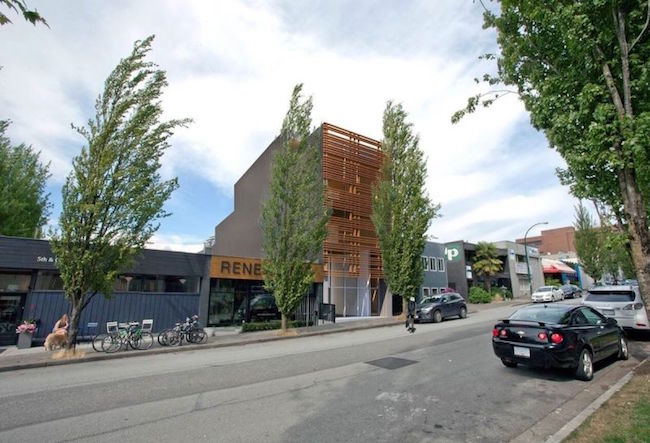 A rendering of the new four-storey office building to be built in Vancouver’s Mount Pleasant neighbourhood. PHOTO: NRCan/Hemsworth Architecture

A pair of government funding announcements last week will provide more than $5 million for 13 mass timber projects throughout B.C., giving the fast-growing market for cross-laminated timber and other such materials an added shot in the arm.

In separate funding deals April 7, the provincial government said it will provide $4.2 million for a dozen mass timber demonstration and research projects, while Natural Resources Canada disclosed a $900,000 investment to support the design and construction of a mass timber office building in Vancouver.

“As we work to put the pandemic behind us, we will continue making strategic investments that position B.C. to come back stronger on the other side,” Premier John Horgan, said in a release. “Mass timber is good for forestry-dependent communities, workers and the environment — because it adds value rather than just volume. That’s why growing the sector is key to building a strong and sustainable economic recovery that reaches everyone.”

The B.C. backing covers eight demonstration projects that “reflect a range of different building types and approaches to using mass timber that will highlight the versatility and performance of this building material.” The four research projects, meanwhile, will study issues such as mass timber’s fire performance, its costs relative to steel and concrete, and its carbon benefits versus conventional materials. A backgrounder with the specifics on the 12 projects is available here.

The province is also introducing a new mass timber advisory council to help position B.C. as a leader in the production and use of mass timber. The government initiatives follow a revision to the province’s building code in 2019 that increased height limits for timber buildings from six to 12 storeys.

NRCan’s support, meanwhile, backs work on a four-storey mass timber office at Ontario Street and East Fifth Avenue in Vancouver. The project, known as oN5, will employ cross-laminated timber (CLT) panels and be built to Passive House standards. Naikoon Contracting Ltd. is leading construction on the project, which was designed by Hemsworth Architecture.

The funding comes from the federal department’s Green Construction Through Wood Program, which is designed to support the use of wood in a wider range of construction projects. While light wood frame construction has been popular across Canada for decades, mass timber has gained ground recently, driven by advances in CLT and the global focus on reining in carbon emissions.