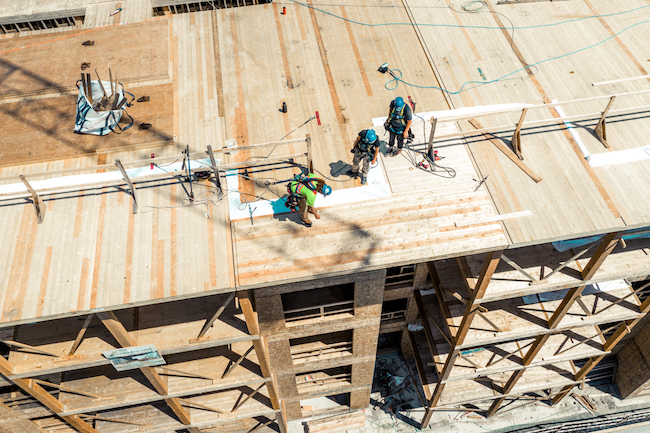 By the middle of the 20th century, tall wood buildings seemed to have topped out. Canada’s “brick and beam” construction boom of the late 1800s and early 1900s had run its course, overtaken by new concrete and steel structures seen as both sturdier and more resistant to fire.

Decades later, wood building is undergoing something of a renaissance.

“There is a rebirth of the good old heavy timber,” says Erol Karacabeyli, lead scientist in the Sustainable Construction group at FPInnovations, a non-profit forest products research centre.

In Montreal, Toronto and Vancouver many of the early brick and beam examples, with their solid timber posts and brick-and-mortar exterior walls, have endured until today, Karacabeyli adds. Most have undergone significant retrofits to bring them up to modern fire and seismic codes and convert their factory floor plans to office space.

Karacabeyli, among many others, expects the market to reach new heights in the years ahead, presenting a growth outlet for contractors who gain early experience in the field.

“If a construction company doesn’t have a wood strategy, I think they may miss some opportunity,” he says.

Changes to the National Building Code of Canada (NBC) are expected to officially herald in the new area era of wood building later this year. The update will include mass timber towers as high as 12 storeys, up from six currently. Provincial and local guidelines, which typically use the NBC as a model, are expected to follow suit.

Some provinces, however, have already jumped the gun. The success of demonstration projects, such as the 18-storey Brock Commons in Vancouver and the 13-storey Origine in Quebec City, have prompted B.C., Quebec and Alberta to green-light projects up to 12 storeys. All cite potential benefits on the climate change file, and a boost to their local forestry industries. 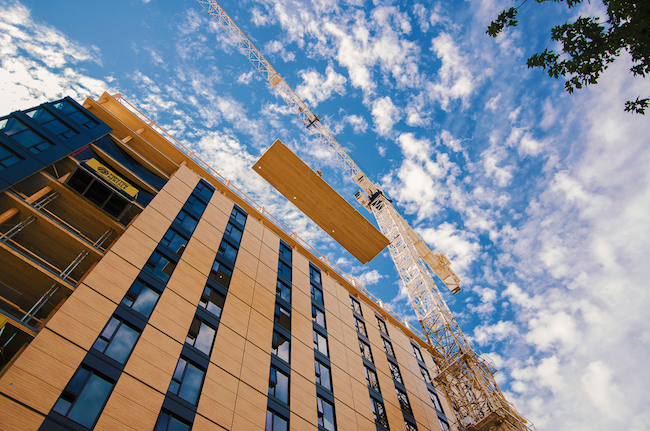 Work on the 18-storey Brock Commons building in Vancouver. The project was seen as a major step forward for mass timber. PHOTO: Structurlam

Hardy Wentzel. CEO of Structurlam Mass Timber Corp., says the mass timber industry in both Canada and the U.S., is getting excited about the upward momentum.

Structurlam was a key supplier for Brock Commons, manufacturing hundreds of glulam columns and CLT panels for the 53-metre (174-foot) tower. Though the “lightning rod of change,” as Wentzel calls it, was built in Canada, the building code adjustments it helped advance were more ambitious south of the border. Starting next year, mass timber buildings in the U.S. will be allowed to reach 18 storeys.

Despite the smaller increase in Canada, Wentzel anticipates a flurry of activity in the industry.

“The bulk of square footage of construction, kind of the sweet spot, is in that nine to 12 range anyway, so it works out pretty good,” he says.

Adera has a 50-year history in the Lower Mainland, mainly focused on light frame wood buildings. It has recently begun incorporating CLT into its builds, and also holds a small stake in Structurlam.

“If you’ve ever been in a [light] wood frame building versus a CLT building, they’re two different worlds altogether,” Andreasen says. “The CLT building feels like concrete. I mean, it’s solid as a rock.”

Adera completed its first mass timber project, a six-storey, 104-unit residential building known as Virtuoso in 2018. While beginning to explore taller towers, it is currently working on another six-storey, 179-unit project called Crest.

Working out of four facilities in the Penticton, B.C. area, Structurlam buys a mix of standard and special grade lumber off of the commodity market to make its glulam and CLT.

The lumber advances through a number of manufacturing steps — conditioning, finger jointing, planing and layup — before being introduced into a press, where the finished product truly takes shape. Incorporating information from a BIM model, the CLT panels then enter the CNC (computer numerical control) machining area, where mechanical and plumbing openings, among others, are punched.

The products go through a final finishing and quality control phase before being loaded and trucked to site. Like other modular, or pre-fabricated building materials, the mass timber components are hoisted into place on-site. 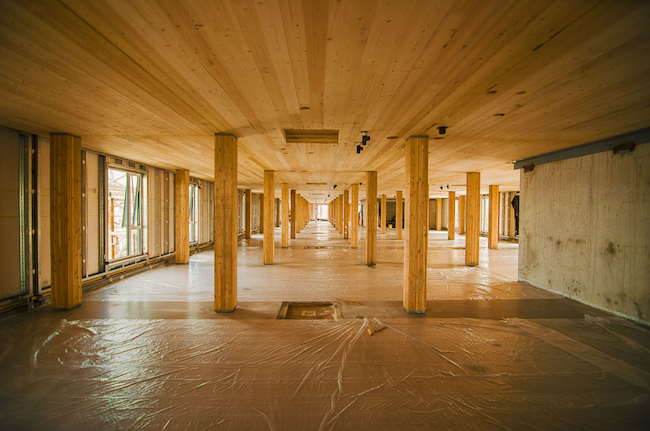 The speed of construction is one of the main selling points for mass timber. At Brock Commons, for instance, crews added two floors per week. And though CLT typically costs a little more, Andreasen notes, the time and labour savings more than make up for the added material cost.

“At the end of the day, by bringing it in and erecting it up to 30 or 40 per cent faster than a typical stick frame product, we were saving money in the long haul,” he says.

Weight is another area mass timber can translate to cost savings.

“Wood is about one-fifth the density of concrete,” Wentzel says. “As a result, you get these tremendous weight savings, which result in cost savings in other areas of the project, like your concrete foundations, like your reinforcing steel bars that go in those foundations, and if you’re working in a tough geotechnical scenario, like you’ve got poor soil conditions, that’s a big advantage.”

In most cases, mass timber can take the place of a range of conventional elements, but concrete and steel remain important components.

Structurlam, for instance, uses a large number of steel connectors in its products, while both concrete and steel are also still typically integral to building foundations. Taller timber towers often require a hybrid approach above ground as well. Brock Commons was built atop a concrete podium and includes a pair of reinforced concrete stairwell cores to provide lateral stability.

In fact, “acceptable systems” under the NBC changes will allow for towers that use 12-storey mass timber structural systems for vertical gravity loads, but not lateral loads, Karacabeyli notes. In high seismic zones, such as Vancouver, timber towers relying on lateral systems will only be allowed to reach six storeys, while they will be allowed to be built to 10 in low or moderate zones — Toronto, for instance. In other words, to reach the full 12 storeys under the new code, mass timber towers will either need to be hybrid, or face addition scrutiny from a municipality, or other authority, under what’s known as the “alternate solutions” path.

The environmental benefits of wood building are another part of mass timber’s value proposition. Harvesting forests, trapping the carbon from lumber within buildings, and replanting the trees to capture still more of the greenhouse gas from the atmosphere, is widely seen as saving on carbon emissions compared to manufacturing steel and concrete, though it does need to be done properly.

Currently, about 13 per cent of all Canadian emissions come from carbon embodied within building materials and during construction, according to the Canada Green Building Council. 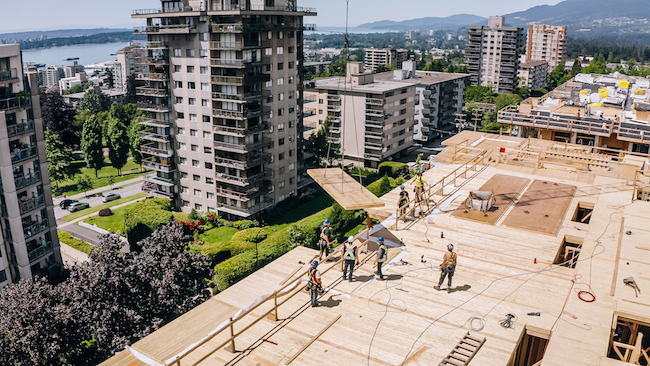 A CLT panel being hoisted into place on Adera’s Crest project. PHOTO: Adera

A life cycle assessment in the 2019 version of FPInnovations’ CLT Handbook found using CLT for a four-storey apartment building as opposed to concrete and steel would reduce the global warming potential of the building by between 40 and 60 per cent. Some studies question such findings, citing factors not accounted for in the life cycle analyses, but the main body of research points to fewer emissions for timber towers.

Despite advances in recycling in both the steel and concrete industries, among other emissions-saving initiatives, Karacabeyli says the renewable property of wood is “difficult for other materials to beat.”

He stresses the importance of proper forest management, however. In Canada, where essentially every stick of lumber is accounted for and reforestation is mandated by law, sustainable harvesting is something of an afterthought. Not all other countries, certain developing nations, for instance, meet the same standards.

With mass timber being a relatively nascent market, a number of sticking points remain.

Potentially high insurance costs for timber builders is among the steepest barriers to entry.

“The insurance industry is approaching this market with caution. Obviously, they want to reduce their risk,” Karacabeyli says, adding the mass timber industry has been working to tackle the issue and expects premiums to decline over time.

A growing pool of suppliers may also help bring costs down.

It was a luxury the industry did not have a decade ago, Karacabeyli notes. “New players are coming to the game,” he says, pointing to four CLT manufacturers that are now operational across the country.

Residential developers like Adera and other owners are also driving the industry forward.

For his part, Andreasen welcomes the added competition.

“Public opinion matters and if you don’t have a conversation about it, if it’s not something that’s a part of daily discussion, people just don’t really understand it well enough,” he says.