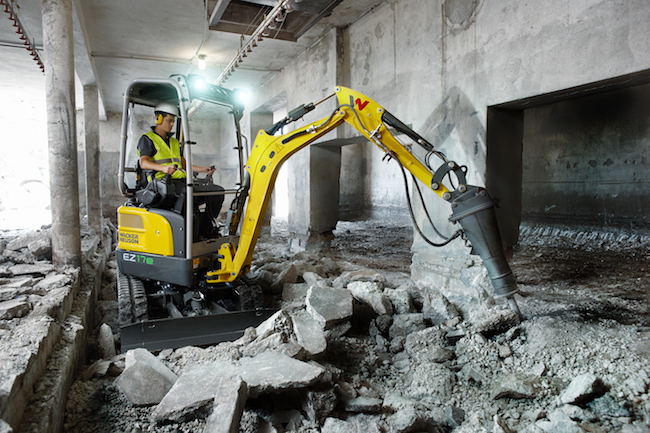 A new breed of compact equipment is starting to inch its way onto the job site.

This April at Intermat, German manufacturer Wacker Neuson revealed the all-electric EZ17e mini-excavator. One of the first machines of its kind, the EZ17e performs much the same as Wacker Neuson’s diesel-driven equivalent – with both excavators offering equal power and performance.

Thanks to the absence of a combustion engine, however, the EZ17e produces zero on-site emissions, generates little noise and requires minimal maintenance.
The new mini-excavator is one part of an industry trend towards electric and hybrid (diesel/electric) construction equipment.

The EZ17e is scheduled to launch in Europe next year and will reach the North American market in late 2019 or early 2020. It, and other compact equipment like it, is particularly well-suited to hybrid and electric systems.

For Wacker Neuson, the emphasis on eco-friendly equipment is driven by concerns about the environment, customer demand and increasingly stringent government emissions standards.

The EZ17e easily meets European Union standards set for noise and exhaust – standards that are becoming more rigorous in North America as well. Since Wacker Neuson emphasizes inner-city construction, the mini-excavator’s diminutive size and 1.7-ton weight is a bonus, making it easier to transport on a trailer and operate in crowded urban settings. As a zero tail model, there’s no rear overhang on the EZ17e, making it a handy piece of equipment for cramped spaces such as tunnels and building interiors.

The EZ17e’s lithium-ion batteries offer up to seven hours of power and can be recharged overnight using a household electrical socket, or in four hours with a high-voltage current. The mini-excavator can also be connected directly to a power source for uninterrupted use.

The mini-excavator is far from the only piece of hybrid or electric equipment the company is working on. In addition to the EZ17e, the company offers battery-powered rammers, the 803 dual power compact excavator, two electric wheel loaders, a battery powered vibratory plate and the soon-to-launch DW15e electric wheel dumper.

With customer demands evolving, last May, Volvo Construction Equipment unveiled the EX2, a fully-electric compact excavator prototype. Its maker says the zero-emission EX2 is 10-times quieter than a conventional compact excavator and 10-times as efficient.

Instead of a combustion engine, the EX2 prototype is powered by a pair of lithium-ion batteries with an eight-hour duration. Conventional hydraulic architecture was replaced on the prototype by electromechanical linear actuators. The EX1, a previous Volvo dual power excavator prototype, could also run on electricity but required a cable connection.

A commercial release date has not been set for the EX2, but Volvo continues to develop its electric portfolio. It’s currently working on what it calls an “electric site” in Sweden alongside academic and government partners. The site will test non-compact electric equipment, including HX2 autonomous battery electric load carriers, an LX1 hybrid wheel loader – which offers up to 50 per cent improved fuel efficiency – and the EX1.

The plan is to “really show how we can utilize connectivity, automation and electromobility in a [quarry site] to provide a total site solution,” Young says, adding that if all goes to plan, Volvo will begin demonstrating the electric site solutions this fall.

In addition to environmental and regulatory considerations, manufacturers see other reasons to go electric.

“There are certain advantages if you use pure electric machines besides zero emissions,” Wieland says. “It’s also very low maintenance for the engines. Usually the electric engines are maintenance free.”

Electric and hybrid equipment can be used near school, parks, offices, residential neighbourhoods and other settings where diesel machines might raise objections due to noise and smell. Silent running electric/hybrid equipment can operate into the evening, without fear of annoying residents.

“The technology opens the doors for new applications,” Young says. “It can provide our customers with an opportunity to work in different environments or in different hours of operation because you have reduced noise. You can work closer to the public because you have fewer emissions and it is quieter.”

“The machine by itself is a normal diesel machine but you can buy additionally external electro hydraulic aggregates,” Wieland says. “You can plug in the external unit and then you can operate 100 per cent emission free.”

“The TB216H was designed for customers that require a zero emissions machine,” says Takeuchi product manager, Lee Padgett. “Places like schools, hospitals, and food services are all applications where emissions and noise may be a concern.”

“The TB216H was designed to give the customer the option to operate in diesel or electric mode. It also features compact dimensions and a retractable undercarriage that allows it be transported easily and work in applications where space may be limited.”

Takeuchi doesn’t currently have any other similar equipment on the market, although it is “looking at some fully electric lithium-ion battery powered machines for the future,” Padgett says.

Caterpillar, meanwhile, offers a dual-power mini-excavator called the Cat 300.9D VPS, with a hydraulic power unit. This diesel/electric machine has an operating weight of 1,088 kilograms (2,399 pounds) and a digging depth of 1,731 mm (68 inches).

While it’s technically possible to build hybrid or electric construction equipment in a variety of sizes, compact gear seems readymade for such solutions.

“It comes down to the power and the application. With compact machines, you have a lower power demand,” Young says.

“There’s a limit to say it’s still economical to put batteries in a construction machine… When you are going into bigger classes like five-ton, 10-ton machines, you would need too many batteries. The batteries are the cost driver. We only launch products that are affordable for contractors and can run an average working day on a single battery charge,” Wieland echoes.

In general, there is a price premium on hybrid and electric equipment. Since the EZ17e hasn’t been released commercially, Wieland cannot give an estimate of the cost difference compared to the conventional version. She does say electric wheel loaders are about 20 to 25 per cent more than a diesel machine.

As with any type of construction equipment, it’s important to avoid scaring customers off because of price.

“If you look into the bigger machines, it’s really hard to implement an [electric] solution that is affordable,” Wieland says. “Our company philosophy is that the investment needs to pay off in two or three years through lower costs for electricity and maintenance because otherwise customers will not buy the machines.”

Performing well on crowded streets and in tight spaces, compact hybrid/electric technology lends itself particularly well to cities. Urban settings in turn are more likely than other locales to have the infrastructure needed to run full-electrics. “You have charging stations, you have access to power,” Young says.

Given this, it makes sense for manufacturers to go fully-electric with compact equipment first.

Hybrid equipment, by contrast, has an edge in terms of recharging because machines can operate in either diesel or electric mode.

While the all-electric EZ17e and EX2 haven’t hit the market yet, it’s safe to say that the trend towards electric and hybrid construction equipment – particularly compact gear – will continue.

“With ever-increasing emissions regulations and a push for more clean energy, I see the demand for electric machines increasing in the future,” Padgett says. “Electric machines are much cheaper to operate with less maintenance than their diesel equivalents so as battery costs decrease and run time increases between charges you will see more and more applications going to electric over diesel.”