Formless: How shotcrete is changing timelines, concrete crews and the jobsite 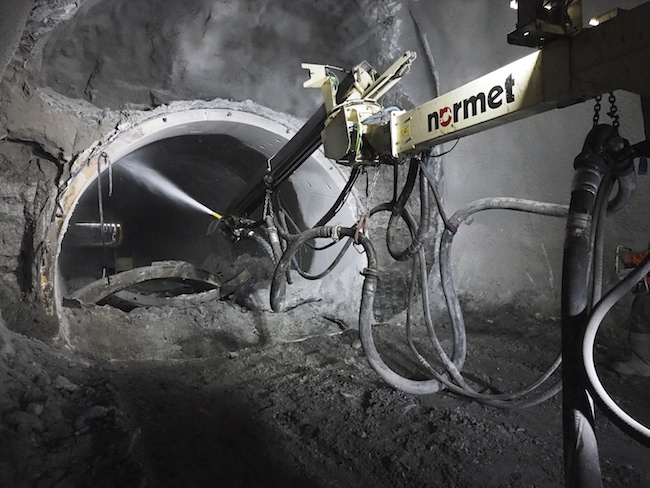 Formwork has been a mainstay on construction sites for generations. The familiar timber, metal or plastic forms that support freshly-placed concrete as it sets aren’t about to go extinct, but they’re facing increased pressure from a method that can shave valuable days, or even weeks, off project timelines.

“When you look at our industry right now, time is money,” says Ryan Regier, contracts manager with Ontario-based HCM Shotcrete. “The less you can disrupt a road or a sewer or a dam, the more efficient and the lower cost your overall project’s going to be.”

Shotcrete, a century-old technology that has undergone something of a renaissance over the past two decades, is reaping the benefits of these shifting project priorities. The method uses a hose and pneumatic pressure to spray concrete at high velocity, allowing crews to forego all or most of the formwork needed for a traditional pour. The nozzle and high pressure involved also mean the compaction stage is built into the process. Unsurprisingly, sprayed concrete is another common name for the method, which has both dry- and wet-mix offshoots. The dry-mix technique is also still occasionally referred to by its original name, gunite.

Over the past 20 years, a wider pool of skilled nozzlemen, improved machinery and mix technology and an increased emphasis on time and labour savings on job sites have accelerated adoption of the technique.

Industry experts expect the shift to continue as a growing roster of contractors look to shotcrete for everything from reinforcing tunnels to rehabilitating bridges.

There’s a common subterranean theme attached to many of the larger-scale projects currently putting shotcrete crews to work.

“You cannot build underground by excavating out the width of football fields and filling it back in anymore,” says Andrew Stewart, general manager for Northern Ontario at Lafarge Canada Inc. “It’s just too expensive, let alone the fact that this infrastructure is under or directly adjacent to buildings, parking garages and houses.”

The sprayed concrete method is also being adopted for small underground civil works such as sewers, according to Lihe Zhang, president of the American Shotcrete Association (ASA) and engineer at Delta, B.C.-based LZhang Consulting & Testing Ltd.

“In the past 10 years, there’s more and more jobs the final lining itself is being built by shotcrete,” he says, pointing to Metro Vancouver’s Seymour-Capilano Twin Tunnels, which connect much of the city to its water supply.

As more and more Canadians flock to a handful of large cities across the country, the need for infrastructure and housing has forced the construction industry into overdrive. A number of public sector players have already embraced shotcrete; private builders aren’t about to be left out. They’ve adapted the technique to demanding projects with tight timelines and often compact worksites.

In most of Canada’s major hubs, for instance, high-rise contractors are turning to wet shotcrete to form concrete foundation walls on freshly-excavated sites. It replaces the one-sided formwork traditionally placed against the rock.

“Some types of rock will deteriorate rapidly once exposed to air for the first time in thousands of years, which is why shotcrete is a quick and effective way to stabilize the rock and continue to build,” Stewart says.

Toronto, far and away the country’s largest high-rise market, isn’t far behind.

The use of shotcrete on smaller scale projects within cities, such as new residential foundations, foundation repairs and swimming pools is also becoming increasingly common.

According to ASA research, shotcrete can translate to timeline savings of between 33 and 50 per cent, compared to the traditional cast-in-place method. The industry association with members across North America also cites savings on cranes, hoists and other related equipment unnecessary when shooting concrete into place from a distance.

The potential for time and cost savings don’t end when moving above ground.

Regier concurs, saying the process lends itself particularly well to the rehabilitation of culverts, bridges, underpasses, silos, tanks and digesters. He notes a recent HCM job for the Ministry of Transportation of Ontario that involved rehabilitating a culvert outside Barrie, Ont.

“Instead of sliplining the concrete boxes over it, we ended up just reshooting the areas that needed to be rehabilitated,” Regier says. The method saved on time, materials and, perhaps most importantly for roadside work, resulted in no highway obstruction.

While Regier has no expectations of shotcrete replacing cast-in-place on easy-to-access sites where double-sided formwork is not a challenge, he says it’s a different story on compact sites, or for jobs with hard-to-reach areas. Concrete mixes used for shotcrete cost more than those used for cast-in-place, but planners are often able to make up the investment through timeline and personnel savings.

Like all aspects of construction, shotcreting is an acquired skill.

“You can’t just take any guy that’s familiar with pouring concrete and throw him on the shotcrete team and assume he will pick it up that quick,” Regier says.
“There’s definitely a training and a learning curve that the guys have to take on.”

While the sentiment is true for the whole crew – from the hose tender to the finishers – it’s the nozzleman who truly makes or breaks a shotcrete operation.
“The nozzleman is the key,” Zhang says. “If a nozzleman doesn’t know what he’s doing, he could do a low-quality job and most important, could hurt himself and his crew.”
The American Concrete Institute began offering a concrete nozzleman certification in the late 1990s. Today, Zhang says the certification is a basic requirement for landing a job shooting concrete for commercial projects.

“That’s like a driver’s license for people that drive,” he said, noting that recruits must log a minimum of 500 hours of shotcrete work, as well as pass written and practical exams before they can be certified.

As the industry has matured, however, many markets have moved away from handheld systems in favour of mechanical equipment.

“Nozzle carriers have become the norm in many parts of the world,” says Robert Harmon sales manager for Shotcrete Technology at pump manufacturer Putzmeister America Inc. “They allow for higher output than handheld. They also keep the operator/nozzleman away from the actual application point.”

For both methods, Harmon says the fundamental knowhow – how to apply material at the proper thickness – is the same. The trick is teaching a handheld operator how to use the control system. At times, he says, even an excellent handheld nozzleman may not be able to master the remote control on a sprayer.

Europe has widely adopted the newer technology, but the Canadian and U.S. shotcrete markets remain somewhat reluctant to give up their handheld systems.

“Some are firm believers that the hand application is better,” Harmon says.

Adding to the mix

Improved access to skilled workers and modern equipment have each played a role in the shotcrete industry’s growth, but they aren’t the only factors.

A variety of new concrete mixes have made sprayed concrete far more adaptable.

“The quality of fibres has greatly improved in recent years, especially with synthetic materials giving shotcrete improved tensile strength,” Stewart says. “With the admixtures available to delay set times and improve flow, we can pump shotcrete through steel pipes for kilometres, which opens up applications deep underground and difficult places to access we previously wouldn’t consider.”

Stewart says Lafarge is continuing to work on ways to adapt the high-density fibres used in some of its cast-in-place mixes to shotcrete.

“In my mind, it’s just a matter of time before we figure out a way to spray it, instead of placing it into a form,” he says. “When you think about the amount of infrastructure… across our country that imminently needs attention, it could be a very valuable repair solution.”

Harmon also points to the quality of the new shotcrete mixes as a vital development. “Equipment builders have updated control systems… but the functionality of the machines is the same,” he says. “What has changed is the quality of some of the mixes.”

Despite the significant foothold shotcrete has gained in Canada’s construction industry over the past two decades, there’s plenty of room for wider adoption. “We’re still going through the tried and true methods of the past,” Regier says.

With more versatile admixtures and a clear payoff, the experts predict shotcrete will carve out a wider niche both underground and above.

This article first appeared in the August 2018 issue of On-Site. You can check out the full issue here.
Print this page
Tweet

Related
Calling all crews: show off your best project in concrete or masonry to win a trip to WOC 2013
American Concrete Institute releases 2015 manual of concrete practice