This Canadian made device is designed to protect high-risk workers. 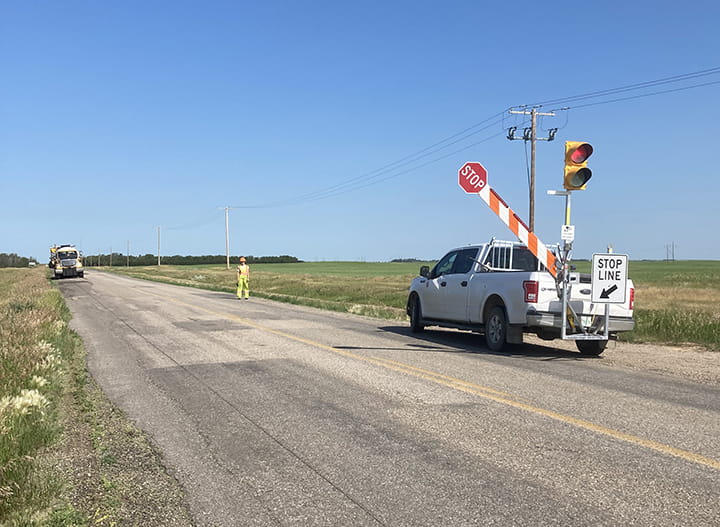 The Saskatchewan Ministry of Highways has launched a new pilot program designed to protect at-risk employees that are working on highway construction sites.

The Guardian Angel is a made-in-Saskatchewan remote controlled, automatic flagging assistance device, and the province is currently testing three of them in work zones.

Because the devices are truck-mounted and operated via remote control, the flagperson can control traffic while standing roadside, removing much of the injury risks they would normally face when standing on the road.

“Flag persons often have close calls with motorists who do not slow down or pay adequate attention while traveling through work zones,” Highways Minister Fred Bradshaw stated in a press release.

Because this model is mounted on a truck, it’s perfect for work like road patching and maintenance, as the truck can simply be driven along as the workers shift up the roadway.

The device, currently being employed by highway work crews in Moose Jaw, Outlook and Prince Albert, was built by Watrous, Sask.-based Guardian Angel Auto Flagger Manufacturing, which had a specific mandate when creating this project.

“Our goal is that all flaggers and emergency crews make it home to their families each night,” says Edward Anderson, the company’s marketing manager.

In 2021, which is the second of Saskatchewan’s 10-year Growth Plan that involves building or upgrading 10,000 km worth of highways, the province will upgrade over 1,350 km of its highways.