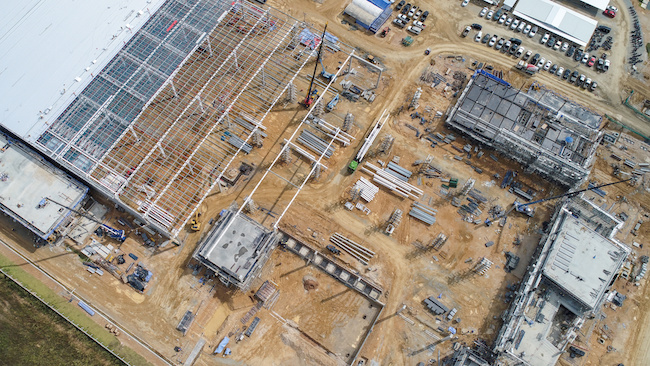 Sensors keep track of the many moving parts on a job site, providing a real-time view into the many facets of a project. PHOTO: Adobe Stock/Bannafarsai

On construction sites, less and less is going unnoticed. The days of leaving concrete unattended, for instance — swinging the gates to the job site closed at the end of the night and trusting the heaters and hoarding to do their jobs — are on their way out.

Sensors are making the transition possible. Each device measures and transmits reams of neatly-arranged data, spelling out key information, such as humidity, vibration, concrete maturity, temperature and the presence of water. The individual data points are valuable, yet bundled together, they create a living snapshot of the job site, turning the issues management process from reactive to proactive, and enabling contractors to catch problems before they occur.

Latium’s Job Site Insights (JSI) platform is built to tackle these longstanding issues and keep sites running smoothly. Hardware and software agnostic, it pulls data from a disparate array of sensors, funnelling it into a single interface that arms both on-site and head office staff with the information needed to make decisions based on hard evidence as opposed to guesswork. Temperature and humidity sensors track potential issues with millwork and hardwood flooring; leak detectors keep tabs on potential water damage; sound and vibration sensors listen for possible noise violations or damage to adjacent buildings.

Even tracking something as mundane as the weather has its benefits, said Bryant, who is also chief information officer at PCL Construction.

“The weather person in Toronto gives you the Pearson International Airport weather, which has no relevance to downtown Toronto, which is sitting beside one of the Great Lakes,” he said. “So, understanding the weather helps us from a safety perspective, but it also helps us from a construction scheduling perspective. We don’t want to be pouring concrete if there’s going to be a storm system moving in in an hour because it’ll have an effect on the quality.”

Under Bryant’s direction, PCL spent the past several years building out JSI, mostly in response to growing demands for delivering smarter buildings through smart construction. Earlier this year, JSI and a similar tool from Latium, known as Yonder, were merged. The combined platform maintained the JSI name, but now falls under the Nishku, Alta.-based tech firm’s banner. Bryant joined Latium as CEO as part of the merger, while also maintaining his post at PCL.

While JSI brought the construction expertise, Yonder contributed the industrial know-how. The joint Internet of Things (IoT) platform serves contractors, as well as energy and mining industry clients such as Enbridge, TC Energy and Trans Mountain on issues like pipeline tampering and corrosion.

On the construction end, cutting down on the number of interfaces project managers and other key personnel need to juggle is a critical aspect of the software.

“You’ve got people at the workface of construction that need to build efficiently,” Bryant said. “We’ve given them a lot of digital tools, but they’ve got a dozen of them that they need to go to — one for scheduling, one for project management, for safety, etc. What we’re doing with Job Site Insights is creating a single pane of glass where all those applications and services are under one login, under one umbrella with the data information fused together to really enable simplicity and insights.”

JSI is able to integrate any third-party sensor that “speaks” LoRaWAN, bringing the data streams into a single display. In this sense, the IoT platform does not try to replicate existing tools like embedded concrete sensors or leak detection systems, but unify them.

“It doesn’t make sense to go out and build a 3D photogrammetry piece of software, if we’ve got a great partner in the ecosystem that we can tie into the interface and marry their data with the data that we’re already collecting,” Bryant said.

Prior to the pandemic, relatively few Canadian contractors were ready for a smart construction platform, Bryant said. Eighteen months later, COVID-19 has forced a slew of everyday processes online, with little chance of a backslide to old ways of working. As builders add more digital tools to their belts, they will simplify operations and learn more from their data on a project to project basis by turning to unifying solutions like JSI, he said.

And the benefits extend beyond the job site.

“We personally believe that water detection and prevention and sensory during construction and post-construction will be as mandatory as fire suppression and detection, simply because the insurance industry is getting clobbered with claims,” Bryant said.

The knock-on effects of addressing project risks can lead to a reevaluation of a contractor’s risk profile and changes to insurance or builders’ risk premiums.

“Akin to if you put a Club and a third-party alarm in your car, today the insurance company rewards you for doing that by reducing your premium,” he said.

On this front, Latium recently signed a strategic alliance with insurance giant Aon that can reward contractors using JSI with lower costs.

David Bowcott, the global director of Growth Innovation and Insights at Aon, said the partnership will help prevent claims from happening and speed project timelines.

“This platform will significantly help our clients navigate volatility, operationally improve, and lower insurance costs particularly during this hard construction market,” he stated in a release.

As data collection across the construction industry becomes more prevalent and more sophisticated, the sensors built into JSI and the information they collect are likely to remain in use post-construction.

Water detection systems, for instance, add value to buildings once they enter operations, and contractors are being asked to leave the sensors where they are so they get a second life after handover. “They don’t want the insurance claims in a finished building any more than we would want it in construction,” Bryant said.

The data collected also serves as the basis for the physical project’s digital twin.

“Think of the sensory as the blood vessels, the heartbeat, the lungs, the brain of that building,” Bryant said. “That sensory, if you put multiple types in, you’re really getting the pulse of that building.”

During construction, tapping into this real-time “pulse” gives contractors new insight into the building process, as well as the ability to mitigate or entirely prevent emerging risks before they escalate into major issues.