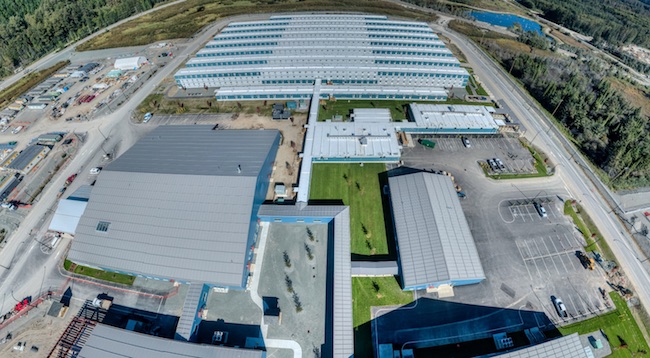 VICTORIA—Thousands of workers who would normally return to their jobs at industrial projects in northern British Columbia after the holiday break are spending more time at home in an effort to ease the strain on the region’s health-care system.

The risk of continued spread of COVID-19 has prompted the province’s top doctor to limit the number of workers allowed to return to five major industrial projects in the region over the next two months.

Dr. Bonnie Henry’s health order posted last week said many of the workers are housed in camps and close contact between large numbers of people living or working together is tied to the increased spread of COVID-19.

“The risk of an outbreak of COVID-19 arising from the mass return of large numbers of workers to worksites and industrial camps associated with the projects constitutes a health hazard under the Public Health Act,” the order says.

The directive from Henry covers two projects in Kitimat on B.C.’s north coast: LNG Canada’s construction of its liquefied natural gas export terminal and the twinning of a water tunnel that feeds Rio Tinto’s aluminum smelter.

The Northern Health Authority has confirmed just over 2,000 cases of COVID-19 so far, including nearly 600 that remain active and 27 deaths.

An outbreak of COVID-19 at two Coastal GasLink workforce accommodation sites declared on Dec. 19 includes six active infections among 53 confirmed cases. Northern Health said it’s working with the company and the prime contractor at the two worksites to ensure enhanced infection prevention and control measures are being followed.

Northern Health said in a recent statement that all 56 employees at LNG Canada’s worksite in Kitimat have recovered from COVID-19 after testing positive in November. A second and unrelated outbreak last month sickened 16 staff who have since recovered.

There have been 30 cases of COVID-19 confirmed at the Site C work camp including three active infections, according to BC Hydro, the public utility that is building the massive hydroelectric dam on the Peace River.

Henry’s order limits the number of staff allowed to return to work at each of the five projects and outlines steps the employers must take before more are allowed, including submitting restart plans for review by health officials.

Under the order, the 670-kilometre Coastal GasLink pipeline is permitted a baseline of 400 workers until Feb. 1, after which 600 more may return provided the company’s phased restart plan is approved.

“Over the coming days, we will be reviewing the impacts of the order with our contractors and putting together the best path forward possible for our project,” Coastal GasLink said in a statement posted online.

A statement from BC Hydro said the order doesn’t affect people working on the project who live locally or those working at “off-dam” sites.

“While these changes will have a further impact on our overall project schedule and cost, we understand the rationale for the order and will continue to put the health and safety of our employees, workers and the nearby communities first,” the statement read.

The Trans Mountain pipeline expansion project stretching from the Edmonton area to Burnaby, B.C., includes a site in the Northern Health region where 150 workers are allowed back as of Jan. 4. The order permits 450 more workers to arrive after Feb. 1.

A spokesperson for Trans Mountain said in an email the order applies to one work camp near Valemount and the company is reviewing the order’s impact on the workforce and schedule for the project.

There have been “a number” of positive and presumed cases associated with the pipeline project since the start of the pandemic, while health and safety protocols have helped to prevent outbreaks, the statement said.

Rio Tinto’s Kemano tunnel project was allowed a baseline of 160 workers plus 120 more as of last Friday, with no further increases until February.

Representatives for Rio Tinto did not immediately respond to a request for comment on Henry’s orders.