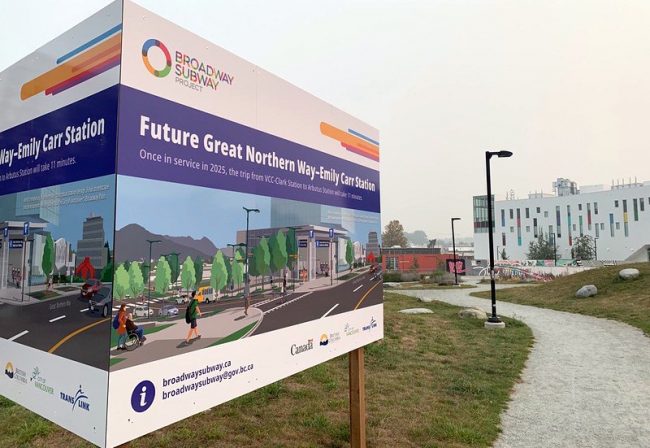 The subway extension will add six new stations to the Millennium Line. PHOTO: Province of B.C.

The demolition of several buildings along the route of Vancouver’s new Broadway Subway this winter will clear the way for six new stations and provide contractors laydown space for when major construction begins in the spring.

Buildings in the 100 block of East Broadway, as well as those in the 2500 block of Main Street, will be the first torn down, the province said in a Feb. 2 project update. Demolition is scheduled to run through April.

Crews from Acciona Infrastructure Canada Inc. and Ghella Canada Ltd. began surveying and other preliminary work last fall. The two firms are heading the design-build team in charge of the $1.7 billion construction phase of the project. Utility relocations and geotechnical investigations for the 5.7-kilometre extension of the SkyTrain’s Millennium Line also started last year.

A map of the six new underground stations and elevated guideway. PHOTO: Government of B.C.

The staging and storage space cleared over the next several months will let major construction get underway by spring. The province said this includes work on the tunnel portal and the project’s elevated guideway near Great Northern Way. Tunnelling itself is slated to start next year. All six of the new stations will be situated under Broadway and connected to the existing VCC–Clark Station via an approximately 700-metre elevated guideway.

The design team for the project — consisting of IBI Group, Dialog, Mott MacDonald Canada and Ingenieria Especializada Obra Civil e Industrial — is also expected to finalize the designs for the half dozen stations this spring.

The new transit line is scheduled to open in 2025. Costs for the subway project total $2.8 billion.